British chip designer ARM has announced three new processor designs - Cortex-A76 CPU, Mali-G76 GPU, and Mali-V76 VPU - claiming to deliver faster performance, more immersive gaming, UHD 8K visuals, and smarter AIs on smartphones of the future. The Cortex-A76 replaces the Cortex-A75 core that was unveiled in 2017, the new Mali-G76 is a replacement for the Mali-G72, and the Mali-V76 has taken over the Mali-V52 and Mali-V61. Notably, the latest architectures are part of the company's 2019 client IP platform and also complement its AI/ ML development platform called Project Trillium. The next-generation processor (CPU), graphics (GPU), and video (VPU) processor architectures are likely to be the foundation of 2019's premium line-up of smartphones.

First up, is the new ARM Cortex-A76 CPU that is based on DynamIQ technology. ARM says that it delivers "laptop-class performance" and still maintain the power efficiency of a smartphone. Talking about the recently launched ARM-based Windows 10 PCs, the company says that they deliver over 20 hours of battery life and a true LTE connected PC. Meanwhile, the new Cortex-A76 CPU is claimed to deliver 35 percent performance gain and 40 percent improved efficiency over its predecessor. The new Cortex-A76 is also said to boost AI and ML performance by 4 times. For these figures, ARM says, it is comparing the 7nm Cortex-A76 core running at 3GHz with the 10nm Cortex-A75 running at 2.8GHz. 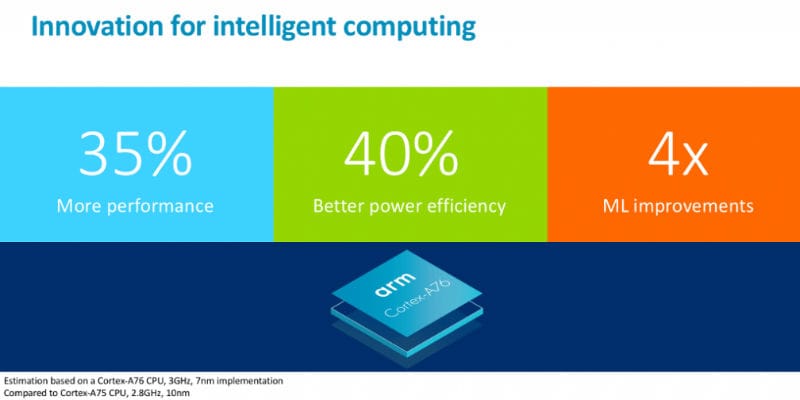 Coming to the Mali-G76, ARM says that it delivers 30 percent more efficiency and performance density than the previous version to provide developers with more performance headroom to bring more high-end gaming titles to mobile app ecosystems and enable them to write new apps that integrate augmented and virtual reality with gameplay. The company says that the gaming market is expected to reach $137.9 billion in 2018. 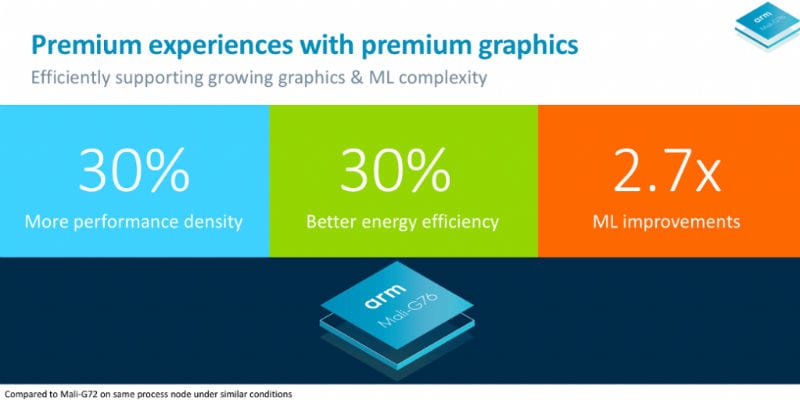 The Mali-G76 is built on the Bifrost architecture and boasts of ARM's highest ever GPU performance. The company claims that the Mali-G76 packs some serious Machine Learning punch as it can deliver up to 2.7 times ML improvements when compared to Mali-G72. More technical details about the new GPU have been provided in a blog. 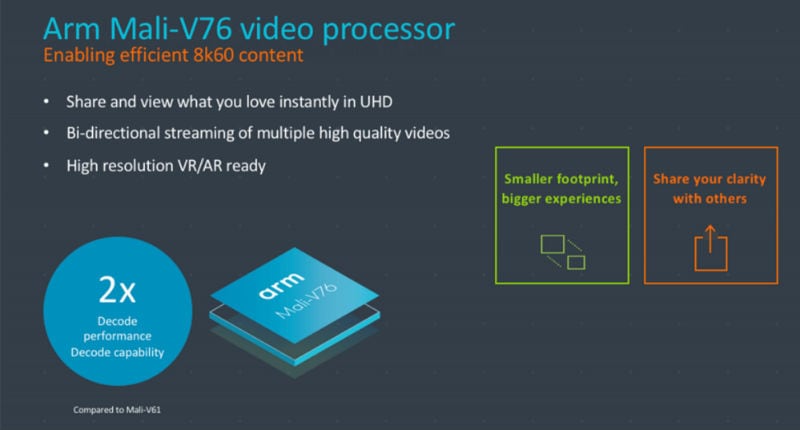 Lastly, ARM has also announced the Mali-V76 VPU designed for high-resolution displays. The Mali-V76 supports 8K decode up to 60fps or four 4K streams at 60fps, which lets users stream four movies, record video while video conferencing, or watch four games in 4K, the company claims. And at lower resolutions, and still at full-HD, Mali-G76 promises to support up to 16 streams of content, creating a 4x4 video wall. The VPU has 2x decode performance, is 40% smaller than its predecessor, and has a 25 percent encode quality improvement. ARM has provided technical details in a blog.