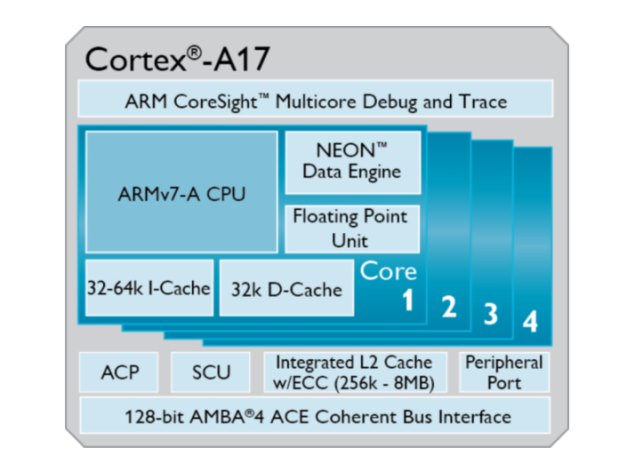 ARM has announced its new Cortex A17 processor and Mali-T720 graphics processor for mid-range tablets, smartphones and other consumer electronics. The new processors can be licensed by ARM's partners, who manufacture their own chips based on ARM's architecture building blocks.

The new Cortex A17 is an update to the A9, ARM's existing solution for the mid-range market. The company claims that the A17 is up to 60 percent faster and more efficient than the A9. Consumer products based on A17 could launch as early as 2015, priced under $200 (approximately Rs. 12,450).

Processors and System-on-a-Chip (SoC) designs based on the A17 could have up to four out-of-order cores based on the ARMv7-A instruction set, and a common integrated L2 cache. Four additional low-powered Cortex A7 cores in a big.Little configuration, which is ARM's trademark for a combination of high-powered and low-powered cores which hand off tasks to each other depending on a device's workload and power demands.

ARM's partners can also integrate the new Mali-T720 graphics processor and additional Mali-V500 video accelerator and Mali-DP500 display controller, or use similar logic from other companies within the ARM ecosystem.

In addition to phones and tablets, ARM expects to see the A17 show up in smart TVs, set-top boxes, cars, embedded devices and a variety of other product categories in which space, heat generation and power consumption are critical to the overall design. Implementations running at 2GHz and above with four A17 and four A7 cores will be viable for tablets and performance-oriented phones, but the clock speed and number of cores can scale downwards in cases where power and heat management is more critical.

Mediatek, Realtek and Via are amongst the companies who have committed to developing new silicon based around the A17 and its companion products.