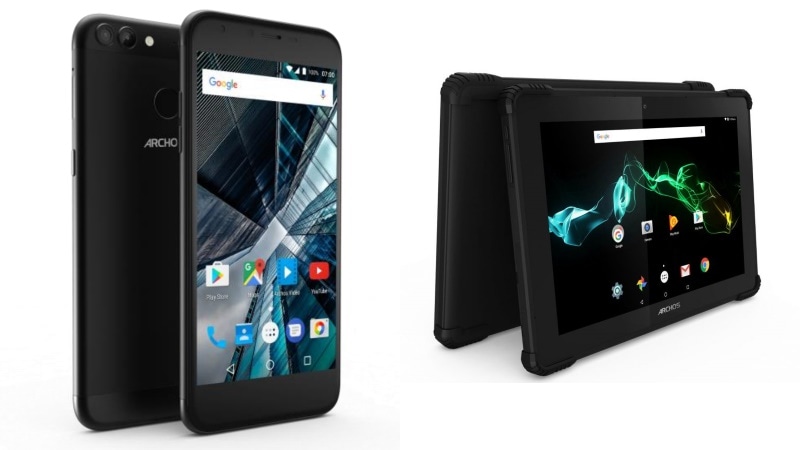 With only three days left for the Mobile World Congress to kick off in Barcelona, the France-based company Archos on Friday announced three devices to create some buzz. Archos has announced two smartphones - 50 Graphite and 55 Graphite, and a rugged tablet - 101 Saphir. The smartphones feature top-end specifications while the tablet is designed for outdoor use. All the models will be showcased at Archos' booth, however the exact price and availability details will be provided by the company later in June along with the official launches. All three devices run Android 7.0 Nougat.

Start with the smartphones, Archos 55 Graphite is a dual-SIM 4G smartphone that features a 5.5-inch HD (720x1280) IPS display with 2.5D contoured edge. It is powered by a 1.5GHz quad-core MediaTek MT6737 SoC coupled with 2GB of RAM. It runs on Android 7.0 Nougat. The Archos 55 Graphite packs 16GB of inbuilt storage that's expandable via a microSD card (up to 128GB).

For optics, the 55 Graphite has a dual camera setup of 13-megapixel autofocus and 2-megapixel along with a flashlight module. The additional 2-megapixel camera is for better depth-of-field 'bokeh' effect. On the front side, it has a 5-megapixel camera. The rear side of the smartphone is also equipped with a fingerprint scanner, which can take up to 5 different fingerprints as claimed by the company. It packs-in an 3000mAh battery with Android Nougat's Doze 2.0 feature. It also supports 'super-fast' charging via a USB Type-C port.

The lighter version - Archos 50 Graphite - is also a 4G dual-SIM supporting smartphone. It houses a 5-inch HD (720x1280) IPS display with the 2.5D curved glass. It has 1GB of RAM with 16GB of internal storage that's expandable via microSD card (up to 128GB). Rest of the specifications are touted to be similar with the Archos 55 Graphite - however Archos goes on to say that specifications may vary by region.

While the exact price details have not been revealed by the company, the devices will be launched in June this year and will be priced starting EUR 130 (roughly Rs. 9,200). As said, it will be available in select regions.