The Cupertino giant also reiterated its vow to power all of its stores, offices and data centres with renewable energy. Apple on Monday also released a video with CEO Tim Cook narrating the company's efforts to protect the environment. "To us, better is a force of nature," Cook says in the video.

Apple's green announcements, apart from being timed to precede Earth Day 2014, followed a recent Greenpeace report that described it as a company that was "the most innovative and most aggressive in pursuing its commitment to be 100 percent renewably powered."

The Cupertino-based company said that all four of its data centres, which are located in North Carolina, Oregon, Nevada and California, already rely entirely on renewable energy. The electricity comes from a variety of alternative sources, including biogas, as well as wind, solar and hydro power.

Following up on its Earth Day announcements, Apple released an advertisement in a UK newspaper that was brought to global attention via an AppleInsider reader. The ad features an image of a large solar array, with the line "There are some ideas we want every company to copy."

The advertisement is a rather obvious dig at Samsung, the rival that Apple is once again battling in court over the Cupertino firms' allegations that the South Korean firm has infringed on Apple's iPhone and iPad patents, and copied their designs and features.

With the advertisement, Apple is implying it has no problem with Samsung copying some of its ideas, specifically, those related to environmental responsibility. The ad is just the latest salvo of shots fired between the two rivals, with both companies releasing ads that mock the other's products.

Reams have been written about the two companies' war of ideas, and we rather not get into discussing both sides of the infringement issue in this article. We'll leave you with Apple's own supercilious words from the ad:

"There's one area where we encourage others to appropriate our ideas. Because when everyone makes the environment a priority, we all benefit. We'd be more than happy to see every data centre fuelled by 100 percent renewable energy sources. And we eagerly await the day when every product is made without the harmful toxins we have removed from ours." 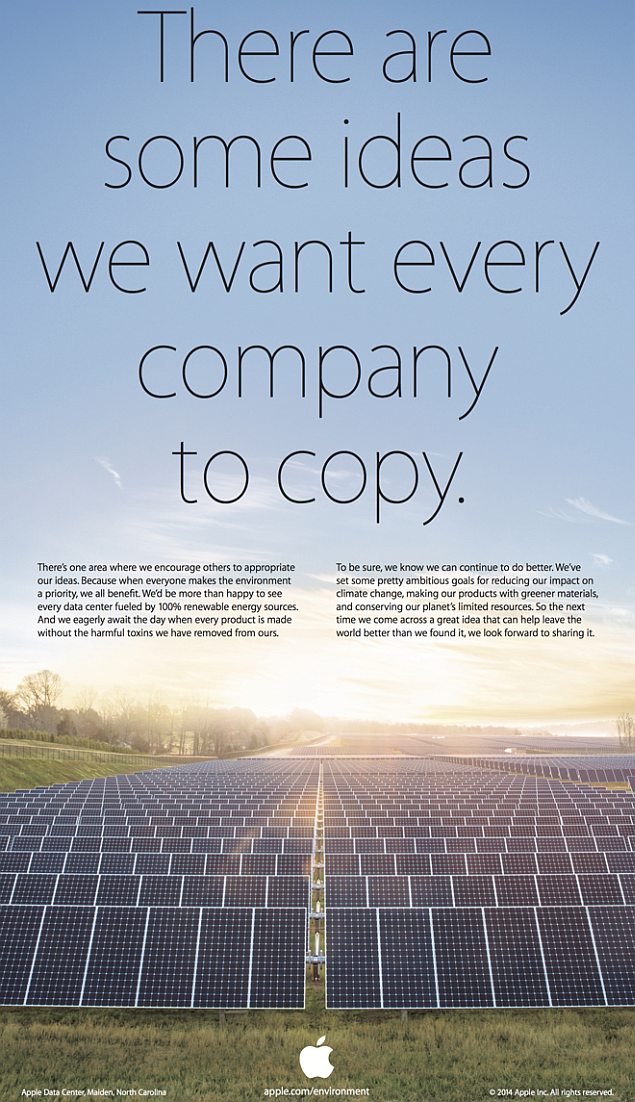