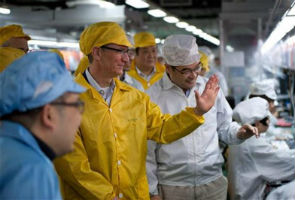 An influential American lawmaker has expressed concern on the harsh and often-dangerous working conditions faced by workers in Apple's China-based factories and asked the company to report to it on the improvement of working conditions of its facilities in China.

"Workers making popular products like iPads and iPhones consumer goods that sell for hundreds of dollars in the United States-can toil under the harshest conditions thousands of miles away in China, often for just over a dollar per hour," said Senator Sherrod Brown, who chaired a hearing of the Congressional-Executive Commission on China (CECC).

"Apple should move quickly to fulfill its promises to improve working conditions in its supply chain and keep the American people informed of its progress in this regard," he wrote in a letter to Apple CEO Timothy Cook.

American consumers, he said, want to be assured that the products they buy are made by workers whose dignity and basic human rights are respected.

"I was encouraged by Apple's commitment to addressing reports of the harsh conditions reported at numerous Chinese factories that manufacture Apple products. Harsh working and living conditions have been reported not only at Apple-producing facilities run by Foxconn but at other Apple suppliers as well," he wrote.

Brown said as reports indicate, Chinese workers who make iPads and iPhones have often toiled long hours under dangerous conditions for little pay. The Chinese government does nothing to stop these abuses, and workers in China lack the basic right to freedom of association.

The result is that Apple shoulders a great responsibility for improving working conditions and providing workers with a voice, he wrote.