Apple has allegedly made changes to iOS that deliberately scale down the performance of older iPhone models as their batteries degrade beyond a certain point, according to findings by smartphone performance testing firm Geekbench. In a blog post, the company says that its analysis of the scores of iPhone 6s devices running iOS 10.2.1 as opposed to iOS 10.2 show that there are now multiple points where scores cluster, below the single average point that was previously observed, and is typical of multiple tests running on the same device.

This change, as a result of a seemingly minor software update, suggests that the company has knowingly reduced the performance of some devices. The effect is even more pronounced with iOS 11.2. A similar analysis of iPhone 7 scores shows a typical concentration of scores at one level up until the release of iOS 11.2, when the same pattern of several clusters at lower levels emerges. 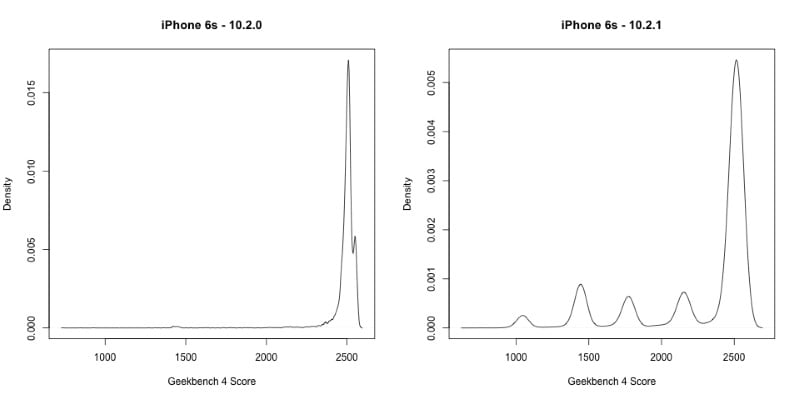 The investigation was sparked by a Reddit thread started by a user who claimed that his iPhone 6s had been running frustratingly slow, and that the problem went away after a battery replacement. He or she ran Geekbench before and after the battery swap, and the scores increased drastically. The original battery had a wear level of only 20 percent. The original post suggested that Apple deliberately lowers performance as its batteries degrade in order to make iPhones last just as long on each charge. Other Reddit users also reported seeing significantly lower performance with lower charge levels despite not having Low Power mode enabled.

Geekbench's blog post correlates the release of iOS 10.2.1 to instances of iPhones shutting down abruptly earlier this year, after which Apple offered a battery replacement programme. If the problem was caused by batteries failing to deliver a certain voltage threshold, Apple could have attempted to reduce power draw with a software update. It's also possible that throttling was introduced to mitigate thermal problems with older batteries. However, as Geekbench points out, this would amount to a deliberate reduction of performance without notice to users, and would also seemingly confirm anecdotal stories that Apple and other manufacturers deliberately make older devices slower in order to compel people to upgrade frequently.