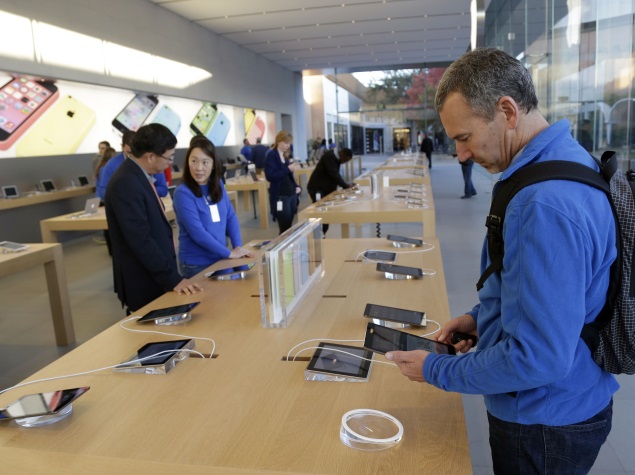 Apple Inc shares were on track Wednesday for their worst day since January ahead of the launch of its newest iPhone, with at least one brokerage mulling a stock downgrade unless its new products show better promise for profit growth.

Shares of the smartphone maker slumped 4 percent - its worst percentage drop since late-January - as Apple faced scrutiny of its security systems after photos of celebrities stored in individual iCloud accounts were leaked online.

The stock lost $3.57 to $99.15, with 87 million shares changing hands, already exceeding its 50-day moving average of 45.8 million shares traded daily and putting it on track for one of its busiest days of the year.

In a note Wednesday, Pacific Crest Securities analyst Andy Hargreaves said it was time to take profit in Apple ahead of the phone launch, scheduled for Sept. 9.

"Unless next week's event details massive incremental profit opportunities, we are likely to downgrade (Apple's) rating," he wrote.

Some saw the decline as a reaction to Samsung Electronics Co's introduction of its own large-screen smartphone.

Apple said photos of celebrities, including Oscar winner Jennifer Lawrence and swimsuit model Kate Upton, that were leaked online were done through the targeting of individual iCloud accounts, and not through a breach of Apple systems.

The leak has put Apple's security in the spotlight just days before it is due to launch its iPhone 6.

Still, even with the stock's drop, activity in the options market points to bullishness ahead of the iPhone launch.

The last two weeks saw bullish call bets outnumbering bearish puts by a ratio of about 7 to 3, according to Credit Suisse data, but on Wednesday, calls and puts were about even.

"Despite the recent events, I am still very bullish on Apple as they have a number of new products coming out such as wearables and a new bigger iPad," said Naeem Aslam, chief market analyst at Dublin, Ireland-based Ava Trade.

Apple straddles that expire Sept. 19 are pricing in a 3.9 percent move in either direction by that date, said Ed Tom, managing director of equity derivatives trading strategy team at Credit Suisse in New York.

"That was a bullish trade and it is the closest expiration (following the Apple event)," Overby said.