If there was one takeaway from Apple's big iPhone event Tuesday, it's that Apple really wants you to own its products.

Apple on Tuesday unveiled new cheaper watches and iPhones and refreshed the entry-level iPad. But it also announced the pricing and release dates for new subscription services, including its long-awaited Netflix rival Apple TV+ - new ways for Apple to keep squeezing more money from consumers.

If there was one takeaway from Apple's big iPhone event Tuesday, it's that Apple really wants you to own its products, no matter what you've got in your bank account.

The latest lineup of iPhones adds more cameras for better photo quality, improved battery life and an appealing price tag. The iPhone 11, which has two cameras, starts at $699 (Rs. 64,900 in India) - less than the $1,000 at which Apple has priced its main new phone the past couple years, and potentially priced to woo consumers on the fence about buying the newest Apple offering. That $1,000 price point now belongs to the iPhone 11 Pro, which has three cameras.

The big question for customers is whether the new features or price points could make yet another upgrade worth it, or whether they want to hold on to an existing device for another year or two - an increasingly popular option. Consumers now own their smartphones for an average of three years, dampening sales across the industry.

With slowing iPhone sales, Apple has been turning to its growing selection of services to help bring in more revenue. On Tuesday, the company announced the pricing for two of its newest subscription products launching this year: Apple Arcade and Apple TV+ (both Rs. 99 a month in India).

If you go all in on every Apple offering, you could pay the company $479.40 a year. That's for Apple Music, News+, iCloud, Apple TV+, and Apple Arcade. It doesn't include Apple Care (another $9.99 a month for the basic option), or any of the money you might spend on à la carte books, movies, TV and apps from the App Store.

Apple's pricing was perhaps the most significant news of the day because it was a stark reminder of how the company is evolving from a high-end hardware-maker into a mass-market digital services provider. Apple's subscription prices, half of what some competitors charge for entertainment and video game streaming, are meant to attract broad audiences, not just people who can afford thousand-dollar phones.

Each new Apple product serves as a hook that keeps customers from leaving Apple's restrictive ecosystem. Its watches are much less useful without an iPhone and its popular AirPod headphones are nothing special on non-Apple products. Already, Apple's proprietary iMessage and Facetime apps are dissuading customers from dabbling in Android.

Apple lowered prices on its older watches and announced a new iPad to entice students and other mainstream customers. Apple wants to push its global "installed base" of 1.4 billion people higher. Each product they own or service they subscribe to could turn into a reason they decide to stick with Apple, even when competitors like Samsung, Google and others offer cutting edge hardware with more bells and whistles.

Apple hosted the event in the underground Steve Jobs Theater located on its Cupertino, California, campus, where chief executive Tim Cook and various Apple executives took turns onstage hyping up and demonstrating new features. Cook kicked off the event with a briefer than usual introduction, after saying Apple makes "products and technology that are designed in the service of humanity."

This is the year of the iPhone 11, returning to Apple's usual naming style after a brief flirtation with Roman numerals for the iPhone X.

Apple pitched better pictures as the draw of the new phone. It has dual cameras: wide and ultrawide 12-megapixel cameras.

Apple has also updated some of its camera software. The company says it can better detect subjects and relight them. It has added a night mode to take better photographs in dark situations that might normally be un-photographable.

The front-facing camera is getting a quality bump as well and can now shoot slow-motion selfies. Apple is dubbing them "slowfies."

What's better than two cameras? Three cameras, according to Apple. The company announced a pair of new high-end smartphones: the 5.8-inch iPhone 11 Pro and 6.1-inch iPhone 11 Pro Max. What really makes the Pros high-end is the trio of cameras on the back of the device, which Apple says will let users take professional quality photographs and 4K videos. The devices start at $999 (Rs. 99,900 in India) for the Pro and $1,099 (Rs. 1,09,900 in India) for the Pro Max.

The iPhone 11 line is scheduled to be available on September 20.

Apple announced the seventh generation of its main iPad: a new 10.2-inch device with 3.5 million pixels that weighs about a pound. It has a smart connector to pop it onto a keyboard, works with the Apple Pencil, and runs on iPad OS - Apple's recently announced version of its mobile operating system optimised for iPads. The device costs $329 and ships September 30. There are now four iPads in Apple's lineup: the new iPad (called just "iPad," like Cher) iPad mini, iPad Air, and iPad Pro.

The changes show Apple is still pushing hard to make the iPad a valid work option, not just a rectangle for binge-watching. Apple compared it directly to laptops and demonstrated new features, like PDF editing and using the new Arcade and TV+ services on it. 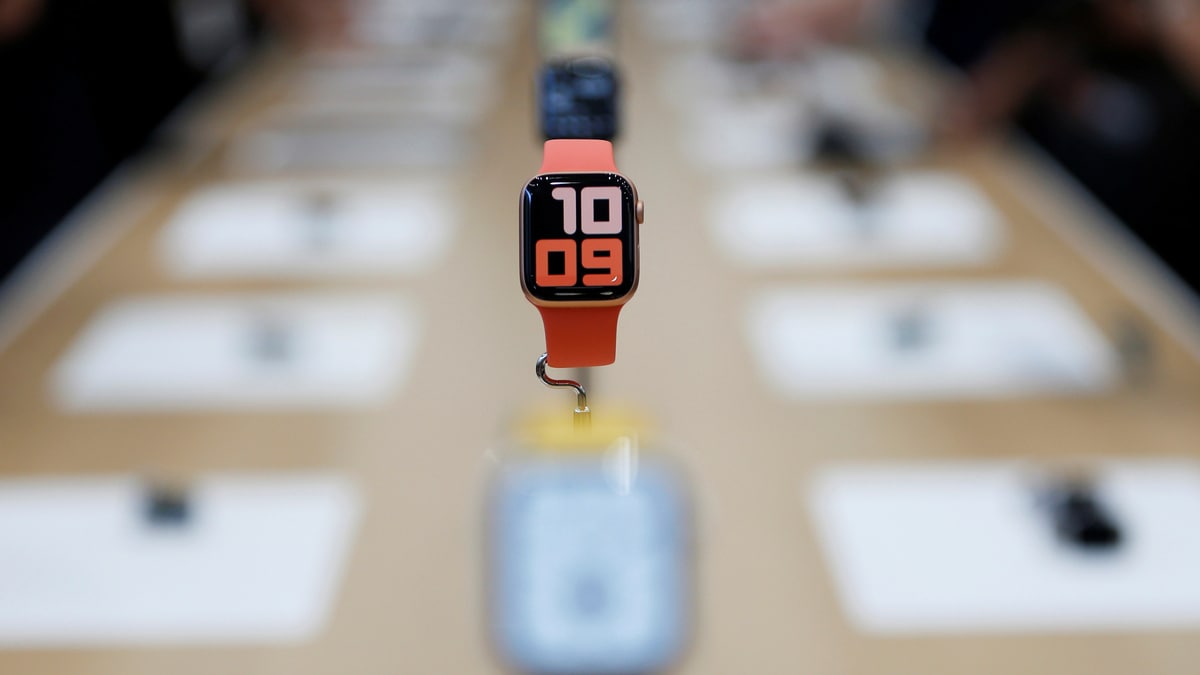 Cook also unveiled the company's new Apple Watch. A video Apple played about customers who attribute health benefits to the watch underscores how Apple sees the market opportunity for its main wearable. It's the device that Apple hopes will open the door to the lucrative health-care industry, an area analysts believe could help drive profits for the company as iPhone sales slow.

Apple's new watch, the fifth version of the device, has an always-on display. The face of previous versions of the watch turned off when not in use to preserve battery. In those older watches, sensors detect when people raise their wrists, turning the screen on. Despite the constant display, Apple says the new watch's battery lasts just as long.

In the category of new ways Apple has found to get consumers to open their wallets, two new subscription services are debuting this fall. Cook revealed new details about Apple TV+, the company's Netflix competitor that will be available on November 1. He pointed to anticipation for the service, citing more than 100 million views of trailers for its original shows, like "Dickinson" and "The Morning Show." He screened a new trailer for "See," a post-apocalyptic series in which everyone in the future is blind.

Apple's new streaming service is going head-to-head not just with Netflix but with an armada of new streaming services from companies like Disney. Some analysts had expected Apple to offer its service for a price around $10 a month. The lower price, including a year free with the purchase of a new device, reflects Apple's different approach with a smaller selection.

Apple announced the same $4.99-a-month price for its forthcoming game-subscription service, Arcade, that will have 100 games that are exclusive to Apple devices including mobile devices, Macs and the Apple TV. Arcade will launch September 19 in more than 150 countries.