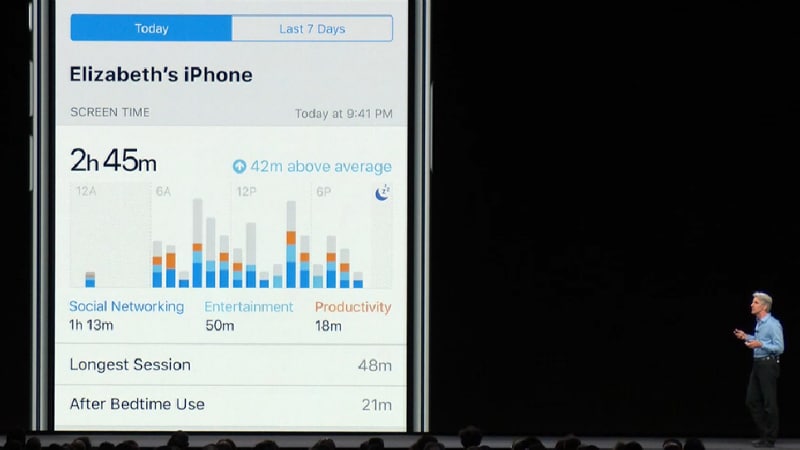 While Apple's Screen Time is yet to reach the masses, the feature is a part of the iOS 12 betas, and is now reported to have already helped a teenager drop her iPhone usage by almost half within three weeks. The ultimate aim of Screen Time is to help iPhone and iPad users understand their usage patterns and eventually limit the time they spend on screens. Similar to Apple, Google also brought an initiative called Digital Wellbeing earlier this year that will be available across all its platforms, including Android, to help users curb device addiction.

"Screen Time empowers you with both insight and control over how you spend your time, and it starts with reports," explained Craig Federighi, SVP of Software Engineering, Apple, at WWDC 2018, while announcing Screen Time. The feature offers a weekly activity summary and breaks down the data show how much time you're spending on your device and what apps you're using the most during the day or night, as well as how often you're simply picking up your phone on an hourly basis. All this helped Sophie, 14, who was volunteered for a real-life Screen Time test by The New York Times' Brian X. Chen.

During the course of three weeks, it was initially found that like hundreds and thousands of other teens, Sophie was largely using Snapchat on her iPhone X. When she had used up her allotted time on the Snapchat app, she felt incensed and started staring blankly at the app icons on the iPhone to avoid using up her limit on the app. "It was just a pattern for me - to open my phone and would have nowhere to go," the teenager said, as quoted by The New York Times. "I was just looking at a screen. It was kind of weird, so I'm trying not to do that."

Ultimately, Chen reported that Sophie's average daily usage of her iPhone reduced by about half - from over six hours during the first week of the testing to nearly three hours and four minutes during the third week. This evidently shows how the addition of Screen Time could help users reduce their screen times and curb addiction to their devices. However, in addition to the software showing data to put a limit on the usage, there is a need for adopting habits to use mobile devices only when they are needed.

We're yet to see the mass level change through developments such as Screen Time and Google's Digital Wellbeing. Nevertheless, Sophie's example gives us the hope that technology will help us save from the adverse effects of technology. Of course, to be noted is that this is just one example, and the experience millions of users will have may well show different results.

To begin your journey with Screen Time, you need to download the latest iOS 12 beta on your iPhone or iPad. It is, however, recommended to wait for the public release of the new iOS version that will debut sometime in September.