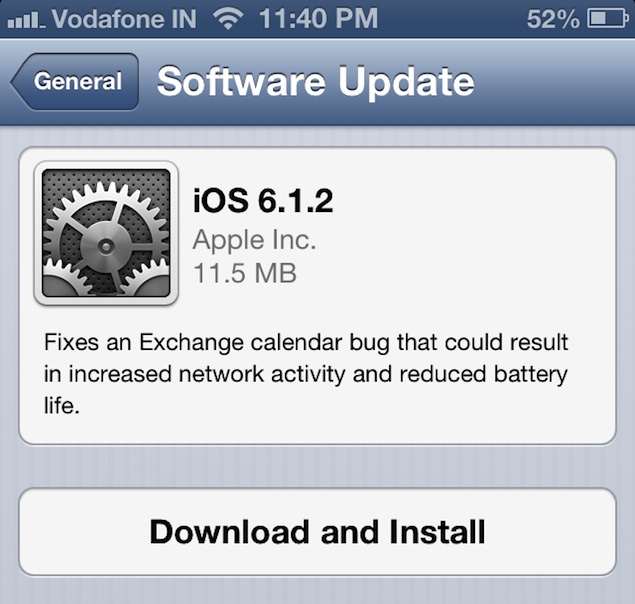 Nearly a week after promising to fix problems related to iOS devices overloading Exchange servers after being updated to iOS 6.1 due to issues with calendar sync, Apple has released the iOS 6.1.2 update to resolve the glitch. The update is available for iPhone 3GS, 4 and 4S, iPhone 5, all iPads following iPad 2 and all iPod touch devices after the 4th generation iPod touch.

The size of the update for the iPhone 4S was 11.5MB, while it was 12.8MB on the iPhone 5. Apple clearly states in the update notification screen, "This update fixes an Exchange calendar bug that could result in increased network activity and reduced battery life." The update can be downloaded over the air on the iOS devices or via iTunes on computers.

Last week, several reports had pointed out the issue, following which Apple had acknowledged the problem saying that if an Exchange user responds to an exception to a recurring Calendar event with a Microsoft Exchange account on a device running iOS 6.1, the device may begin to generate excessive communication with Microsoft Exchange Server, resulting in increased network activity or reduced battery life on the iOS device and that the extra network activity will also show up in the logs on Exchange Server, leading to the server blocking the iOS device.

Microsoft had also issued a support document advising administrators and users to not process Calendar items such as meeting requests on iOS 6.1 devices, and to immediately restart the iOS 6.1 device. It had also recommended removal and reactivation of the device partnership with the server, creating a custom throttling policy for iOS 6.1 users, and blocking iOS 6.1 users on the server.

Close on the heels of the Exchange bug, another bug was reported which allowed anyone to bypass a password protected lock screen by following a few simple steps employing the use of the power and home button, and the emergency call feature. Apple had also acknowledged the bug and had said that it would be fixed in a future update. However, ArsTechnica reports that the unlock hack bug has not been fixed after the iOS 6.1.2 update.
Comments