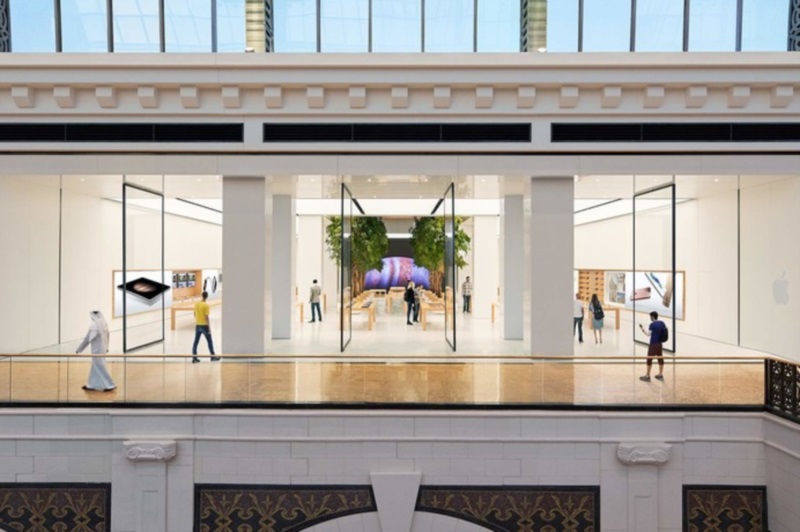 Apple opened its first retail stores in the Middle East on Thursday in the luxury malls of the United Arab Emirates, hoping to sell wealthy consumers on their new high-end smartwatches.

Apple's two new stores, at Dubai's Mall of the Emirates and Abu Dhabi's Yas Mall, find themselves alongside other global luxury brands like Emporio Armani, Fendi and Burberry. And that's no accident, industry watchers say, as Apple wants to give wealthy consumers hands-on experience with its new Apple Watch line, with some of the high-tech timepieces costing as much as $17,000 (roughly Rs. 11,00,000).

"Apple is trying to position itself, with the watch in particular, as a fashion brand - and a premium fashion brand," said Daniel Gleeson, a senior analyst at IHS. "It is looking to be part of that company alongside Burberry and Armani. ... So moving into that retail slot next to them is not surprising."

The Apple stores in the Emirates have the sleek, modern look of many of the company's other 464 retail shops around the world. At the Mall of the Emirates, 60-foot (18-meter) glass panels open up into a showroom with ficus trees and a skylight. The Apple Watch is displayed prominently.

In a nod to cultural norms in the Muslim country, staff will hold women-only workshops with customers, said Wendy Beckman, a senior retail director at Apple. Beckman gave a presentation to journalists at the Dubai store on Tuesday and refused to take questions.

Apple Inc., based in Cupertino, California, has focused its attention outside of the Middle East since beginning its retail operations in 2001. Resellers and gray-market stores filled the gap for years, with most new iPhones regularly available from mall kiosks across Dubai soon after their US release, sometimes with US mobile phone carrier SIM cards still inside them.

Van Baker, an analyst at US-based tech research firm Gartner Inc., said the move into the Emirates made sense for Apple.

"They tend to expand into new markets only when they are prepared to commit sufficient resources to the region to have a real presence," Baker said. "I suspect that these two stores will be followed shortly by additional stores in the Arab world - assuming the initial two stores are well received."

The stores' opening comes as Apple reported another quarter of record earnings Tuesday, boosted by strong sales in China despite fears of slowing consumer demand for smartphones worldwide as more and more people already own one. In the Emirates, 67 percent of all mobile phones used are smartphones, according to the government's Telecommunications Regulatory Authority.

While the iPhone 6 is the most commonly used model of mobile phone in the Emirates, with a 4.9 percent market share, South Korea's Samsung Electronics has become the most common brand with 32.6 percent of the market, according to the government. Microsoft Corp.'s Nokia mobile phones follow closely behind with a 31.5 percent share of the market while Apple ranks third with 14.2 percent.

Still, the arrival of the Apple stores this week saw Samsung's local reseller take out a massive newspaper advertisement announcing their own "reopening." But Apple's focus remains on high-end, high-spending consumers, like those willing to pay an average of $670 for an iPhone rather than buying another brand's $200 smartphone, Gleeson said.

"Having an extensive retail presence, where you're able to cater to that type of clientele that would be paying that type of money, is an absolute necessity for Apple," Gleeson said. "I think it makes a lot of sense for Apple to have that retail presence in the region now, particularly when it's looking to sell the Apple Watch there."

Terms of the Apple store openings in the Emirates aren't clear. Typically, foreign companies operating in the country's seven emirates partner with a local firm. However, there have been reports Apple negotiated a 100 percent stake in its retail sales.

Apple declined to say whether it had a local partner for its stores. Neither lists any local partner information near the store entrance, common practice for shops in the Emirates. The country's Economy Ministry and Arab Business Machine Ltd., which describes itself as Apple's official Mideast reseller, did not respond to requests for comment.