The Apple event has started, with CEO Tim Cook taking the stage to end the wait of fans who have been looking forward to the next-generation iPhones for a year. At the event being held in the Steve Jobs Theater at the company's new headquarters in Cupertino, California, Cook says the brand has created new categories of technologies that have had a profound effect on people worldwide. Apple is also set to ship the 2-billionth device running on iOS, the mobile operating system that powers iPhones, iPads, and iPod touch models. While the Apple Watch Series 4 was the first product unveiled tonight, all eyes are still on the new iPhone. Cook says the new iPhone XS takes iPhones to the next level, and it comes in Gold colour this time around along with Space Gray and Silver, unlike last year's model. iPhone XR is third, more affordable model with cheaper materials that has been unveiled today.

Apple's Vice President for Worldwide Marketing, Phil Schiller said the new iPhone XS has a 5.8-inch display and the iPhone XS Max sports a bigger 6.5-inch panel, the biggest on a mainstream smartphone. The glass on both models is the most durable ever on a smartphone, and the duo feature surgical-grade steel. They also have IP68 certification for dust- and water-resistant (up to 2-metres and 30 minutes). OLED panels with 2436x1125-pixel resolution have been carried over from the last year's flagship in the iPhone XS, while the XS Max model has 2688x1242-pixel resolution and OLED screen. 3D Touch, better stereo sound, faster Face ID with Secure Enclave are also part of the package.

Powering the two iPhone XS models is the A12 Bionic SoC, the first chip in the industry made on the 7nm process. It has a hexa-core CPU and quad-core GPU, and a neural engine, and will deliver 15 percent faster application processing than last year's A11 chip, Apple claims. The GPU, on the other hand, is 50 percent faster this time around, and AI processing as well as AR gaming and tracking without sensor are also better. CoreML runs nine times faster with 1/10th the energy now.

Now coming to the cameras, there are two 12-megapixel sensors on the back, one wide-angle camera (f/1.8 aperture) and the other a telephoto camera (f/2.4 aperture). Both have 6-element lenses, and optical image stabilisation, and the former has 1.4-micron pixels and Focus Pixels tech. Apart from this, both have an improved True Tone flash with a flicker-detection system. The front camera setup features a 7-megapixel sensor with f/2.2 aperture, an IR camera, and a dot projector for 3D facial detection. Facial landmarking will help in reducing red eye instances and in taking a better portrait mode. Smart HDR for better details and adjustable depth of field in photos are also introduced for the iPhone XS cameras.

iPhone XS and iPhone XS Max will have dual-SIM, dual standby technology, marking the first time buyers will be able to use two phone numbers on the same iPhone. In China, the new iPhones will feature two physical SIM cards, while the rest of the world will get a software-based SIM standard using the eSIMs with support from telecom carriers. From India, Jio and Airtel have been confirmed to support Apple's eSIM standard. This means we will finally be able to use two phone numbers on both the iPhones, though we will not have to use two physical SIM cards. Instead, the information for the SIM number and other details will be pushed to the handset by the telecom carrier. Both the models come in 64GB, 256GB, and 512GB options. It will go on sale for the first time on September 21, and will hit the Indian market on September 28. 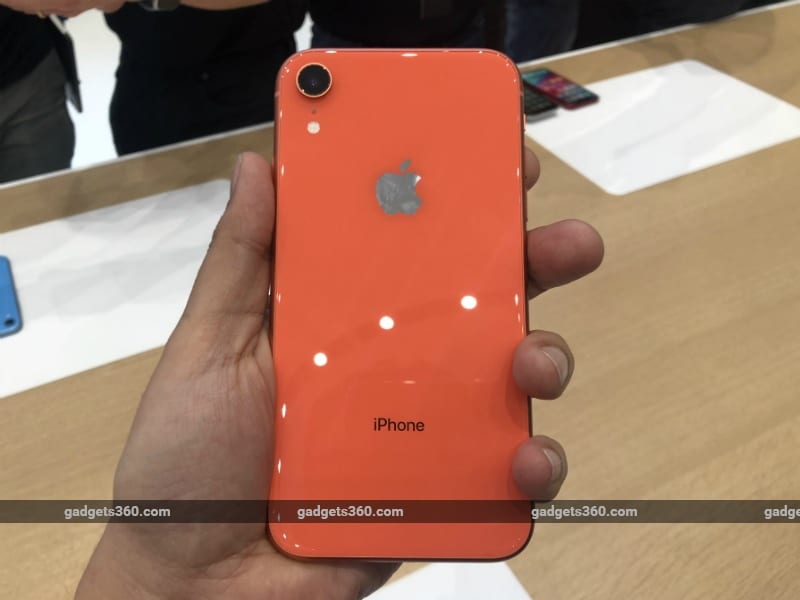 iPhone XR price in India starts at Rs. 76,900 and will come in six colour options

As for the iPhone XR, you get a 6.1-inch LCD display with 1292x828-pixel resolution, but no 3D Touch on this one. It has a single camera setup with 12-megapixel sensor, 6-element lens, f/1.8 aperture, and Focus Pixels. The smartphone runs on the same A12 Bionic SoC that powers the flagship iPhone XS models. Face ID, touch to wake up, aerospace-grade aluminium body, and dual-SIM functionality have been announced for the new iPhone XR. It will come in 64GB, 128GB, 256GB storage options. Pre-orders start on October 19, and shipping begins October 26. It comes in six colour options, namely Black, Blue, Coral, White, Yellow, and PRODUCT (RED). All three models support wireless charging.

In other iPhone news, users will be able to download the iOS 12 update from September 17. iPhone 7 price has been revised to start at $449, while iPhone 8 will now begin at $599. iPhone 6s, iPhone 6s Plus, iPhone SE, and iPhone X have been discontinued. Cook also announced macOS Mojave update will be available for download from September 24.

Jeff Williams, COO, Apple spoke about the three key functions of the Watch, namely connectivity, fitness, and health. The new Apple Watch Series 4 models sport over 30 percent larger display panels, and now measuring 40mm and 44mm. New Watch faces are also in play, with more customisations to help connect with favourite contacts. The Digital Crown has been re-engineered for more accurate control of apps, and speaker is now 50 percent louder. The smartwatch now processes data up to eight time faster, and will be able to detect when the user falls.

The Series 4 models will have an integrated ECG chip to help monitor the heart rate better and the back casing with black ceramic and sapphire crystal will let users take an electrocardiogram anytime, anywhere. This, Apple claims, is the first ECG product offered over-the-counter to consumers. The battery life of the device remains 18 hours, the company says. All of the users' fitness and health data will still be protected, Williams says.  With FDA approval already granted, the new Apple Watch model will become available "later this year." It will come in three finishes, namely Silver, Gold, and Space Gray. All the bands customers own from their previous Apple Watch models can continue using them with Series 4 models. As for the price, the model with GPS starts at $399, the variant with mobile data begins at $499, and the base variant starts at $279. Pre-orders begin September 14, and shipping starts September 21. watchOS 5 will begin rolling out on September 17.