iOS 12 Now Running on 60 Percent of All Active iOS Devices, While iOS 11 Declines to 29 Percent: Apple

In less than 30 days after hitting the benchmark of as much as 50 percent of the entire iOS family, iOS 12 has now reached at least 60 percent of all iOS devices. The latest iOS platform was released in September as the successor to iOS 11 and received its first point release in the form of iOS 12.1 just earlier this week. Apple has included a bunch of system-level optimisations such as 70 percent faster camera launch and up to 50 percent faster keyboard appearance to attract existing users. Also, there are features such as Animoji and Siri Shortcuts to persuade users of new iPhone models.

In addition to the latest iOS and its last year's version, the official data released by Apple shows that 11 percent of all active iOS devices and seven percent of the devices introduced in the last four years are using iOS 10 or earlier. This is notably flat when comparing with the data posted last month. The reason behind the identical position of the previous iOS versions could be the stability in the usage of the devices that aren't supporting newer updates after iOS 10, including the iPhone 5c and iPhone 5. 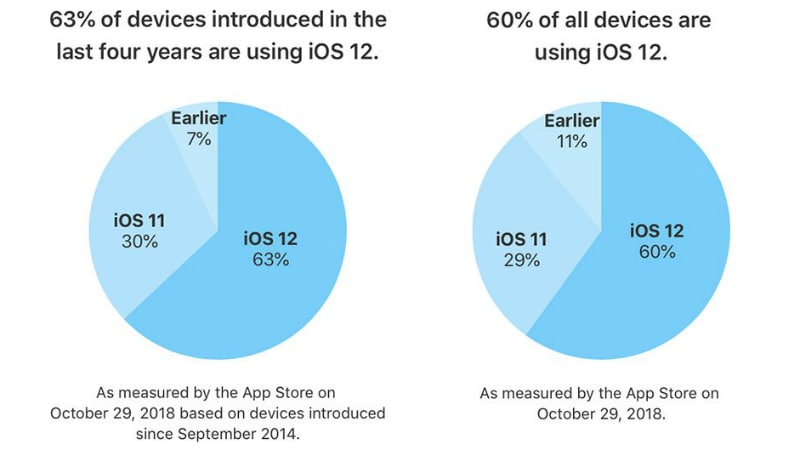 The App Store measured the new numbers on October 29, while the older results were from October 10. This shows the period when the Cupertino giant launched the iPhone XR that comes as the most affordable model in the 2018 iPhone family. The new cheaper iPhone in the range runs iOS 12 out-of-the-box. Thus, it could be one of the key contributors to the success of the latest Apple platform.

Unlike the early growth of iOS 12, Google's Android Pie that was released back in August is yet to open an account on Android Distribution Chart and is still on less than 0.1 percent of Android devices, as per the data recorded from the active devices visiting Google Play in a seven-day period ending on October 26. The platform is far behind last year's Android Oreo that reached 21.5 percent of the overall Android market earlier this week. Android Nougat, which was released in 2016, holds a market share of 28.2 percent.

The rationale behind the significantly lesser growth of Android Pie against iOS 12 is the number of smartphones running the latest Android version. While the iPhone XR, iPhone XS, and iPhone XS Max come preloaded with iOS 12, there are just the Pixel 3 and Pixel 3 XL that have Android Pie out-of-the-box. Also, the rate at which Android OEMs push updates is generally quite lower than what Apple manages by quickly delivering fresh experiences to a list of iPhone models.

Apple offers features such as Screen Time and Siri Shortcuts through iOS 12 as well as provides a list of system-level optimisations and improvements. There are also developments such as Animoji to please users on iPhone X and later models. Earlier this week, the company brought iOS 12.1 as the first point update to iOS 12 with Group FaceTime to let users add up to 32 people simultaneously. There are also over 70 emoji characters. Specifically for the iPhone XS, iPhone XS Max, and iPhone XR users, the update has brought dual-SIM support.