iOS 12 Is Now Running on 50 Percent of All Active iOS Devices: Apple

Just days after it was reported that iOS 12 was running on over 47 percent of devices shortly after its formal debut, Apple has now confirmed that as many as 50 percent of active devices are using the latest iOS version. The company has also posted that 53 percent of devices it introduced in the last four years are using iOS 12. The faster growth of the fresh iOS version has sensibly impacted the adoption of iOS 11, which comes as the predecessor of iOS 12 and was released last year, that dropped to 39 percent of all Apple devices and 40 percent of four-year-old and newer devices. Notably, the adoption of iOS 11 reached the 85 percent mark days ahead of the iOS 12 release last month.

As per the new data released on the App Store Distribution page that was measured by the App Store on October 10, 50 percent of active iOS devices and 53 percent of active devices that the company has launched since September 2014 are running iOS 12. It is worth pointing out that the four-year timespan metric is something fresh from the iPhone maker and is mainly aimed to show the popularly of the latest iOS version among all the devices that are available on its compatibility list. In the current case, the company is reflecting the growth in the adoption of iOS 12 by the users of the iPhone 6 and later models. The timeframe could be stretched one year beyond September 2014 as iOS 12 is compatible with the iPhone 5s as well that was launched in 2013. But alongside the iPhone 5s, the company brought the iPhone 5c that doesn't support the newest software build.

With the increase in the installation of iOS 12, the distribution of iOS 11 has been declined to 39 percent of all active iOS devices and 40 percent of the devices introduced in the last four years. The one percent difference between the numbers highlighting the iOS 11 adoption among all Apple devices and devices introduced in the last four years suggests that the optimisations available on iOS 12 convinced several users of the iPhone 5s that was a part of the all devices cadre and was amongst the oldest devices to get the newest iOS experience.

The official data released by Apple also shows that 7 percent of devices introduced in the last four years and 11 percent of all devices are running iOS 10 or earlier. There is a four percent gap between all devices and the devices introduced in the last four years that are running a version prior to iOS 11. This is likely to be due to the fact that the devices aren't supporting newer updates after iOS 10, such as the iPhone 5c and iPhone 5. 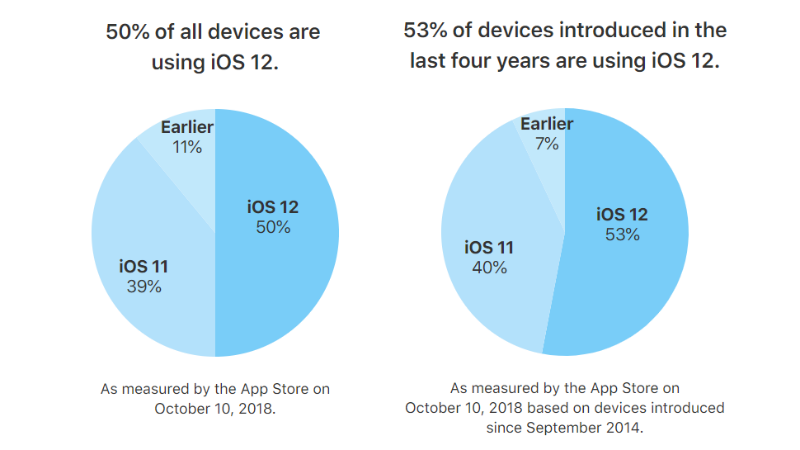 All in all, the official numbers on the App Store Distribution page shows the early success of iOS 12. The new version that has features such as Screen Time and Siri Shortcuts that have attracted a large number of existing Apple device users. Also, there are system-level optimisations and improvements that are persuading iOS users to switch to the latest update.

It is important to mention that unlike iOS 12 that already crossed the milestone of having an install base of 50 percent of all Apple devices, iOS 11 took almost a couple of months in reaching the same success level. Google's Android, on the other hand, is nowhere close to the latest iOS version as its Pie iteration is running on less than 0.1 percent of total Android devices, as per the data collected by Google Play during a 7-day period ending on September 28.

iOS 12 Is Now Running on 50 Percent of All Active iOS Devices: Apple
Comment