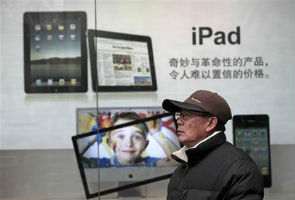 Highlights
A dispute over the name of the iPad may not be the only trademark problem facing Apple Inc in China. At least 39 Chinese companies and individuals have attempted to register the names iPhone or iPad as trademarks for products as varied as hiking shoes, veterinary drugs and diapers, the China Daily newspaper reported.

The newspaper says six manufacturers, including a flashlight manufacturer, got as far as preliminary approval before their applications were challenged.

Cai Zhiyong, whose company is based in east China's Zhejiang province, said he applied to register iPhone as a trademark for his lamps and flashlights in 2010, but was recently asked to provide supporting evidence in the final disclosure stage.

"Apple objected to our application on the last day of the three-month disclosure that began in June 2011," Xu Jie, a lawyer representing Cai's company based in the manufacturing town of Yiwu said.

On Friday, Xu received a letter from the trademark office of the State Administration for Industry and Commerce demanding the applicant provide supporting evidence within a month.

Apple held Cai's firm had infringed upon its trademark and should therefore withdraw the application. "The debate focused on whether iPhone had gained certified status as a 'famous brand' under protection from China's law of trademarks," Xu said.

The law prevents "famous" brand names from being registered under other categories. "Famous as it is today, we cannot assume iPhone was already an officially recognized 'famous brand' back in 2010," Xu said.

He said it took him by surprise when he found, at Cai's request in 2010, that Apple had not registered its trademarks in all of China's 45 commercial categories, a practice other transnational companies follow. "It seemed to me that Apple did not care much about the China market. So the dispute was caused by Apple's brand strategy flaws," he said.

"My big clients, mostly manufacturing firms based in Yiwu, almost always register their trademarks in all product and service categories to protect and nurture their brands." Xu expected the dispute to last two to three years. This is the second legal battle for Apple as already it is facing a similar case related to its iPad as its brand rights are claimed by some local company.

Based on this officials in several provinces began pulling out iPad out of the apple store shelves. Chinese courts will hear an iPad trademark dispute between Apple and the Shenzhen-based Proview later this month. Feng Xiaoqing, an intellectual property rights specialist, told China Daily that flaws existed in the implementation of Apple's brand strategy.

"Many Chinese companies face the same situation overseas as well," he said.
Comments