Battery Health data will not be shown if a user decides to manually replace the battery of a few iPhones. 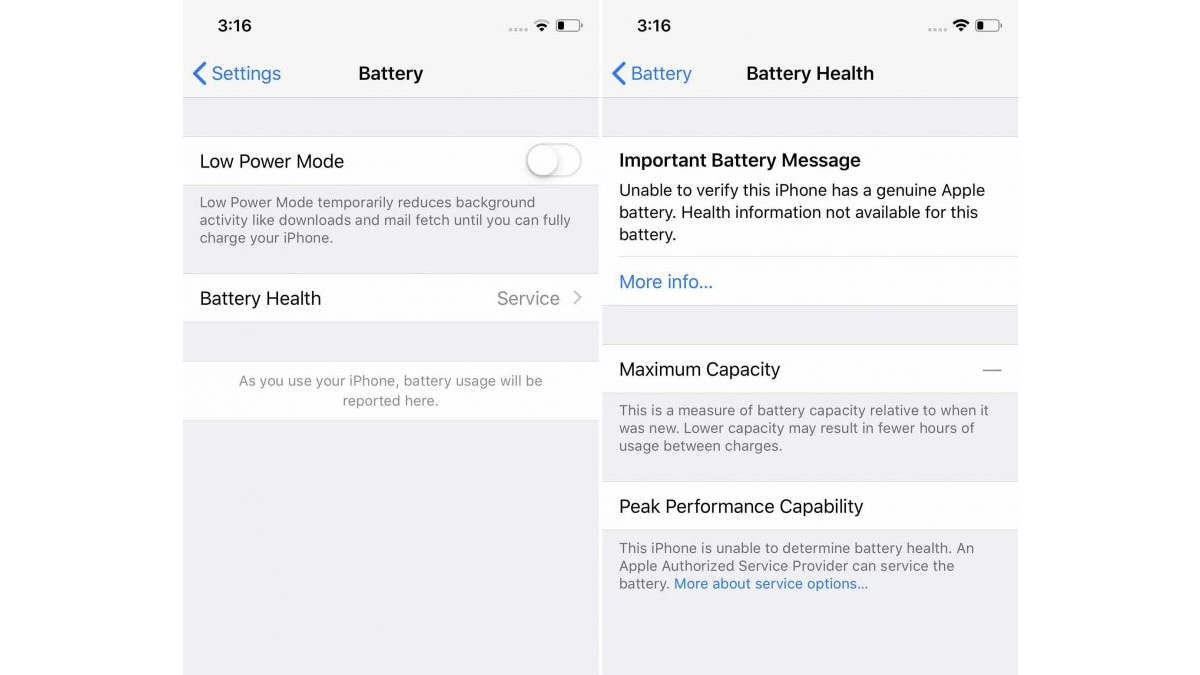 Apple appears to be preventing third-party battery replacement on few iPhone models, meaning users cannot replace the battery without any glitch forcing them to go to Apple authorised service providers only. The tech giant is reportedly locking down batteries with a software switch, and if users decide to replace the battery on their own, or through other means, an error message in battery health shows up, showing a ‘service' message on screen. This new battery lockdown feature is reportedly active on iPhone XR, iPhone XS and iPhone XS Max.

Justin from The Art of Repair YouTube channel was the first to discover this phenomenon. He displayed the issue by replacing an iPhone XR battery with a genuine Apple authorised battery manually. However, even after putting a genuine battery inside, the Battery Health section still displayed the ‘service' error. The Battery Health section also had an important battery message that read, “Unable to verify this iPhone has a genuine Apple battery. Health information not available for this battery.”

This error message pops up as soon as you replace the battery, even if it's a genuine one. You can't make this message disappear unless you get battery replacement done at an Apple Authorised Service Provider or Apple Genius Bar. Essentially, this isn't a bug, and Apple wants this feature so that users are compelled to pay the company for replacing batteries. Justin notes the culprit behind the move is a Texas Instruments microcontroller that also has an authentication feature. iFixit was able to replicate the problem on an iPhone XS running both on iOS 12 and iOS 13. The report says,” Presumably, their internal diagnostic software can flip the magic bit that resets this 'Service' indicator. But Apple refuses to make this software available to anyone but themselves and Apple Authorized Service Providers.”

"The chip used in newer iPhone batteries includes an authentication feature that stores the info for pairing the battery to the iPhone's logic board... Technically, it is possible to remove the microcontroller chip from the original battery and carefully solder it into the new battery you're swapping in, restoring the Battery Health feature—but the procedure isn't for the faint of heart, and it's an unreasonable requirement for any repair, much less something as simple as a battery swap," iFixit notes. While you won't be able to see your battery's health and ascertain a good time to replace it, the replaced battery will continue to work fine, without compromising on the iPhone's performance. The only drawback is that Battery Health won't be accessible.

iFixit notes that most users won't realise that nothing is wrong, "this is a huge problem for iPhone owners who may not know about this new, sneaky lockdown, and it will undoubtedly cause confusion: they'll replace their own battery and notice the 'Service'message, then begin troubleshooting a problem that isn't there." This does make DIY repair difficult for users who are used to it, and battery replacement will require users to go to an Apple Authorised Service Provider and pay a fee. We've reached out to Apple to comment on the move, and will update this space when we hear back.

Huawei Unveils HarmonyOS to Rival Android, Says ‘Can Immediately Switch’ to It if Needed