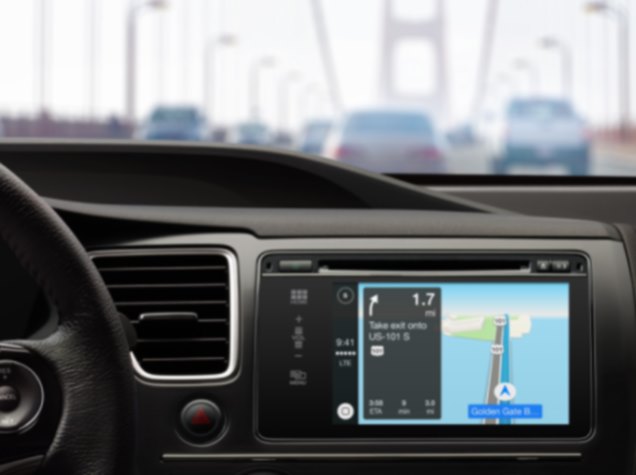 Apple has announced that it will soon deliver an iPhone update which will enable CarPlay, a feature that allows users to plug their phones into compatible vehicles in order to control entertainment, navigation, and call handling features via voice commands and steering-mounted controls.

Users will be able to trigger Siri via a steering-mounted button, allowing them to control phone functions while keeping their eyes on the road. Cars with touchscreens will be able to display a customized iOS-like interface, and physical knobs and buttons in the car will hook into CarPlay as well. Directions can be displayed on-screen using Apple Maps, which will include turn-by-turn prompts, traffic condition notifications, and estimated travel time.

CarPlay will also be able to predict where you need directions to using contextual data that can already be identified in your phone's reminders, email, messages and calendar apps.

Siri can be used to dial numbers, answer or reject calls, read messages, take dictation, trigger music and podcast playback, and launching apps. Third-party apps will also be supported, and popular entertainment apps such as Beats Radio, iHeartRadio, Spotify and Stitcher will be functional at launchtime.

It is not known whether any app developer can choose to hook into CarPlay, or whether competing services such as Google Maps will be available. Apple has not yet disclosed exactly what a vehicle needs in order to be CarPlay compatible. Not all CarPlay implementations will use a touchscreen, but there is no indication yet of what kind of control buttons or layout will be mandatory across manufacturers. The feature will require an iPhone with Lightning dock connector, which is limited to the iPhone 5, 5s and 5c.

CarPlay, formerly known as iOS in the Car, was demonstrated to developers at Apple's World-Wide Developer Conference last year. The first cars that support CarPlay are expected to debut at the Geneva Motor Show this week. Ferrari, Honda, Hyundai, Jaguar, Mercedes-Benz and Volvo are already on board and will include CarPlay in new models launched this year.

CarPlay is expected to be a headlining feature of iOS 7.1, which will be delivered as an update to users in mid-March and also include a few visual tweaks, minor features and bug fixes.