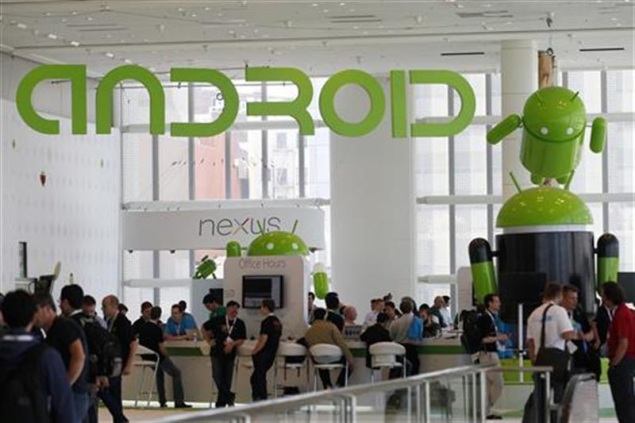 Android's share of the smartphone market grew to 79.3 percent in the second quarter while that of iPhone slipped to 13.2 percent from 16.6 percent in the same three-month period last year, according to IDC figures.

"The iOS decline in the second quarter aligns with the cyclicality of iPhone," said IDC mobile phone research team manager Ramon Llamas, referring to the software platform on which the Apple handsets are built.

"Without a new product launch since the debut of the iPhone 5 nearly a year ago, Apple's market share was vulnerable to product launches from the competition."

Apple is "well positioned" to recapture market share with the release later this year of a new iPhone and the next-generation iOS mobile operating system, according to Llamas.

IDC reported that 187 million Android-powered smartphones were shipped in the second quarter of the year as compared to 31.2 million iPhones.

Smartphones powered by Microsoft Windows software showed the biggest jump, hitting 3.7-percent of the market in a 77.6 percent rise that "re-enforced" the mobile platform's third-place position, according to IDC.

The gain was driven by Nokia, which released hot new Windows smartphones and accounted for just shy of 82 percent of the 8.7 million Windows phones shipped worldwide during the quarter.

"Nokia has clearly been the driving force behind the Windows Phone platform, and we expect that to continue."

Ailing Blackberry saw its share of the global smartphone market shrink to 2.9 percent from 4.9 percent in the second quarter last year, IDC reported.

A total of 236.4 million smartphones were shipped during the quarter in a 51.3 percent rise from the 156.2 million shipped in the same period a year earlier, according to IDC.

Android retained its crown as the top smartphone platform in the United States in the quarter with 59 percent of the market, the same as the prior quarter, a report released Tuesday by comScore indicated.

California-based Apple remained the most popular smartphone maker in US and its share of that market was up slightly to 39.9 percent from the first three months of this year, according to comScore.

NSN becomes Nokia Solutions and Networks as Nokia completes buy out of Siemens' stake
Rise of the smartphones: Monasteries decline as TV and mobiles grip Bhutan