Android Q Beta 2 patch is compatible with all Pixel phones

Android Q Beta 2 has received a patch just a week after it reached Pixel devices. The latest patch doesn't bring any noticeable change, though Google says that it includes a "small number of bug fixes" and prevents apps from crashing on startup. The Android Q Beta 2 release debuted last week brought features such as 'Bubbles' and iOS-like gesture navigation. These features haven't received any major changes through the new patch. Also, Google has fixed the issue that was resetting the permissions of installed apps.

According to the updated release notes on the Android Developers portal, the Android Q Beta 2 patch brings some "bug fixes for developers and early adopters", and it is suitable for development, testing, and general use. The patch includes a couple of "top resolved issues" relating to apps crashing on startup and the permission behaviour of the system.

Google mentions that because of conflicts with execute-only memory apps were crashing on startup that should now perform normally. "We've modified the associated Android Q behaviour change so that it now applies only to apps targeting Android Q or higher, rather than to apps targeting API 26 or higher."

Similarly, it was noticed that permissions of apps were resetting after they're reinstalled or the device was reboot. The Android team found that the problem was emerging due to an app ops issue that has also been fixed through the patch.

That being said, the latest patch still comes with a caution pertaining to "significant behaviour changes" that affect apps and normal functioning of your device. 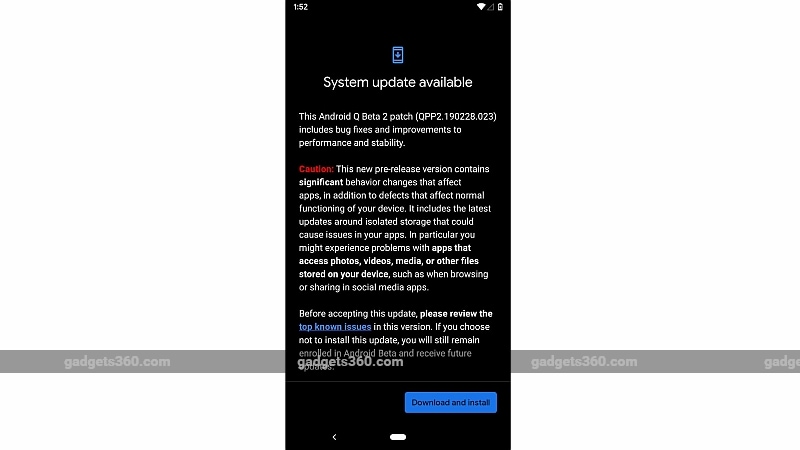 Notably, the new patch retains the April 2019 Android security update. Likewise, it still has the version 16.0.88 of Google Play services that debuted with Android Q Beta 2.

Users who are already a part of the Android Beta Program can download the new build by going to Settings > System > Advanced > System update. Alternatively, Google has provided factory images and OTA files to manually download and install the new package.

Notably, since Android Q Beta is so far exclusive to Pixel phones, you can download the new patch on your Pixel, Pixel XL, Pixel 2, Pixel 2 XL, Pixel 3, or Pixel 3 XL only.