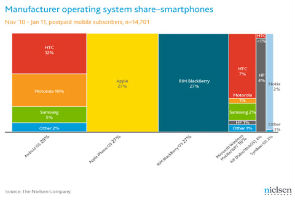 Highlights
The smartphone race is still raging, but who is winning might look different depending which question you ask.Is Google's Android platform beating Apple's iOS? Yes and no.

A new report released Thursday by Nielsen, a market research firm, found that Android had become the most popular operating system among United States smartphone users. The report said Android now accounted for 29 per cent of all active smartphones. In comparison, the R.I.M. BlackBerry platform and Apple's iOS each account for 27 per cent of active smartphones.

The numbers used in the study were collected from November 2010 through January 2011; this does not account for the Apple iPhone being available on the Verizon cellular network.

Nielsen also found that R.I.M. and Apple were leading the pack when it came to manufacturing the hardware that operated these smartphones. Apple and R.I.M. do have an advantage, though; "they are the only ones creating and selling smartphones with their respective operating systems." Windows Phone 7 and the Google Android platform rely on third-party companies, including Samsung, HTC and Hewlett-Packard, to build phones for their respective operating systems.

The Nielsen study also dissected the age group of people who use smartphones in the United States, noting that people aged 18 to 24 years old were more prone to adopt the Google Android platform. Those aged 25 to 34 years seem to be evenly split when deciding which smartphones to buy, opting for Android, iOS and BlackBerry on an equal basis.