Android Pie Yet to Open Account on Android Distribution Chart, Nougat Continues Its Domination in September

Android 9.0 Pie is so far publicly available only for Pixel devices and Essential Phone

Android 9.0 Pie, the latest Android iteration that was released last month, is yet to become a part of the Android distribution dashboard. Google on Thursday posted new Android distribution numbers that suggest a stagnant growth of the software version that is so far available publicly for the Pixel devices and Essential Phone. Notably, the latest numbers aren't showing any major differences from the statistics collected at the end of August.

Android Oreo, which comes as the predecessor of Android Pie and comprises version 8.0 and 8.1, has retained the market share of 14.6 percent of the Android market in September, similar to its share last month. However, Android Nougat with version 7.0 and 7.1 has continued its domination with a 30.8 percent share.

According to the official Android distribution numbers, collected in a 7-day period that ended on September 12, Android 9.0 Pie is continued to have a less than 0.1 percent share. Companies such as OnePlus, HMD Global, and Xiaomi are set to bring Android Pie to their existing devices. This hints at some growth in the market share of the latest Android in the coming months.

While Android Pie is yet to open its account in the official distribution chart, the September statistics show that there is consistency in the growth of other Android versions. Android Nougat, a combination of Android 7.0 and 7.1, has captured 30.8 percent share in September. Android Oreo with version 8.0 and 8.1, on the other hand, has captured a 14.6 percent share. 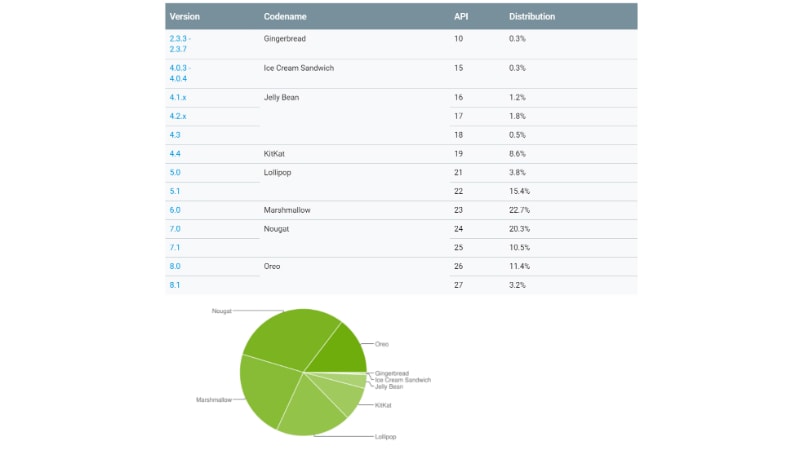 These figures are identical to what was reported for the 7-day period ending August 31. Android Gingerbread and Ice Cream Sandwich come as the least active versions on the distribution chart with both having 0.3 percent market share in September. Furthermore, Android Marshmallow has managed to reach 22.7 percent, while KitKat is stood at 8.6 percent and Jelly Bean at 3.5 percent. Alongside the updated Android distribution numbers, Google has revealed the fresh statistics for OpenGL adoption. While the latest OpenGL 3.2 managed to lead at 32.4 percent, OpenGL 3.1 stood at 13.7 percent, OpenGL 3.0 at 31 percent, and OpenGL 2.0 at 22.9 percent.

Further reading: Android Pie, Android, Google, Android Distribution
Jagmeet Singh Email Jagmeet
Jagmeet Singh writes about consumer technology for Gadgets 360, out of New Delhi. Jagmeet is a senior reporter for Gadgets 360, and has frequently written about apps, computer security, Internet services, and telecom developments. Jagmeet is available on Twitter at @JagmeetS13 or Email at jagmeets@ndtv.com. Please send in your leads and tips. More
Pixel 3 Range Teased on Google Store Ahead of October 9 Launch
Spotify Attracts Eyes as Well as Ears With Video Ads