The latest distribution numbers confirm that Android 7.0 is now present on 2.4 percent and Android 7.1 on 0.4 percent devices. Sharing the latest distribution data of different versions of Android, Google reported that Marshmallow has a total share of 31.3 percent of Android devices that check into Google Play, compared to the 30.7 percent reported in November - an increase of 0.6 percent. Unlike previous Android distribution numbers, Android 6.0 Marshmallow is not the most used Android version in March, and has been replaced by Android Lollipop. 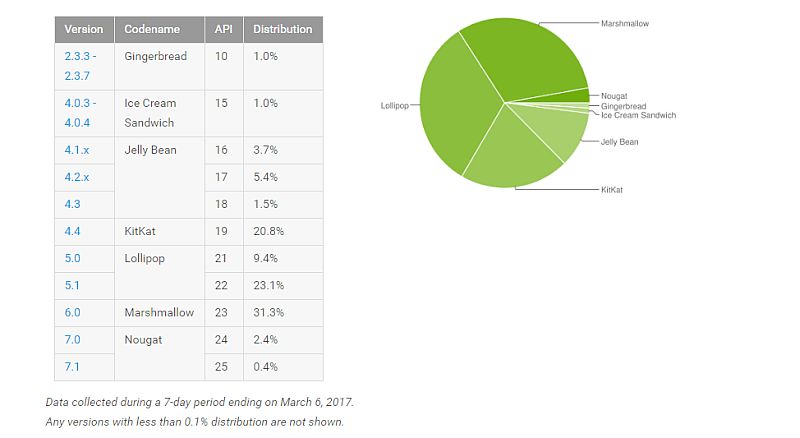 Other Android versions listed in the latest distribution data include Android Jelly Bean which has a combined share of 10.6 percent while Android 4.0.x or Ice Cream Sandwich and Android Gingerbread (v2.3.3-2.3.7), in Google's latest numbers, registered a share of 1 percent each. To note, the figures are gathered from devices visiting the Google Play app, which only supports Android 2.2 and above.

The latest OpenGL version distribution numbers, on the other hand, saw OpenGL 2.0 at 39.5 percent, and OpenGL version 3.0 steadily rising to 42.3 percent.