We were able to spot the feature on both Android 8.1 Oreo and Android 9.0 Pie handsets

Google is rolling out the ability to initiate manual backups to Google Drive - that does not need the usually recommended Wi-Fi - on Android devices including older ones. There doesn't appear to be a specified limit for the Android version that is receiving the feature. We were able to spot the feature on both Android 8.1 Oreo and Android 9.0 Pie handsets.

Previously, for backups, a smartphone had to be connected to a Wi-Fi network and the device would have to in the charging mode. Because of this, if a handset lost its ability to charge or could not connect to the Wi-Fi, users were unable to back their data up on Google Drive.

To access the feature, users will need to visit Settings > Backup & reset > Google account. There, they will see the new Back up now option if they have the Back up to Google Drive option enabled – something that's enabled by default. On the same page, users will also be able to see which data categories are part of Active backups – we had app data, call history, contacts, device settings, and photos & videos. 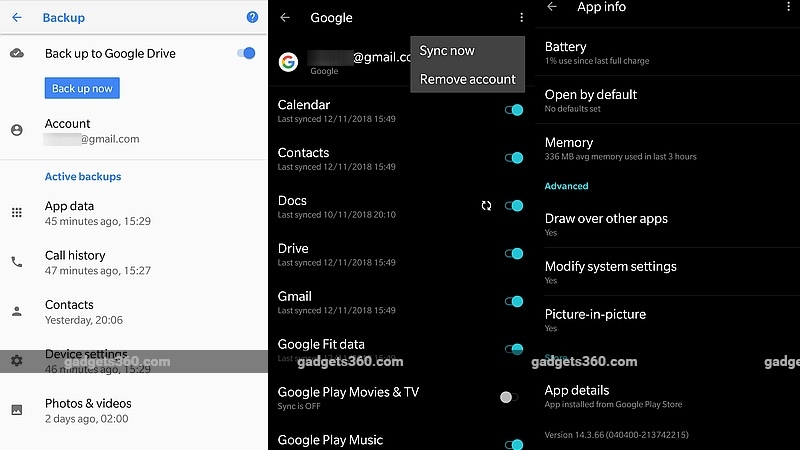 Notably, a ‘sync now' option is available for other data categories under the Accounts section – this is available via Settings > Accounts > Google. Here, users will see Calendar, Contacts, Docs, Drive, Gmail, Google Fit data, Google Play Movies & TV, Google Play Music, People details, and Play Games Cloud Save. As you can see, there is some overlap between the two features.

The rollout of the ‘manual backup to Google Drive' feature was first spotted by a Twitter user named Alex Kruger, who pointed out to 9to5Google that it's visible on older devices such as the Droid Turbo from 2014 that is running Android Marshmallow.

To recall, the ‘manual backup' feature was first mentioned back in August this year via a Google Issue Tracker request, at which point the Google Android developer said it will be implemented in a future release of Android. Right now, it appears that Google has rolled out the feature via a Google Play services update. As we mentioned, we're seeing the feature on our devices, and are running v14.3.66 – v14.3.67.

The 9to5Google report also notes that the capability of manually backing up your Android device was always there, but required using the command prompt in Android's ADB tool – not something most users are comfortable with.