Android devices targeted by 99 percent of all mobile malware in 2013: Cisco 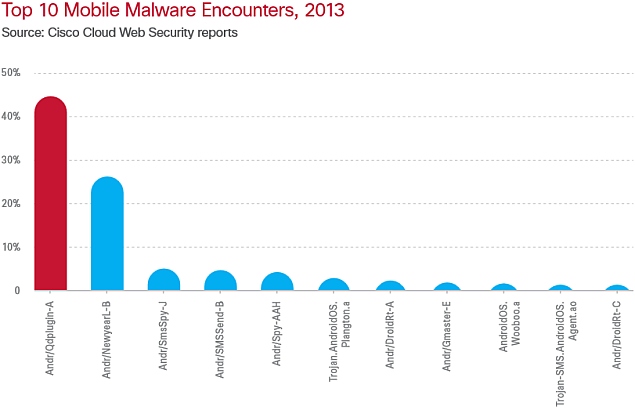 It is not surprising, given the rate at which the Android market has grown in the recent past, that the platform would be targeted by malware attacks. What is important to note, however, is the rate at which they are susceptible to the problem. According to a report released by Cisco, recently, 99 out of every 100 mobile devices which have fallen prey to mobile malware are Android devices.

The Cisco 2014 Annual Security Report also details that the Android platform has a target of 71 percent of Web-delivered malware. This might sound appalling and worrisome for users but the report also details that only about 1.2 percent of the Web-attacks are target-specific. The rest of the attacks use a wider-reach system that involves redirecting users on to other websites and phishing sites, which target the personal accounts of people.

The report from Cisco also highlights what it calls the most highly found malware on Android devices - Andr/Qdplugin-A. It is introduced to devices in the form of a legal app, which is not found on the Google Play store but on other unofficial app stores. Cisco says that users who stick to buying and downloading apps from the Google Play store are less likely to be hit by such attacks and even advises users to do the same.

Apple devices on the other hand have had a much better faring giving that users stick to downloading apps from the official iTunes store. Interestingly, the Cisco report was brought further to global attention with a tweet by Phil Schiller, who just happens to be Senior Vice-President of Apple's Worldwide Marketing division.

Apart from the mobile malware findings, the Cisco 2014 Annual Security Report detailed other findings, such as Web exploits (91 percent of which were targeted at the Java platform), and types of malware (64 percent are Trojans, 20 percent are adware). You can see the complete report here.