Now, fresh developments have come out suggesting that Android 5.1 Lollipop might also be ready for Google Nexus devices and purported live images of the Indonesian Android One smartphones already running the Android version detail some of changes in the new build ahead of an official changelog from Google.

On Wednesday, Google revealed its plans in a blog post to launch Android One smartphones in Indonesia. In the meanwhile, on its dedicated Android One site for the country, Google noted the smartphones will run Android 5.1 Lollipop - however, the company has not yet responded with further details. With the launch, Indonesia will become the fifth country after India, Bangladesh, Nepal and Sri Lanka to receive Android One smartphones. While Google is yet to announce a release date for the new devices, it's VP Product Management, Caesar Sengupta said, "In Indonesia, we're working with leading partners Evercoss, Mito and Nexian to make high-quality smartphones for less than IDR 1.5 million (approximately Rs. 7,330)."

Shortly after the announcement, Android Police published purported images and screenshots of two of the Android One smartphones to be launched in Indonesia, made by Evercross and Nexian. The images have tipped one change that we should expect in the updated Android 5.1 Lollipop build. To remind you, the build hasn't been officially previewed or detailed by Google as yet.

As seen in the screenshots obtained by Android Police, Google has tweaked the quick settings toggles for Wi-Fi and Bluetooth. In Android 5.0 Lollipop, apart from toggling on/ off Wi-Fi and Bluetooth icon with a simple tap, users are required to tap below to access full switch menu of both. But in Android 5.1 Lollipop Google appears has tweaked this a little, and now users will reportedly see a down arrow sign which on tapping opens up a list without leaving the quick settings. 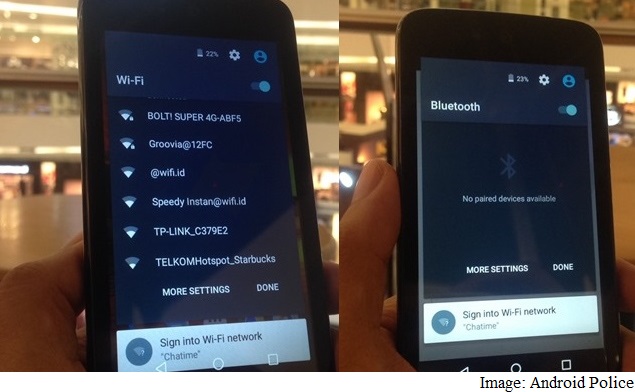