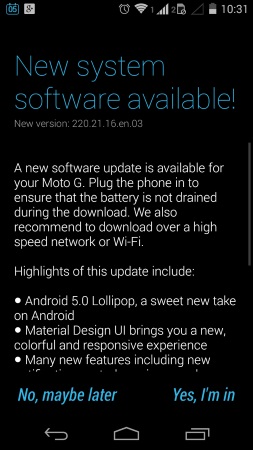 The Moto G (Gen 1) users will either receive a notification for the OTA update to Android 5.0 Lollipop, or they can also check manually for the update by visiting Settings>About phone>System updates. With either method, users will have to then select 'Yes, I'm in', to authorise the download of the update, and then click 'Install now'.

An XDA Developers' forum member also posted a screenshot of the Android 5.0 Lollipop update for the Moto G (Gen 1), showing the build number and changelog.

Notably, the company has also posted the changelog for the update on 'Release Notes' support page and it includes the new Material Design UI with fluid animations to new application and system themes, colours and widgets, as well as the new notifications UI that will now appear on the lock screen. Other new features part of the Android 5.0 Lollipop update for the first generation Moto G include Smart Lock; new interruptions and downtime settings that will offer the option to tailor how interruptions behave; redesigned multitasking; Ambient Display now showing notifications without turning on the full display; revamped Motorola Assist, and the new flashlight option as part of Quick settings in Lollipop.

The Lenovo-owned company had last week updated its 'Motorola Update Services' app in Google Play ahead of an impending Android 5.0 Lollipop update for the first-generation Moto G. Users last week were also reporting that Motorola had started the Android 5.0 Lollipop 'soak test' in India with members of the Moto Feedback Network.