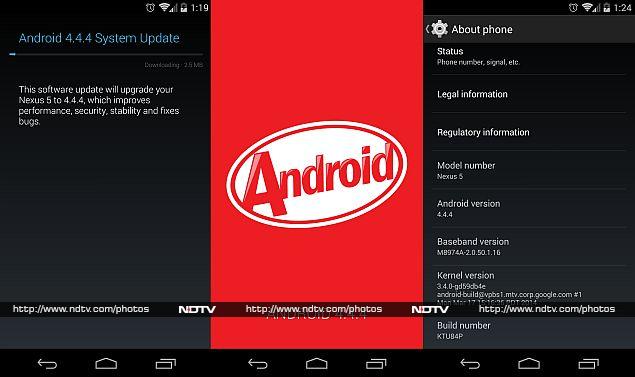 To recall, the Android 4.4.4 KitKat update majorly fixes security issues, specifically related to an OpenSSL bug. "The software update will upgrade your Nexus 5 to 4.4.4, which improves performance, security, stability and fixes bugs," states the update page for Nexus 5 handset.

Sized at a minimal 2.5MB for Nexus 5 (Review | Pictures), Google's Android 4.4.4 KitKat is an incremental update from Android 4.4.3 KitKat and brings the update version KTU84P. Few changes to Chromium Web browser and WebView have been also made. A detailed changelog can be seen listed by Funky Android. Other than existing bug fixes, the Android 4.4.4 KitKat update does not bring anything significantly new in terms of features and UI interface.

Last week, when Google posted Android 4.4.4 factory images for Nexus devices online, it was reported that the update would start rolling out to Nexus 5 and might gradually become available across other regions soon. Further, Google Play Edition devices can also be expected to receive the Android 4.4.4 update soon.