And now, bendable screens on smartphones 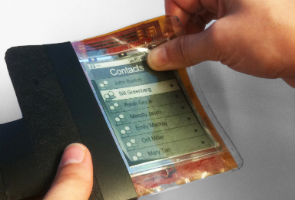 Highlights
The smartphone is evolving at a furious pace. After buttons, touch screens and tablets, the bendable screen is the newest prototype. How it works - just bend the screen in different directions to get it to do what you want.

Says creator Roel Vertegaal, Director, Queen's University Human Media Lab, "This is the future. Everything is going to look and feel like this within five years. This computer looks, feels and operates like a small sheet of interactive paper. You interact with it by bending it into a cell phone, flipping the corner to turn pages, or writing on it with a pen."

The prototype is called a paperphone and can perform all the actions your smartphone can - store books, play music and make phone calls.

The display of the paperphone consists of a 9.5cm diagonal thin film flexible e-ink display. The flexible form of the display makes it more portable than existing smartphones.

A bendable screen prevents the screen from breaking if dropped, and ensures economy of space as the phone can be folded for storage when not in use.

In the recent past, there have been prototypes of bendable phones from Sony, LG and Philips but none of them have featured a bendable screen as the user interface.

Enjoy a demo of the paperphone below.