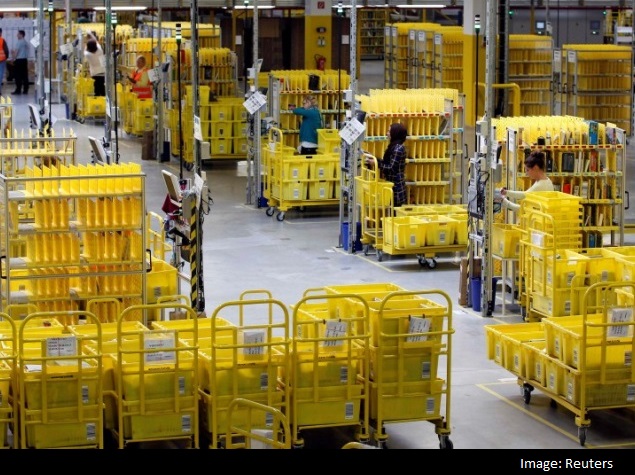 Hold the phone: Amazon wants to burrow even deeper into your life.

The retailer is expected to introduce a smartphone Wednesday at an event in Seattle, a long-rumored project that aims to close any remaining gap between the impulse to buy and the completed act.

Amazon has spent the last several years furiously investing billions of dollars on multiple fronts: constructing warehouses all over the country to deliver goods as fast as possible; building devices as varied as tablets and set-top boxes; and creating and licensing entertainment to stock those devices.

It all adds up to a wildly ambitious venture without precedent in modern merchandising. Wall Street has generally cheered as competitors - an ever-growing group that now includes businesses including Wal-Mart, eBay, Apple and Google - regard these activities with increasing unease. Customers, meanwhile, are propelling Amazon toward the rarefied ranks of companies with revenue of $100 billion.

The phone is the last and most crucial link in this colossal enterprise. It is a singular gamble for a company that, for all its technology components, is still primarily a merchant. Because even the smartest tech companies have trouble with phones.

A Google smartphone, the Nexus One, failed to catch on. Google next bought Motorola and then dumped it. Blackberry, once the dominant smartphone maker, is struggling to survive. Microsoft's Windows Phone has less than 3 percent of the global market. A Facebook phone last year stumbled.

When it comes to smartphone profits, Apple and Samsung divide them up, leaving crumbs for every other manufacturer. At least in the United States, phones are a mature market, with 120 million sold last year.

Now Amazon is giving this brutal business a shot. On the one hand, analysts say, it has no choice. On the other, the rewards could be tremendous.

"Mobile is asserting not just its utility but its supremacy," said James McQuivey, an analyst with Forrester Research. "If you're Amazon, you're worried you're going to be cut out of the next big interface. So you jump in and make yourself relevant, whether your customer is in the bathroom, the kitchen or the car. You go for broke."

For Amazon, the risk of doing nothing is to be completely marginalized by one of its competitors. McQuivey offered the example of coconut flour.

Search for the flour on Google, and Amazon comes up in two of the top responses, one of them an ad it paid for. In the future as designed by Google, however, the search engine will remember what you're looking for when you're out in the world and sell ads against that. So the next time you drive past Trader Joe's, your Android phone sends a note: There is coconut flour just 50 feet away.

If that sort of transaction starts happening too often, the coconut flour is going to go stale in Amazon's warehouses.

In building a phone, Amazon has advantages other phone makers did not. It can sell to its 250 million customers without a middleman. It can bundle features with the Amazon Prime membership club, as it just did last week with a new streaming music service.

Most of all, Amazon has the blessing of Wall Street to lose money as long as it is gaining market share - although recently the enthusiasm has dimmed a bit. The stock is about 20 percent off its peak.

An early demonstration of what Amazon wants to do with shopping can be seen in the Dash, a wand that the company quietly introduced this year. Customers who belong to Amazon's grocery service can use the Dash, which scans bar codes or takes voice commands, to restock their refrigerator and cabinets.

Imagine the Dash set free on the world, and you have Amazon's long-term hopes for a phone. Sam Hall, an Amazon mobile executive, succinctly set forth the agenda in an interview a few years ago: "We're trying to remove the barrier between 'I want that' and 'I have it.'"

An Amazon spokesman declined to comment on Wednesday's event. There is always the possibility, of course, that all the rumors about a phone could be an elaborate head fake, and that the event will be something else entirely - perhaps a kiss-and-make-up ceremony between Amazon and its suppliers, with several of which it has drawn swords.

No matter what, the event has more hoopla than any Amazon release within memory, indicating something big. First came a video showing a lot of people oohing and ahhing over something conveniently out of camera range. This was taken by some as confirmation that the phone will have some sort of 3-D capacity. That might pull in gamers, another audience Amazon is cultivating.

Reporters and the public were invited to apply to attend the event, and so were developers who had worked on apps using a phone's motion sensors. The developers were also asked if they had experience with "machine learning," which could mean Amazon is trying to design the phone so it can serve contextual information based on behavior.

For instance, say you bought a new camera on Amazon, searched for hotels in Florence, Italy and downloaded a timetable for Italian trains; the company could ask you, would you like to buy this passport holder? Special price, today only.

A phone could also be an opportunity for Amazon to re-energize its business with digital media. North American media revenue in the first quarter was up 12 percent from 2013 - hardly growth at all from Amazon's point of view. But Amazon popularized electronic reading with the Kindle in 2007 and then extended it with the Kindle Fire tablets in 2011. Now comes the next step.

"If consumers adopt Amazon's phones - and that's a big 'if,' considering they love their iPhones and love their Android devices - it can then consolidate e-readers into smartphones, just like cameras and music players have been consolidated," said Rebecca Lieb, an analyst with the Altimeter Group. "The Kindle is going to be front and center on this device."

Amazon at the moment is publicly fighting with several media suppliers, including Hachette and Warner Home Video in the United States and Bonnier in Germany. It wants better terms, as it nearly always does, and the media companies are resisting.

"If the phone takes off, there could conceivably be more battles with suppliers, who will have to balance their fear of Amazon with their desire to sell more product," Lieb said. "It's going to be interesting."

Ironically, for all the criticism that Amazon's book business has generated recently, the company kicked off its event with an old-fashioned - in all senses of the word - book. On Friday, attendees received in the mail a 1965 children's tale, "Mr. Pine's Purple House."

It's about a man who wants to distinguish his house from all the other houses on the street, so he paints it purple. Accompanying the book was a note from Jeff Bezos, Amazon's chief executive, saying that this was his favorite childhood book.

"I think you'll agree that the world is a better place when things are a little bit different," Bezos wrote.

Even those who do not agree will have to concede that Amazon is bending all of its considerable energy to break up the usual way of doing things.