In the leaked images, the alleged Redmi 1S successor is seen in White colour and sporting a similar design to its older sibling. The front of the yet-to-be-announced handset is almost identical to the Redmi 1S except that the icons for capacitive buttons below the screen have been changed. 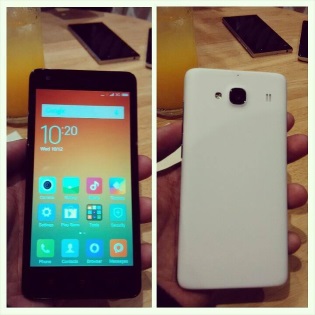 The Redmi 2S seems to sport a slightly taller build than the Redmi 1S in a side by side comparison. The rear of the new Redmi device seems similar; though the flash has been shifted and appears on the right side of the primary camera.

The images have been obtained by the folks at Xiaomigeek and were first reported by Gadgetraid.

Based on earlier leaks, the Xiaomi Redmi 1S successor will feature a 4.7-inch HD display and run on Android 4.4.4 KitKat. It is said to be powered by a 1.2GHz quad-core Cortex-A53 LTE-enabled 64-bit Qualcomm Snapdragon 410 processor with Adreno 306 GPU, and features 1GB of RAM. Also, the rumoured Redmi 2S includes an 8-megapixel rear and 2-megapixel front-facing camera. It is said to measure 134x67.21x9.2mm and weigh 132 grams, which is 26 grams less than the existing Redmi 1S.

Notably, some of the media reports emerging from China also claim that the device being spotted is just a variant of the Redmi 1S featuring dual LTE connectivity and not the successor of the Redmi 1S. Android Headline points that the Redmi 1S LTE variant might launch in collaboration with Tencent.

However, cementing the fact that the handset expected to launch on January 4 is indeed the successor to the popular budget smartphone, is that while most of the specifications of the listed Xiaomi smartphone match the Redmi 1S specifications, the smartphone appears to have a better processor, a better front camera from 1.6-megapixel, latest Android OS, and 4G LTE connectivity - differences significant enough to warrant a refresh.

The handset was also spotted in a Tenaa listing that revealed additional details of the unannounced handset, such as 8GB of inbuilt storage expandable via microSD card (up to 32GB) and a 2200mAh battery. The dual-SIM phone is also listed to feature 4G LTE support on both SIM cards.