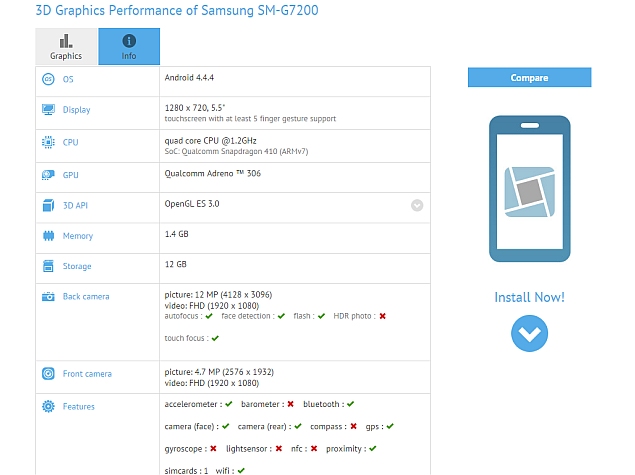 Samsung, after launching its Galaxy A3 and Galaxy A5 handsets in China last month, might soon introduce the successor to its Galaxy Grand 2, the Galaxy Grand 3, if GFXBenchmark results for an SM-G7200 smartphone are any indication.

The Samsung Galaxy Grand 3 appears to be a clear upgrade over the Galaxy Grand 2, especially with regards to the camera. The handset as listed on GFXBenchmark results as the SM-G7200 (first spotted by Gizmobic), and features a 12-megapixel autofocus rear camera and a 4.7-megapixel front-facing camera. Both are capable of recording full-HD videos.

Notably, Samsung made its Galaxy Grand 2 available in India for a price tag of Rs. 22,999 in January. The firm is also yet to launch its metal-clad Galaxy A7 handset, which has been rumoured from quite some time now.