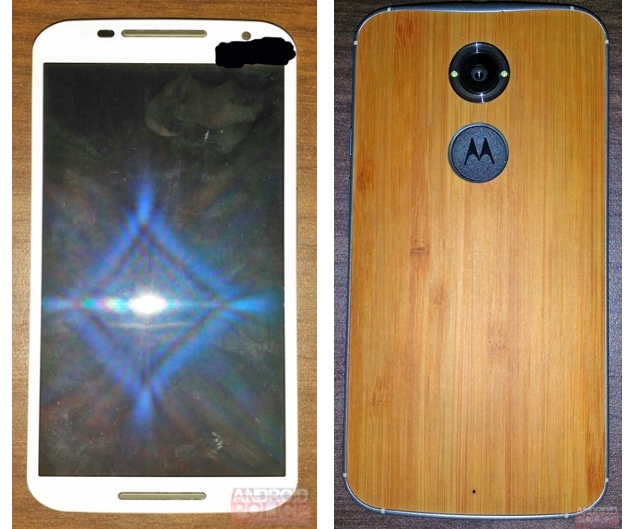 The much-anticipated successor of the Moto X, expected to be called the Moto X+1, has been the subject of numerous leaks for a while now, and the latest piece to hit the Internet are some purported images of the device, as well as a few accompanying specifications.

The leaked images are claimed to be of a "near-final prototype" of the anticipated Moto X+1, and show a device with a similar design to the Moto X (Review | Pictures). The device features wood-finished back panel, with a camera in the centre above a Motorola logo. Previously, serial tipster @evleaks had suggested 25 colour options for the Moto X+1 in five categories - Cool, Neutral, Warm, Wood and Leather.

The latest leak (via Android Police) also tips the display seen in the alleged Moto X+1 images is 5.1-inches large. The front also has a speaker grill at the bottom of the display, like the Moto E (Review | Pictures). The Moto X+1's display was earlier tipped to be a full-HD (1080x1920 pixels) one.

The alleged Moto X+1 seen in the images features metallic side panels, claimed to made of aluminium by the tipster. The device in the images features a 3.5mm audio jack on top, along with the power and volume controls on the right panel, consistent with Motorola's current series of smartphones. Also seen, is that the SIM card slot has been shifted to the top, alongside the audio jack.

While previous leaked images had indicated the Moto X+1 might not come with a rear flash, the latest leak shows two small circular dots on the mounting surrounding the camera lens, claimed to be dual-LED flash.