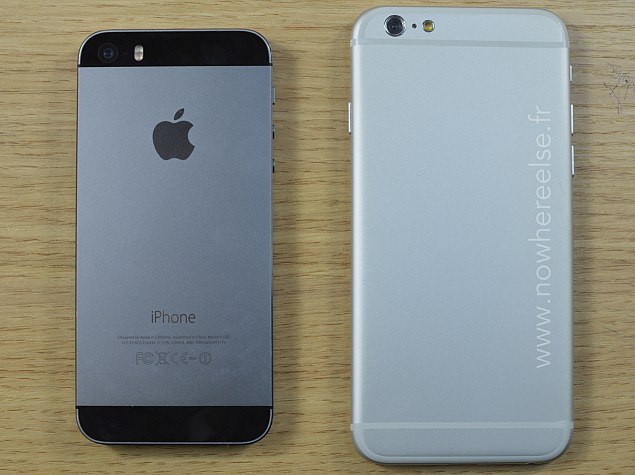 Apple's much-anticipated next iPhone, expected to be called the iPhone 6, has been speculated about and leaked in images several times over the past few months. Most recent leaks point to two screen-size variants of the smartphone, with a metal-based body design that features a shape and design similar to the current generation iPod touch, with a sleek profile and bold curved edges.

In the video, both the alleged iPhone dummy and current-gen iPod touch look similar when it comes to back panels. The only difference one can make out is the camera position, which is placed on top right side on the Apple iPod touch, and on top left side on the iPhone 6. Even the side buttons, which are now seen to be ellipsoidal instead of circular, resemble those on the iPod touch. The radical design, seen in the recently leaked image of the alleged iPhone 6 dummy, also highlights the metal chassis of the smartphone along with a gold-ring home button.

In the other leaked video comparison of the alleged iPhone 6 dummy, this time with the iPhone 5s, a very similar slim-looking device was seen. What also seems to a similar comparison in images was leaked courtesy Nowhereelse.fr.

Another rumour that is yet to be confirmed by the Cupertino firm is the two screen-size variants of the iPhone 6, with reports from last week indicate Apple might roll out the 4.7-inch screen version of the new model in August, a month early, as recent sales have been affected by the launch of bigger-screen phones from rivals such as South Korean-giant Samsung and the Taiwanese HTC. A high-end variant of the iPhone 6 with a 5.5 or 5.6-inch screen might be unveiled in September.

Besides the two rumoured screen sizes for iPhone 6, it was reported last week that the cost of sapphire as a display material had pushed back the alleged 5.5-inch iPhone 6 production back.

Earlier reports also suggested that GT Advanced Technologies received sapphire crystal display tool components from Apple, which were said to be enough to manufacture between 100 and 200 million 5-inch iPhone displays in Arizona.

While the high-end 5.5-inch iPhone model was previously reported to boast of a higher screen resolution at 1080x1920 pixels (full-HD), with a pixel density of 401ppi, the 4.7-inch model is said to pack a lower resolution screen at 750x1334 pixels and might offer a pixel density of 326ppi.

However, all these leaks should be taken with a pinch of salt as Apple has not mentioned anything about the upcoming device.