According to Phonearena, who received the alleged HTC One mini 2 image from an anonymous source, the image was clicked in public transport where a tester was using the device. The image shows the back of the device in hand with a combination of yellow colour accents for the strips and all-aluminium grey colour design body of the alleged One mini 2.

Last week famous tipster @evleaks in a tweet suggested the phone may release as the HTC One mini 2 instead of HTC One (M8) mini.

Earlier Phonearena also put up an alleged press render image claiming the Duo Camera setup will not be seen on the mini variant. Not just this, the smartphone was said not come with a rear-facing UltraPixel camera and the company will pack in a 13-megapixel shooter instead.

The device has also been leaked in another press render image by @evleaks showcasing its different colours - grey, silver and gold.

The rumoured HTC One mini 2 is expected to run Android 4.4.2 with HTC's latest Sense 6.0 UI. It will be powered by a quad-core Snapdragon 400 processor clocked at 1.7GHz and coupled with 1GB of RAM, leaks have suggested. HTC One mini 2 is also rumoured to feature a 4.5-inch display with a resolution of 720x1280 pixels. It will sport a 13-megapixel rear camera and a 5-megapixel front facing camera, as seen on the HTC One (M8). The internal storage will be 16GB with the option to expand via a microSD card. 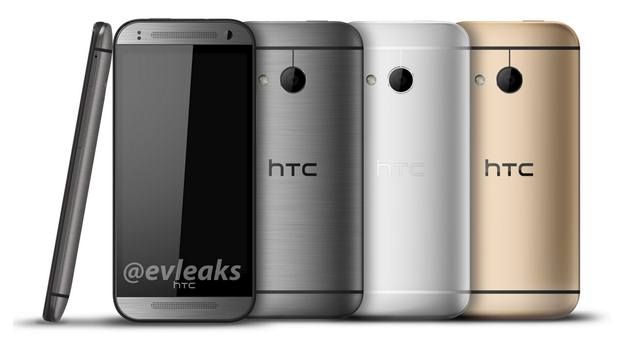