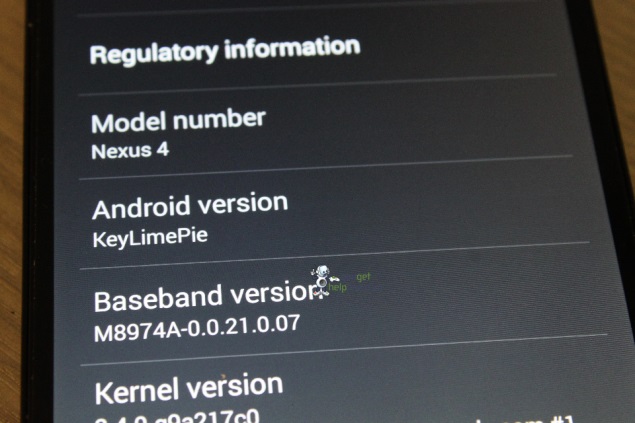 The supposed Android 4.4 Kitkat screenshots have been published by Gadget Helpline, which has also posted hands-on of the Android 4.4 OS. However, the site clearly reveals that the OS was an unfinished version of Android 4.4 KitKat. It's worth pointing out that the site spotted 'Key Lime Pie' running on the device, even when repeatedly checking the Android OS version in the About section of Settings. 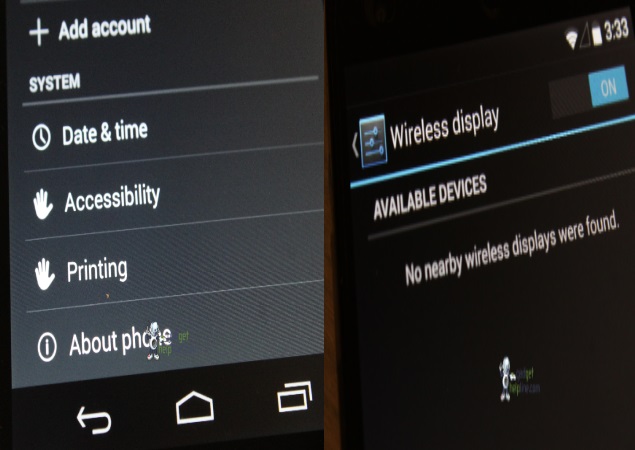 Visible in the alleged Android 4.4 KitKat screenshots, and according to the site, one of the major additions to the OS is a payment feature, which will reportedly bring wireless NFC payment to Android devices without depending on third party apps. Also spotted was Miracast, meant for wirelessly video output of content to television, and a new option dubbed Keep for note-taking.

Android 4.4's alleged new camera UI was also detailed by the website, supposedly featuring a completely overhauled design, with Instagram-like features. Other new features said to be spotted in the camera UI include Tilt-Shift and Centre Focus, apart from Negative and Posterize effects. The site also refers to a new Print feature being available when viewing an image, reportedly allowing the user to save the image as a PDF locally, or even view network printers and print out a hard copy. The site further mentions that the overall UI has minor changes, however, the animations on the device are now much smoother.

The search giant has been in news ever since it announced the next iteration of its mobile operating system, Android 4.4 KitKat, with the Nexus 4 successor (expected to be its platform lead device), making multiple appearances on the Internet via image and specification leaks.

Prior to this, it was reported that Android's next iteration will see the light of day in October, as Nestle had revealed the first news about the launch of Android 4.4 KitKat on Facebook.