All New HTC One brochure purportedly leaked with name, specifications

Several mysteries surrounding the All New HTC One have now been confirmed, if a leaked brochure from Australian carrier Telstra is to be believed.

The leaked Telstra pricing plan brochure sourced by GSMArena indicates that the new flagship will indeed be named the All New HTC One (M8), and will feature a 5-inch full-HD scratch resistant display. Other than that, the mystery around the dual-camera lens has also seemingly been cleared through the brochure, with a name to the feature - Duo Camera.

This feature will reportedly bring improved low-light capabilities and will let the user select the focus of a shot after it's been taken. It will also enable the highlighting a specific area of a shot in a 'bokeh' effect, soften the background, and allow the user to add 3D effects. 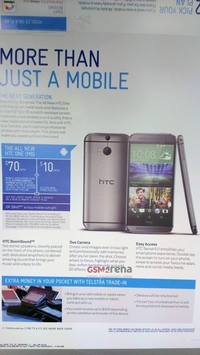 Additionally the leaked brochure indicated that the All New HTC One (M8) will flaunt the latest Sense 6.0 UI and dual "BoomSound" speakers.

So far, the leaked part of the brochure revealed only a few details of the All New HTC One (M8), and it will be interesting to see if HTC has managed to hide some details about the flagship smartphone before it launches the event scheduled for 25 March 2014.

The smartphone has been leaked in different ways already. Earlier on Tuesday, the device was leaked in a purported walkthrough video which indicated the device will run Android 4.4.2 KitKat and will feature HTC's new Sense 6.0 UI.

The uploader of the purported walkthrough video also claimed that the All New HTC One will come in three storage variants - 16GB, 32GB and 64GB.

In addition, another report by PhoneArena claims that the new flagship smartphone from HTC will come with wireless charging support. However, the report further speculates that the alleged wireless charging feature might be via a bundled accessory.
Affiliate links may be automatically generated - see our ethics statement for details.
Comments