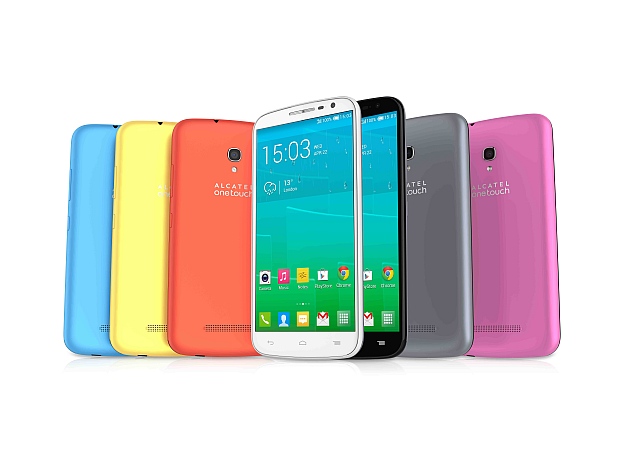 Alcatel is aiming at making a big splash at the Mobile World Congress 2014 at Barcelona, where the French-Chinese joint venture (Alcatel Mobile Phones) introduced five new devices, out of which three are smartphones and two are tablets.

The Alcatel OneTouch Pop S3 features a 4-inch screen with WVGA (480x800 pixels) resolution. The smartphone runs on Android 4.4 KitKat OS, and is powered by a 1.2GHz quad-core chip under the hood. Since the handset falls in the low-end segment, it misses a front-facing camera but sports a 5-megapixel rear camera capable of shooting full-HD videos. OneTouch Pop S3 is backed up by a 2000mAh and is available in five varied colour variants- Flash Yellow, Fresh Turquoise, Hot Pink, Red and Slate.

The Alcatel OneTouch Pop S9 smartphone sports a 6-inch IPS LCD display with HD (720x1280 pixel) resolution. The OneTouch Pop S9, like the OneTouch Pop S3, runs on the Android 4.4 KitKat OS and is powered by a 1.2GHz quad-core chip. The shooting options for the handset include an 8-megapixel rear camera with LED flash and a 2-megapixel front-facing shooter. The OneTouch S9 handset also houses a 3400mAh battery and is available in same colour variants as OneTouch Pop S7. The firm is yet to provide any price or availability for all three smartphones.

Coming to tablets, Alcatel introduced its OneTouch Pop 7S and OneTouch PIXI 7 tablets running Google's Android 4.4 KitKat OS. The Alcatel OneTouch Pop 7S tablet features a 7-inch IPS LCD screen paired with 600x1024 pixels resolution and a pixel density of 170ppi. The processor and RAM details for the tablet remain unknown, however it has been noted that the OneTouch Pop 7S comes with a 3-megapixel rear and 1.3-megapixel front-facing shooter. GPS, A-GPS, 4G LTE, Wi-Fi, Bluetooth and USB connectivity options are included in the tablet, as reported by Phonearena.

Another tablet by Alcatel, dubbed the OneTouch PIXI 7, has been introduced at the Mobile World Congress 2014 event featuring a 7-inch TFT screen with qHD (540x960 pixels) resolution. The tablet is powered by a 1.2GHz dual-core MediaTek 8117 processor paired with 512MB of RAM (for European regions) and 1GB of RAM (for Latin American region). The OneTouch PIXI 7 also includes a 4GB onboard storage, which is expandable up to 32GB via microSD card. The device additionally houses 0.3-megapixel cameras both in front and rear alongside a 2840mAh battery. The OneTouch PIXI 7 is available in also come with IR remote and Miracast support.The table is only a Wi-Fi model.