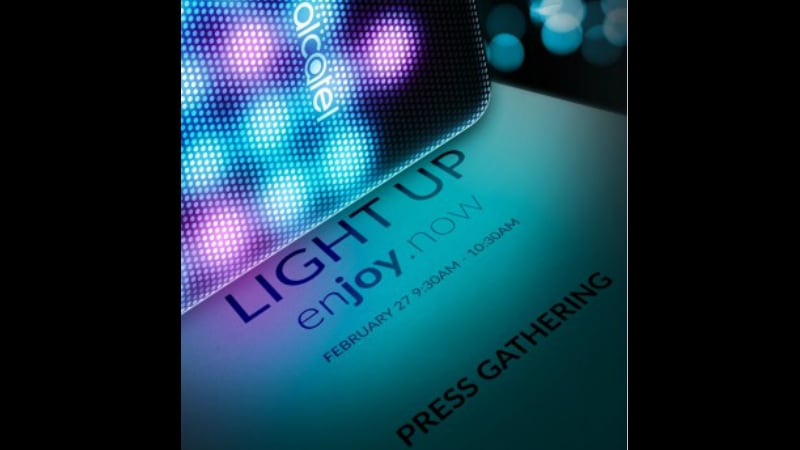 Every big tech company is coming to the Mobile World Congress this year. Samsung, Lenovo, Sony, and Nokia have confirmed their presence, and now TCL-brand Alcatel has also sent out invites for its press gathering. The company will host an event on February 27 in Barcelona, and is expected to launch as many as five smartphones then. The event has been scheduled at 9:30am CET (2pm IST)

The invite has the words 'Light Up' up front and centre - and features a lit-up device with a mesh-like design - something seen in a previous leak. The recent leak also tipped the launch of a modular smartphone at the event, with Moto Mods-like attachments. One of the attachments is tipped to be an LED dotted panel that will light up at the back, syncing to the music being played - similar to the JBL Pulse.

Previous reports claim that the smartphone will feature a 13-megapixel rear camera with dual-tone LED flash. It is further rumoured to pack an octa-core MediaTek processor under the hood. While this will be the big focus of the event, there will be a total of five smartphones that will be unveiled at MWC 2017. More clarity on these smartphones will only be attained on event day.

The modular design formula has not been so successful for companies like LG, though Motorola has managed some success. We wonder what add-ons Alcatel will bring to get the attention of customers. Apart from Alcatel, even Sony is expected to unveil as many as five smartphones at the event.

Lenovo's Moto brand is expected to take centre-stage to unveil the Moto G5 and Moto G5 Plus smartphones at an event in Barcelona on February 26.

Vivo V5 Plus vs OnePlus 3T vs Oppo F1 Plus: Battle of the Mid-Range Selfie Phones