Alcatel was not yet finished when it launched four new smartphones, a smartwatch and a 17.3-inch tablet during the ongoing IFA 2015 trade show. The company has also announced the OneTouch Idol 3C, a new variant of its OneTouch Idol 3 smartphone, the budget Pixi First smartphone, and the Pixi 3 (10) tablet.

The Alcatel OneTouch Idol 3C's (seen above) highlight is that it comes with swappable covers in White, Red, Green, Pink, and Yellow colours. In addition, the smartphone has a fully reversible nature that lets users answer calls even when holding it upside down. The smartphone features the same 5.5-inch full-HD (1080x1920 pixels) resolution IPS LCD display as seen on the Idol 3 (5.5). Other shared specifications are a 64-bit octa-core 1.5Ghz Snapdragon 615 processor, clubbed with 2GB RAM and Adreno 405 GPU.

The smartphone packs a 13-megapixel rear camera with f/2.0 aperture and an 8-megapixel front-facing camera. It also includes the same 16GB of inbuilt storage, which can be further expanded via microSD card (up to 128GB). The smartphone features the standard set of wireless connectivity options including NFC and Cat.4 4G LTE networks. The Idol 3C is comes backed by a 2910mAh battery. 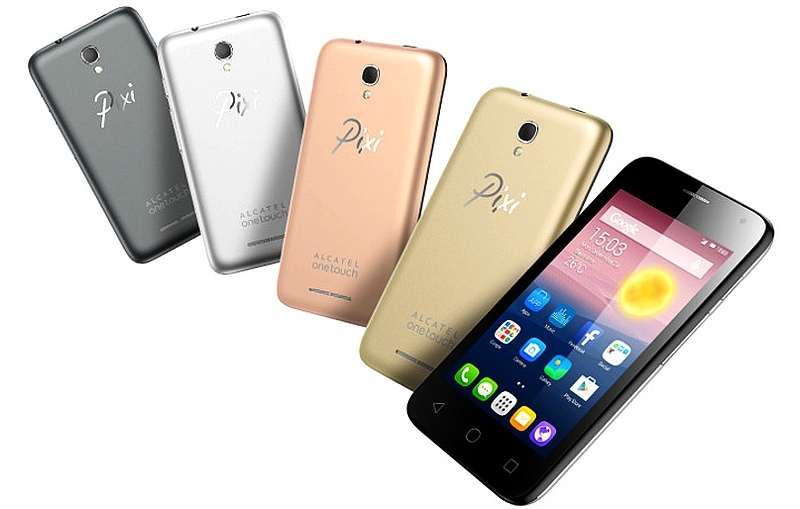 The Android 4.4 KitKat-based Alcatel OneTouch Pixi First (seen above) is the company's latest offering under the 'Pixi' range of budget smartphones in the market. The dual-SIM OneTouch Pixi First smartphone features a small 4-inch WVGA (480x800 pixels) resolution display and is powered by a quad-core Spreadtrum 7731 chipset clocked at 1.2GHz, clubbed with a low 512MB RAM.

The handset features 4GB of inbuilt storage, which is further expandable via microSD card. Besides a 5-megapixel rear camera, the smartphone also comes with 2-megapixel front-facing camera. The 3G-enabled OneTouch Pixi First is backed by a 1450mAh battery, which is rated to deliver up to 300 hours standby time and 7 hours talk time. The smartphone will arrive in Soft Slate, Metal Silver, Metal Gold and Rose Gold colour variants, and measures 122 X 64.4 x 9.7mm. 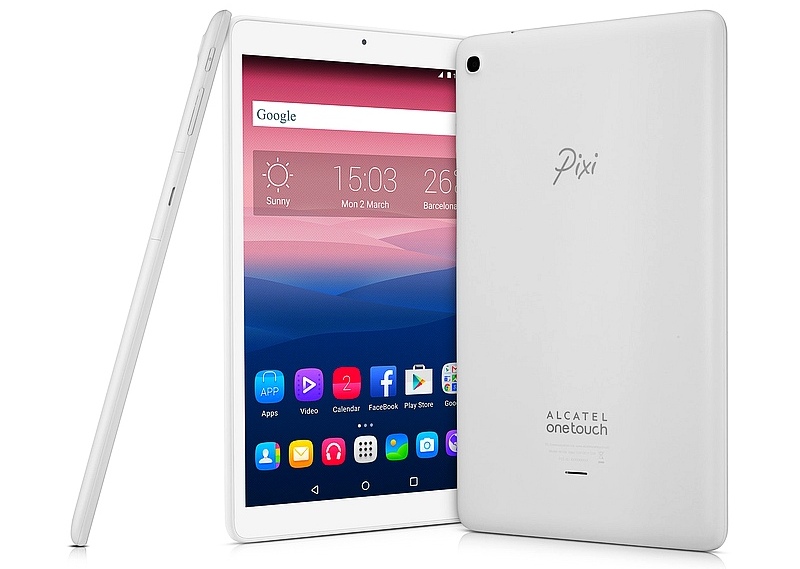 As for the Android 5.0 Lollipop-based Alcatel OneTouch Pixi 3 (10) tablet (seen above), the device features a 10-inch display with 1280x800 pixel resolution and is backed by a 32-bit dual-core MediaTek MT8127 processor clocked at 1.3GHz, clubbed with 1GB of RAM. It houses a 5-megapixel rear camera and a 2-megapixel front-facing camera. Also equipped is 16GB of inbuilt storage, which can be expanded via microSD card (up to 64GB). A 4060mAh battery backs the tablet, which measures 255.5 x 155 x 9.5mm. The tablet is also available in 3G and Wi-Fi only variants. Not all the details of the aforementioned devices have been disclosed yet, including price and availability.