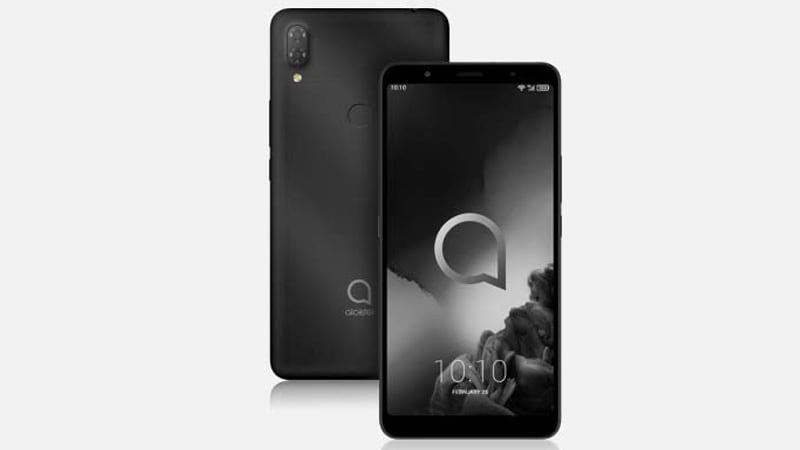 We're a couple of days away from the Mobile World Congress (MWC) 2019 and the leaks simply refuse to stop pouring in. The latest leak gives us a sneak peek at a big list of phones from Alcatel that will be announced in the next couple of days. The leak shows images and some of the main specifications of all the six smartphones, which appear to be part of the company's budget or mainstream lineup.

The leak comes from prolific tipster Evan Blass, who shared six press renders and specifications on Twitter. According to this, we can expect two new phones in the Alcatel 1 series and four new models in the Alcatel 3 series.

We begin with the Alcatel 1S, which features a 5.5-inch HD+ IPS display and is powered by a Spreadtrum SC9863A octa-core SoC. The phone will also have 3GB of RAM and 32GB of storage, a dual rear camera setup consisting of a 13-megapixel sensor and a 2-megapixel depth sensor and a 5-megapixel selfie camera. The phone will have a 3,060mAh capacity battery. It also has a fingerprint sensor.

The second phone in the series is the Alcatel 1V, which has an unnamed octa-core CPU but a low-resolution FWVGA (480x854) 5.5-inch display. There's a single 8-megapixel camera rear camera, a 5-megapixel front camera, a 2,460mAh battery and 1GB of RAM and 16GB of storage. Despite these low specs, the phone still has a fingerprint sensor and runs on Android Pie (Go Edition).

The four new models in the 3 series include the Alcatel 3L, Alcatel 3V, Alcatel 3C and the Alcatel 3. The Alcatel 3L is said to have a 5.9-inch HD+ Super Full View display and is powered by the Qualcomm Snapdragon 429 octa-core mobile platform. It will also have 2GB of RAM, 16GB of storage, a 13-megapixel and 5-megapixel rear cameras, an 8-megapixel selfie camera and a 3,500mAh battery. It doesn't have a fingerprint sensor but it will have face unlock. The phone will also ship with Android Oreo, with a scheduled update to Android Pie.

The second model is the Alcatel 3C, which sports a 6.7-inch HD+ IPS display, a MediaTek MTK8321 quad-core CPU, an 8-megapixel rear camera and a 5-megapixel front camera. It comes with 16GB of internal storage, 2GB of RAM, a 3000mAh battery, dual speakers, fingerprint sensor and face unlock. The Alcatel 3V features a 6.7-inch HD+ display with an octa-core CPU, dual 16-megapixel and 5-megapixel rear cameras, an 8-megapixel front camera, 32GB of storage and 3GB of RAM. It will also feature dual speakers, a fingerprint sensor and face unlock.

Finally, we have the Alcatel 3, which has a 5.94-inch HD+ IPS display with a 19.5:9 aspect ratio. It also has a Snapdragon 450 SoC, 3GB of RAM, 32GB of storage, a 13-megapixel rear camera and a 8-megapixel front camera. It also has a water-drop notch on the top, a rear facing fingerprint sensor and is backed by a 3,500mAh battery.

All the phones, with the exception of the 3L, will ship with Android 9 Pie out-of-the-box.