While Apple hasn't yet announced the availability of AirPower, an image depicting the much-anticipated wireless charging mat has been spotted on the retail box of the newly launched AirPods Wireless Charging Case. The pill-shaped design of AirPower on the back of AirPods Wireless Charging Case box essentially highlights its wireless charging capability. It suggests that the wireless charging mat supporting the new hardware would debut soon, though. This is notably not the first time when Apple has teased AirPower since its announcement back in September 2017. Earlier this year, the Cupertino company briefly mentioned AirPower support for the Smart Battery Case designed for the iPhone XS, iPhone XS Max, and iPhone XR.

Twitter user Chirs J. Caine on Tuesday shared the image confirming the appearance of the AirPower mat on the retail box of the AirPods Wireless Charging Case box. The image explicitly shows the pill-shaped design of the wireless charging mat that was announced in 2017 and was originally promised to debut in 2018.

Another user on Twitter, named Benjamin Bogdanovic, shared an image that has apparently confirmed AirPower support on the AirPods Wireless Charging Case. 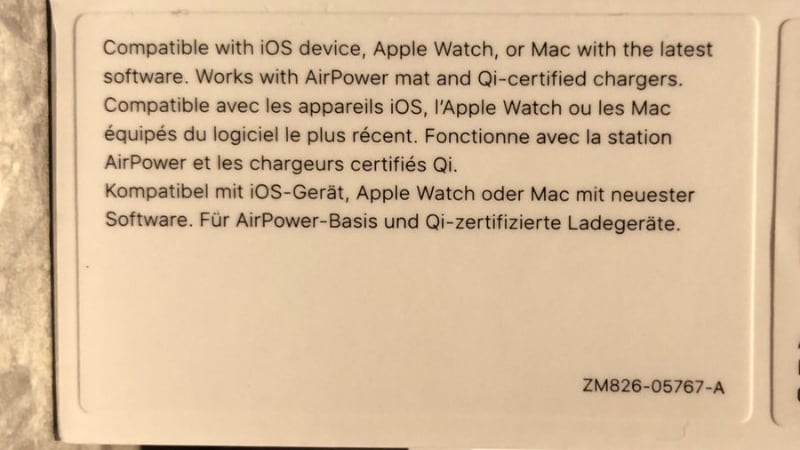 Apple hasn't yet announced any details around the availability of AirPower that is designed to charge not just the new iPhone models that support Qi wireless charging standard but also Apple Watch and AirPods. Nevertheless, the list of instances when the company mentioned its new development is long enough to affirm its existence.

Back in September last year, an iPhone XS 'Getting Started' guide had mentioned AirPower. Apple also in January briefly mentioned AirPower support for its new Smart Battery Case designed for the iPhone XS, iPhone XS Max, and iPhone XR. Moreover, Apple's Australian website was recently spotted with a fresh mockup of the AirPower mat, and references to the same image were also found in the source code of Apple's US site.

A report by Digitimes in January said that AirPower would go on sale later this year, but a more recent report by the publication claimed it would launch in late March - which would mean any moment now. A reference to the wireless charging mat was also recently spotted on the Apple Store page.

Prolific analyst Ming-Chi Kuo also last year predicted that Apple would formally launch AirPower in the first quarter of this year. However, we're yet to see an official confirmation pertaining to the development.

The arrival of the AirPods Wireless Charging Case that took place last week makes a strong reason for Apple to now bring AirPower. The Case adds wireless charging support to the new as well as old AirPods models. It is available for purchase in the US at $199 and will hit stores in India "later this spring" with a price tag of Rs. 7,500.

Further reading: Apple AirPower, AirPower, AirPods Wireless Charging Case, Apple
Jagmeet Singh Email Jagmeet
Jagmeet Singh writes about consumer technology for Gadgets 360, out of New Delhi. Jagmeet is a senior reporter for Gadgets 360, and has frequently written about apps, computer security, Internet services, and telecom developments. Jagmeet is available on Twitter at @JagmeetS13 or Email at jagmeets@ndtv.com. Please send in your leads and tips. More
No Man’s Sky Beyond VR, Marvel’s Iron Man VR, and Everything Else Announced at Sony PlayStation State of Play March 2019