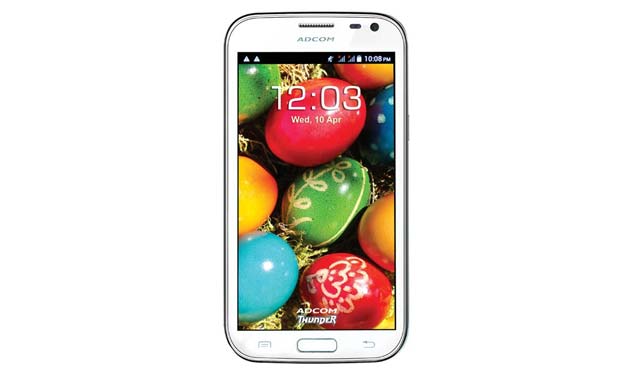 The company has come out with ADCOM Thunder A 530 HD smartphone, which is loaded with 5.3-inch screen, dual-core processor, 8MP camera with Panorma, IPS LCD, Android 4.1, 4GB ROM and 512MB RAM. This smartphone is priced at Rs. 8,999.

ADCOM Thunder A 350 is the cheapest smartphone that the company has to offer for Rs. 3,199. It packs in 1GHz processor, 256 MB of RAM and runs on Android 4.0. Other specifications include 3.5-inch capacitive touchscreen, 3.2MP rear camera and 0.3MP front camera.

ADCOM Thunder A 400 is priced at Rs. 3,999 and has similar specifications as Adcom Thunder A 350. However, it has a larger 4-inches HVGA LCD touchscreen and 512MB of RAM.

"We are a part of this growing industry and trying to create our unique position by providing all the advantages of smart phones with in the budget of a layman," ADCOM India Group Founder JL Bhatia said here.

Starting at a price range as low as Rs. 3,199, it goes up to Rs. 8,999, these phones are within the reach of the common man, who wants a smartphone with almost all the features that come in a premium handset, he added.

ADCOM Chairman Sanjeev Bhatia said after-sale service of the product has been a weak point when it comes to mobile industry.

"As a part of our warranty, on-site and online service and support is available for our users throughout the country," he said adding the company expects to sell 1,00,000 handsets in the current fiscal.

ADCOM, part of the New Delhi-based Advantage Group, imports IT and technology products, tablets and mobiles in India.

(WIth Inputs from PTI)

Mobiles launched in May 2013
Comments

Xolo Q1000 with quad-core processor, 5-inch display to be launched for Rs.14,999
150 mobile towers to be set up in Jammu and Kashmir for stronger network: Kruparani Killi