Acer has launched two new handsets in India, namely the Liquid Jade and Liquid E700, at Rs. 16,999 and Rs. 11,999 respectively, exclusively via Snapdeal. Notably the handsets were introduced in May this year during the Computex 2014 event.

Starting with the Acer Liquid Jade, we see the dual-SIM smartphone runs on Android 4.4 KitKat. At the time of its announcement, Acer said the smartphone 'targets users for whom every device or accessory carried is an expression of their style and personality.'

It boasts of a 5-inch IPS 'Zero Air Gap' display with an HD (720x1280 pixel) resolution and a Gorilla Glass 3 screen. The version of the Liquid Jade made available in India is powered by a 1.3GHz quad-core MediaTek MT6582 processor with a Mali 400 GPU that is coupled with 2GB of RAM. The smartphone features 16GB of built-in storage that is expandable by microSD card (up to 32GB). At the time of the announcement, the handset featured 1GB of RAM and 8GB of inbuilt storage.

The Liquid Jade features a 13-megapixel rear camera with an f/1.8 aperture, 0.3 second autofocus, and 1080p HD video recording. It also features a 2-megapixel front-facing camera. In terms of connectivity options, it offers 3G, Wi-Fi 802.11 b/g/n, Bluetooth, Micro-USB, A-GPS, and a 3.5mm audio jack. Dimensions of the Liquid Jade are 140.5x69x7.5mm, while the smartphone is backed by a 2100mAh battery. 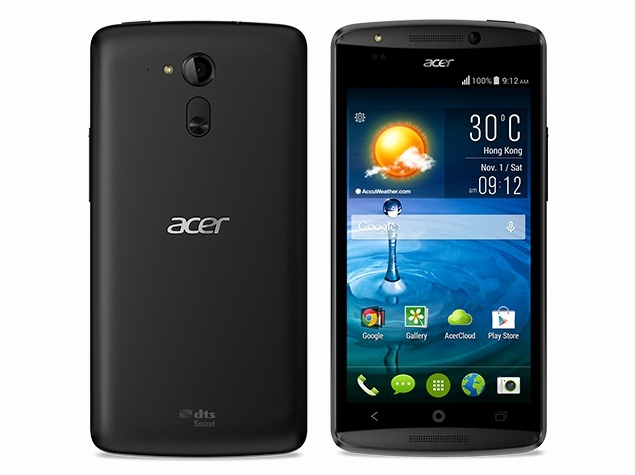 The Acer Liquid E700 also runs on Android 4.4 KitKat and can support up to three SIM cards. The handset was announced along with the Liquid E600, which could also support three SIM cards.

The Liquid E700 (seen above) sports a 5-inch IPS display with a HD (720x1280 pixel) resolution. It is powered by a 1.2GHz quad-core MediaTek MT6582 SoC coupled with Mali 400 GPU, and 2GB of RAM. Other specifications include the 8-megapixel autofocus camera with LED flash, and a 2-megapixel front-facing camera with flash.

The smartphone sports 16GB of built-in storage, with microSD card expandability via microSD card (maximum limit unspecified). Connectivity options on the Acer Liquid E700 include 3G, Wi-Fi 802.11 b/g/n, Bluetooth 4.0, Micro-USB, GPS, and 3.5mm audio jack. It is powered by a large 3500mAh battery. It weighs in at 155 grams.

"At Acer we are conscious of the world getting faster and demanding more from life in everyway.Their dependence on technology is growing and so we want to make their lives simpler and enriching. Therefore, while the Liquid Jade appeals to the elegant, beauty conscious and highly social user, the Liquid E700 is more suited to the upbeat business traveller who demands to remain connected round the clock. Its 'always on' capability helps users to multi-task between work and entertainment. All this comes sealed with the promise of quality from the Acer brand name," said Allen Burnes, Vice President Smart Phones Business, Acer Group at the launch.

"Mobile and Tablets are one of the fastest growing segments for Snapdeal.com with customers becoming more feature and value conscious. Acer is globally known for its performance and smart computing systems, they are now entering the Indian smartphone market and we are happy to partner with them in this journey. At Snapdeal.com, we are constantly on the lookout for offering our customers great value buys and Acer smartphones are a valuable addition to our smartphone category," added Abhishek Passi, Vice President, Business Strategy, Snapdeal at the launch.