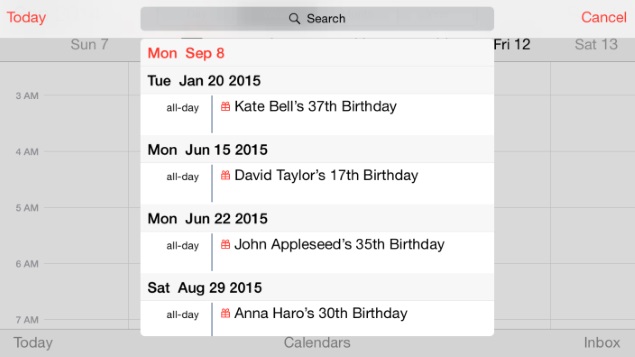 We are just a day away from Apple's much-anticipated September 9 event; however, there's no stopping the leaks related to the next iPhone, likely to be called iPhone 6 and unveiled in two screen sizes - 4.7-inch and 5.5-inch model.

9to5mac details a new feature that could possibly be limited to the larger (5.5-inch) model of the next iPhone. In a report, the site claims that the rumoured 5.5-inch iPhone 6 might run certain apps in landscape mode for a dual-pane interface similar to the iPad, while portrait mode is unlikely to change.

The report cites developer Steven Troughton-Smith who modified the iOS simulator to run at 736x414 points which gives 828x1472 pixels resolution at '2X' pixel-doubling, and 1242x2208 at (3X) pixel-tripling. Notably, the screen resolution of 828x1472 pixels for the next-generation iPhone 6 was tipped previously via iOS 8 files inside both the Xcode 6 beta 5 and the Xcode 6 beta 6 SDKs.

The screenshots provided by the developer show the purported iPhone 6 5.5-inch model running calendar app in an iPad-like interface. It was further clarified in the report that though iOS simulator was unable to run any other apps on the device with an interface similar to the iPad, Apple will probably optimise the some interfaces for the larger (5.5-inch) iPhone model.

We remind readers however, that nothing is official yet and that all such leaks must be taken with a pinch of salt.

Apple has been for a while rumoured to include new split-screen multitasking feature in the next-generation of iPad tablets, which are expected to be launched at a separate event at the end of September, or in early October.

Earlier on Monday, we were treated with a flurry of image and video leaks that purportedly revealed more details about the unannounced handset.