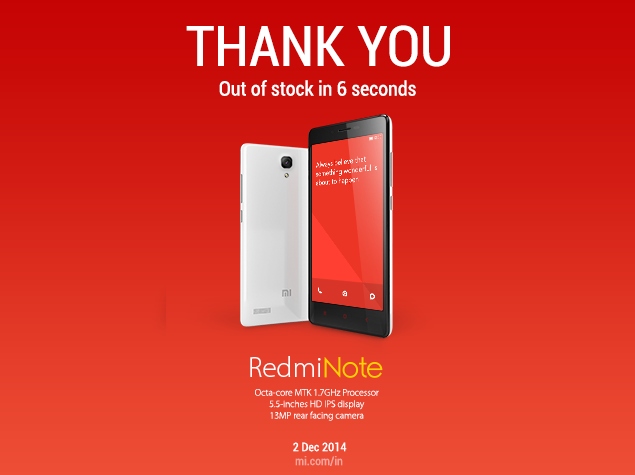 Xiaomi's first flash sale for its newest budget offering in India, the Redmi Note, has been successful in the manner the Mi 3 and Redmi 1S flash sales have been in the past.

The Chinese smartphone manufacturer has announced that 50,000 units of the Xiaomi Redmi Note that were up for purchase in the first flash sale went out of stock in just 6 seconds on Flipkart, the firm's exclusive retail partner in India. Xiaomi Vice President, Hugo Barra, made the announcement on Twitter. The company's official Twitter handle for India also announced the feat.

The firm has also announced that the next flash sale for the Redmi Note will be on December 9, and that registration will be open from Tuesday 6pm IST to Monday, December 8, midnight.

The Redmi Note bears a 5.5-inch 720x1280-pixel IPS LCD screen and features a 13-megapixel rear autofocus camera with LED flash, as well as a 5-megapixel front-facing camera. It comes with 8GB of built-in storage with expansion via microSD card (up to 32GB).

Connectivity options on the Redmi Note include GPRS/ EDGE, 3G, Wi-Fi 802.11 b/g/n with Wi-Fi Direct and hotspot functionality, Bluetooth 4.0, a Micro-USB port with OTG support, and A-GPS. It is powered by a 3,100mAh battery.

Notably, what is arguably the cheapest 4G LTE smartphone in India, the Redmi Note 4G, will launch in India in the second half of December at Rs. 9,999. Apart from flash sales, customers will have to register separately to buy a Redmi Note 4G from Airtel stores.

The Redmi Note 4G features identical specifications, excepting a different processor, number of SIM cards support, and Android version. The Redmi Note 4G runs on a quad-core 1.6GHz Snapdragon 400 CPU coupled with 2GB of RAM, and is a single-SIM device that comes with Android 4.4.2 KitKat and the MIUI v5 skin. Xiaomi has indicated that updates to Android 5.0 Lollipop will be available in the future, though no time frame was announced.

Xbox One Dominates the US With Black Friday Deals, Gets Dominated in India
DoT Plans to Auction 3G Spectrum in February, Says Trai