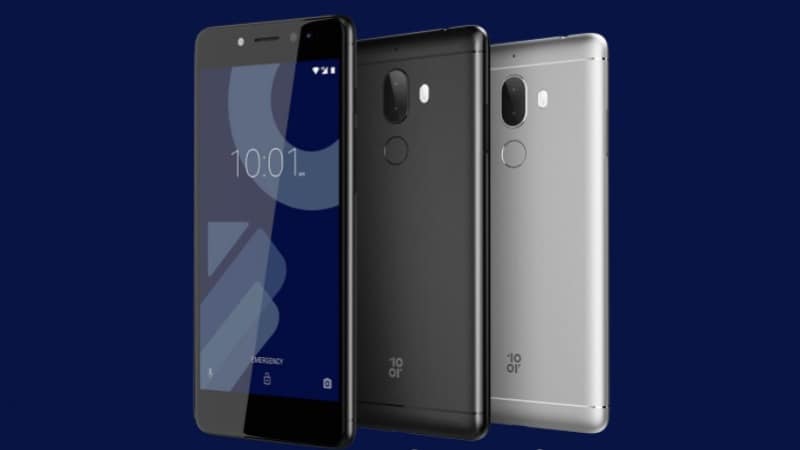 Earlier this month, new smartphone brand 10.or (pronounced tenor) by Chinese firm Huaqin Technology launched its 10.or E smartphone in India. Now, the company has launched its new smartphone under the same brand, called 10.or G, in India in two memory variants - the 3GB RAM + 32GB storage variant priced at Rs. 10,999, and the 4GB RAM + 64GB storage variant, which is priced at Rs. 12,999. It will be made available in Go Grey and Beyond Black colours through a sale starting October 3.

One of the highlight features on the newly launched 10.or G smartphone is its dual camera setup, which consists of two 13-megapixel sensors with dual LED flash, and a 16-megapixel camera at front, with flash, for taking selfies. The smartphone also houses a 4000mAh battery and while it runs Android 7.1.2 Nougat out-of-the-box, the company has announced that it will be upgradeable to Android Oreo as well.

Coming to the other specifications, the dual-SIM 10.or G packs a 5.5-inch full-HD (1080x1920 pixels) display and is powered by Snapdragon 626 SoC. The storage on the handset is expandable via microSD card (up to 128GB). The 10.or G measures 155x76x8.5mm and weighs 170 grams. The connectivity options offered by the smartphone include 4G VoLTE, Wi-Fi 802.11 b/g/n, and Bluetooth 4.2. The on-board sensors include accelerometer, gyroscope, compass, ambient light sensors, and fingerprint sensor.

"We welcome the 10.or E and the 10.or G series smartphones to our line of exclusives on Amazon.in. These smartphones combine insights from Indian customers' feedback with world-class reliability and quality standards to create a phone that is developed especially for the Indian market. We are happy that Amazon.in is the destination of choice for customers by combining exclusive access with a convenient, trusted shopping experience." Arun Srinivasan, director of smartphones and consumer electronics at Amazon India was quoted as saying in the company's release.