Google executives shared the stage with Xiaomi chiefs at a media event in New Delhi on Tuesday as the Chinese phone maker unveiled its "new flagship" Mi A1 smartphone. Google's presence at the event was essential. Xiaomi's Mi A1 is the latest phone to be launched under Google's Android One programme, a three-year-old initiative from Google, which in the past year has been presumed dead by many. It's anything but that, Google executives said.

Both companies share another vision with the Mi A1 smartphone, the most powerful Android One phone to date: It's a phone for the global market, a stark contrast from Xiaomi's usual strategy where its devices, especially smartphones, are only made available in a handful of regions. Google said the Mi A1 smartphone will be sold in "dozens of countries" including India, Russia, Indonesia, Chile, Mexico, Singapore, and Taiwan. The Mi A1 smartphone is priced at Rs. 14,999 ($235).

The Xiaomi Mi A1 smartphone features a 5.5-inch full-HD (1080x1920 pixels) display. It also offers a duo of 12-megapixel rear cameras, one with telephoto capability and 2X optical zoom feature. On the front, for the selfie enthusiasts is a 5-megapixel shooter. The dual-SIM capable Mi A1 smartphone houses a Snapdragon 625 octa-core SoC, 4GB of RAM, 64GB internal storage, IR blaster, a 3080mAh battery, a fingerprint scanner, modems for 4G LTE bands in its gold- and black-coloured thin, full-metal unibody form factor.

Google rejected the claims that it has been neglecting its Android One programme. Citing an example, the company said Android One devices are among the top selling phones in SoftBank-owned Y!Mobile stores. "We’re extending our commitment to Android One by working with more partners to build phones that run a software experience designed by Google," it said, adding that it has expanded its program to "new partners, geographies and price points" in the past year. "General Mobile has committed a full portfolio of Android One devices in Turkey," the company reminded. 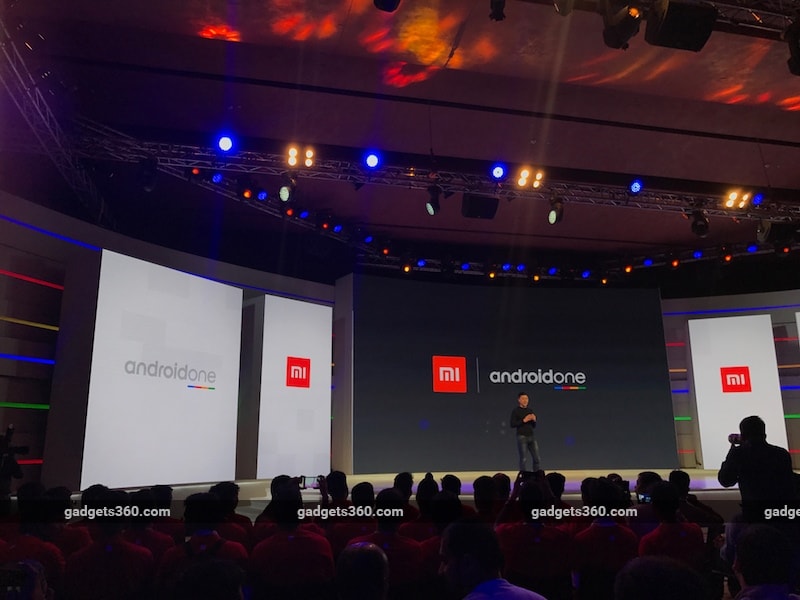 "Until now Android One smartphones were only available in lower range of specs. Today we want to confirm and reinforce that Android One is no longer just about low-end smartphones," Jon Gold, global director of Android programs said at the event. "Indians now have a plethora of good smartphones to choose from. They also have great fast Internet connection. But good hardware and fast network don't alone make for a good experience."

The Xiaomi Mi A1, which has been manufactured in India, runs Android 7.1.1 software update and will receive "fresh" and "pure" OS upgrades from Google in a timely manner, the companies said. Google said it will push Android Oreo update to the phone by year-end. A stock Android smartphone - the pure version of Android without any apps or features from carriers and the manufacturer - from Xiaomi might please many customers. In case of the Mi A1, however, the company says three of its apps, including its camera app, will be pre-installed on the phone.

"It's a fascinating move, especially because Xiaomi has always leaned so heavily on its own UI," Jan Dawson, chief analyst at Jackdaw Research told Gadgets 360. "In some ways, Android One was created precisely to counteract the sorts of things Xiaomi was doing with Android. And yes, recently it's felt like Android One was being de-emphasized even by Google in favour of other projects for emerging markets. It's a big test of Xiaomi's brand and hardware design given that the custom version of Android it usually uses has always been a selling point.”

The speculations of Google dropping Android One programme hit new high at its developer conference in May this year, when the company announced Android Go, a program similar to Android One that also aims to improve the budget smartphones ecosystem. An optimised version of Android, Go would work even with smartphones that have only 512MB of memory and have access to a plethora of apps designed for low-bandwidth.

In a conversation with Gadgets 360 in May, Sameer Samat, VP of Product Management for Android and Google Play, said Android Go was an evolved version of Android One. Samat added that some smartphone manufacturers wanted only to embrace part of Android One's requirements - pure Android with timely updates, but they wanted more flexibility with hardware choice. Earlier Google mandated what the hardware specifications for an Android One phone.

Smartphones launched under Android One programme had 0.2 percent market share as of 2016, according to research analyst Karn Chauhan of Counterpoint. "Google has pivoted its strategy for Android One by targeting affordable premium segment and targeting broad range of users than just entry level smartphones. By targeting mid segment, Google stands a chance to target mature smartphone users looking for pure Android experience," Chauhan added.

Even as Google reaffirms its commitment to Android One, it's unclear how many more smartphones in this program we could expect in the coming months - and whether Google wants too many such smartphones in the first place. "It's a win-win partnership for both of us, and we look forward to more opportunities in the future," a Xiaomi executive said.

"There's a big question about whether this will be a one off or the beginning of a line of more stock Android phones. Motorola majored on nearly stock Android for a while but it didn't do them a ton of good and they've arguably moved away from that recently," analyst Dawson added.