Xiaomi Poco F1 vs OnePlus 6 vs Asus ZenFone 5Z: Which One Should You Buy?

The upper mid-range segment has turned into a hotspot for budget flagship devices. OnePlus has built its brand in this space over the years, making it the first choice for people looking for flagship hardware at mainstream prices. The OnePlus 6 (Review) has become an easy pick for people on a budget. However, unlike many of its predecessors, the OnePlus 6 does not have an unopposed run.

The Asus ZenFone 5Z (Review) has managed to undercut the OnePlus 6, but the strongest competition yet has come in the form of the Xiaomi Poco F1 (Review), which is priced even more aggressively. How aggressively, you might ask? Well, the difference between the similarly spec’d base variants of the OnePlus 6 and the Poco F1 is a massive Rs. 14,000. Is the Poco F1 a super value-for-money smartphone, or does it have hidden downsides? Are the ZenFone 5Z and the OnePlus 6 still worth the premium they command? We put all three phones head to head.

Take a look at these devices and you’ll quickly notice that the Asus ZenFone 5Z and OnePlus 6 sport glass backs while the Poco F1 is available with either polycarbonate or Kevlar backs. While the Kevlar option is unique (and more expensive), the polycarbonate back does not feel premium compared to the other two phones. All three smartphones have notches at the top of their displays, with the Poco F1 having the biggest one while the OnePlus 6 is on the other end of the scale.

The buttons on the OnePlus 6 are easier to reach compared to the Poco F1 and the ZenFone 5Z. Unique to the OnePlus 6 is the convenient alert slider that lets you select between different ringing profiles. This phone is also water resistant to some extent, while the other two aren’t. In terms of colour options, the ZenFone 5Z is available in Meteor Silver and Midnight Blue. As for the OnePlus 6, the base variant is only available in the Mirror Black finish; if you want the Silk White, Midnight Black or Red finishes, you’ll need to opt for at least the 128GB version of the phone. The Poco F1 is available in Graphite Black, Steel Blue, and Rosso Red, all with a polycarbonate back; if you want the Armoured Edition with the Kevlar back, you’ll need to shell out Rs. 29,999.

We preferred the ZenFone 5Z when we compared it with the OnePlus 6, primarily because of its low weight and compactness. The Poco F1 is heavier because of its big battery, and if we had to pick between this and the ZenFone 5Z, we’d pick the latter again because we found it to be the most comfortable to use.

Asus ZenFone 5Z vs OnePlus 6: Which One Should You Buy?

The main thing that’s common among these three smartphones is the Qualcomm Snapdragon 845 processor. This is the most powerful smartphone chip to come out of Qualcomm’s stable, and now powers flagships from multiple manufacturers. This should put all three phones on an equal footing but Xiaomi has outfitted the Poco F1 with liquid cooling, which helps it run at higher speeds for longer. The OnePlus 6 managed to get the highest score in AnTuTu, but with real-world usage, you won’t be able to feel any difference between these smartphones. 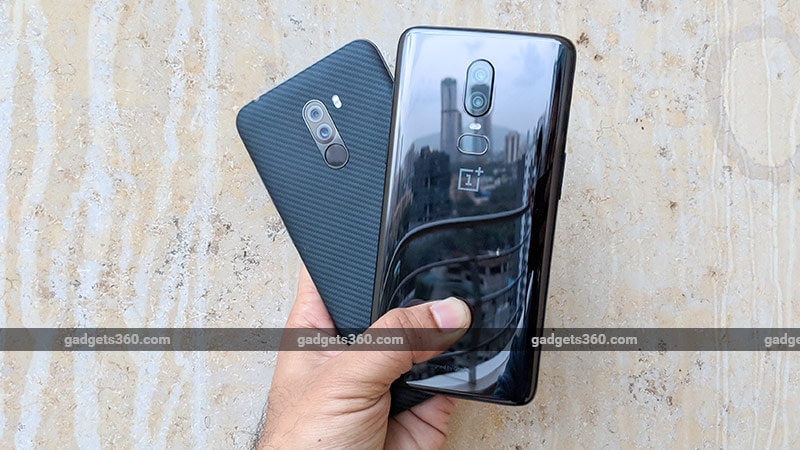 You get Bluetooth 5, UFS 2.1 storage, dual-band WiFi with all three phones. The Poco F1 misses out on NFC while the ZenFone 5Z and OnePlus 6 have it. The ZenFone 5Z also has a colour temperature sensor which helps it tweak the display based on ambient light and the white balance right when taking photos. All phones have fingerprint scanners at the back, and can be unlocked using face recognition. Only the Xiaomi Poco F1 has an infrared camera and emitter that makes face recognition possible even in low-light conditions. The Poco F1 and OnePlus 6 tie for the top spot when it comes to their fingerprint scanners, but the Poco F1 is the fastest to unlock using only face recognition.

None of these phones have a true stereo speaker setup, but the Poco F1 and ZenFone 5Z manage to create a stereo-like effect using the earpiece as a second speaker. All three phones are dual-SIM devices and support dual 4G as well as VoLTE.

With a top-of-the-line processor, there is no doubt that these smartphones deliver smooth lag-free experiences. We did not observe any lag or stutter when using them, and multitasking was a breeze. In many benchmarks such as AnTuTu, the OnePlus 6 scored the highest by small margins, while the Poco F1 and ZenFone 5Z were still in the same league.

Each smartphone has a custom version of Android Oreo. The OnePlus 6 has Oxygen OS which is only slightly different from stock Android, at least in terms of looks. It is currently based on Android 8.1 Oreo with the July 2018 security patch. You get a lot of gestures, a reading mode, and a monochrome mode, which are all handy. The ZenFone 5Z has its custom ZenUI with a few extra features baked in. Some of these features use AI and machine learning, and we found them to be useful when we reviewed the phone.

The ZenFone 5Z was running Android 8.0 Oreo with the June security patch at the time of this comparison. The Poco F1 runs Xiaomi’s MIUI 9 based on Android 8.1 Oreo, with a Poco theme to distinguish it from other Xiaomi smartphones. Our unit had received up to the June 2018 security patch. MIUI has a lot of customisations, and finding the right setting in the Settings app isn’t easy without the search function.

In terms of software updates, OnePlus has enrolled the 6 in the Android 9 Beta programme so it might be the first of the three to get an official Android Pie update. Xiaomi and Asus have both promised updates to Android Pie by Q4 2018.

We played PUBG on all three phones to see how they fared. It recommended the High quality preset by default for all three phones, given the hardware they sport. We played the game on all three phones at the same time in an air-conditioned room. All of them managed to deliver good performance without getting uncomfortable to the touch. Xiaomi’s Poco F1 and the OnePlus 6 were slightly warm to the touch, but the ZenFone 5Z was warmer than the other two devices. We saw that the OnePlus 6 had lower battery drain compared to the other two devices after playing the game for half an hour. The ZenFone 5Z and the OnePlus 6 have gaming modes that claim to boost performance, block notifications, and lock the navigation buttons down. The Poco F1 does not have any such feature. Battery charging times are crucial; you don’t want to left unable to use your phone when your battery is too low. We drained all three devices completely before plugging them into the chargers they ship with. The OnePlus 6 boasts of the company’s own Dash Charge feature and comes with a 20W adapter, while the ZenFone 5Z and Poco F1 both support Qualcomm Quick Charge 3.0 and come with 18W chargers. The Poco F1 has the highest battery capacity of 4000mAh while the others both have 3300mAh units.

In our HD video loop test, it was unsurprisingly the Poco F1 that managed to survive the longest, lat 17 hours, 5 minutes. The OnePlus 6 lasted 10 hours, 59 minutes, and the ZenFone 5Z ran for 10 hours, 42 minutes. All three phones will last you through one day with moderate use but the Poco F1 can easily outlast the other two thanks to its bigger battery.

When we compared the OnePlus 6 to the ZenFone 5Z, we found that the 5Z had the better cameras. For this comparison, we did fresh tests with all three phones since the ZenFone 5Z and OnePlus 6 have both received software updates that claim to improve camera performance. All phones have dual rear cameras. While the Poco F1 and OnePlus 6 have depth sensors, the ZenFone 5Z’s secondary camera has a wide-angle lens which is useful to capture a wider field of view. The Poco F1 and ZenFone 5Z both have AI-enhanced apps that can set parameters depending on what you’re pointing at before you take a shot, while the OnePlus does not have this feature. 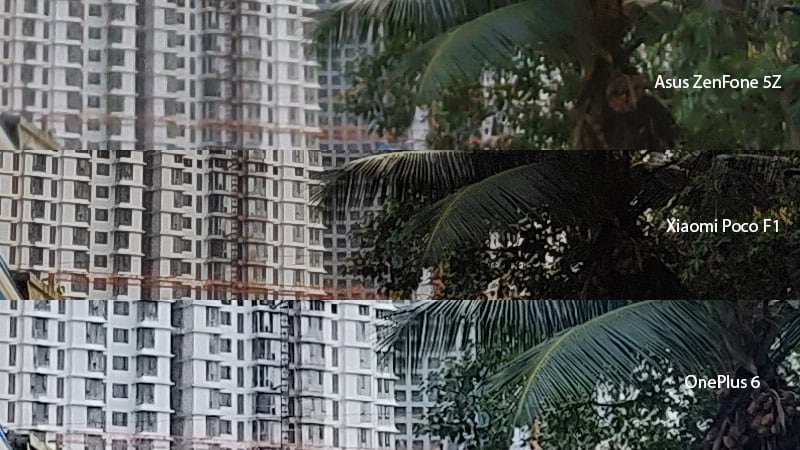 In macros, the OnePlus 6 delivered sharper edges and better details. The Poco F1’s shots were punchier compared to the other two. The ZenFone 5Z’s macro photos had soft edges, causing it to fall behind. 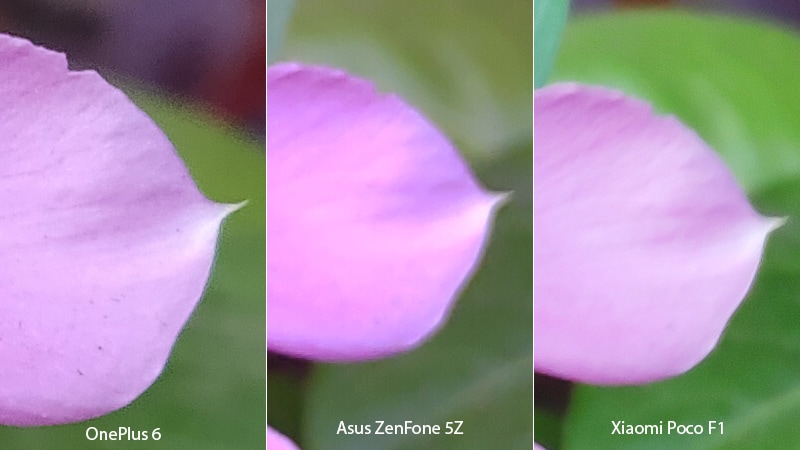 When shooting portraits, each of these smartphones managed a good bokeh effect, and good edge detection. It was the ZenFone 5Z that managed to deliver the most accurate colours, followed by the Poco F1, while the portraits taken by the OnePlus 6 looked washed-out in comparison.

In low light, the Poco F1 failed to capture good details, and its noise reduction led to a drop in sharpness. The 5Z fared better than the Poco F1 in terms of details, but aggressive noise reduction also resulted in artifacts in the output. The OnePlus 6 managed the best details of detail among the three but its output is slightly grainy. 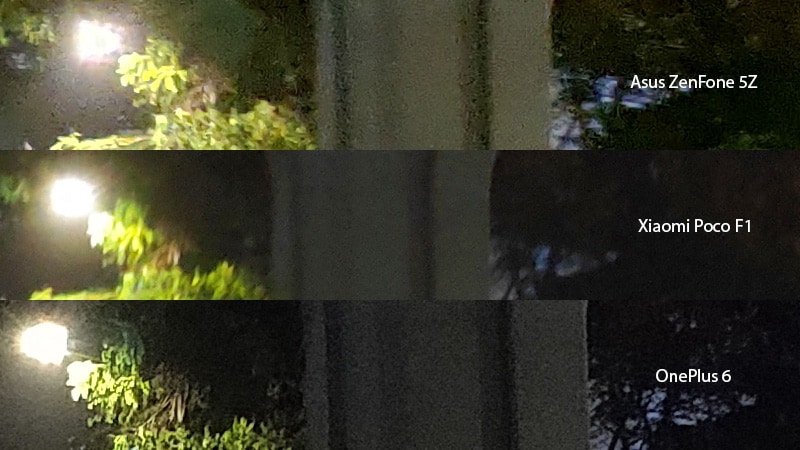 The Poco F1 has a 20-megapixel selfie camera, while the OnePlus 6 and ZenFone 5Z have 16-megapixel and 8-megapixel cameras respectively. While the photos taken with all three are good enough to be shared on social media, it was the OnePlus 6 that managed to deliver the most detailed selfies.

Verdict
When we first compared the OnePlus 6 to the Asus ZenFone 5Z, it fell behind in terms of camera performance. Now, software updates seem to have given the cameras on the OnePlus 6 a massive boost since we last compared it. The cameras on the Poco F1 didn’t impress us much when we reviewed it, and in this comparison, it still takes the last spot. Cameras aside, these phones offer similar experiences when it comes to performance. The Poco F1 is the most affordable of the three, but availability is an issue, since it is only sold through flash sales. If you do get your hands on the base variant of the Poco F1, you’ll have to live with the polycarbonate back, which doesn’t feel as premium as the glass backs of the other two phones.

If you don’t care about anything apart from performance, the Poco F1 gives you what you want at a surprisingly low price. Between the ZenFone 5Z and the OnePlus 6, the OnePlus 6 is the better all-rounder, but it’s probably not worth the Rs. 5,000 premium it is currently commanding over the 5Z, making the ZenFone 5Z our pick between the two.

Further reading: Xiaomi Poco F1, Asus ZenFone 5, OnePlus 6
Aditya Shenoy Email Aditya Aditya Shenoy reviews smartphones, wearables, headphones and speakers for Gadgets 360, out of Mumbai. Aditya is a reviewer for Gadgets 360 and has written extensively about smartphones, software updates, and upcoming devices. Aditya is available on Twitter at @adishenoy, and you can mail him at adityashenoy@ndtv.com, so please send in your leads and tips. More
Google's Empty Chair at Senate Marks Unforced Error
Volvo 360c Unveiled, the Company's Self-Driving Robo-Taxi

Xiaomi Poco F1 vs OnePlus 6 vs Asus ZenFone 5Z: Which One Should You Buy?
Comment