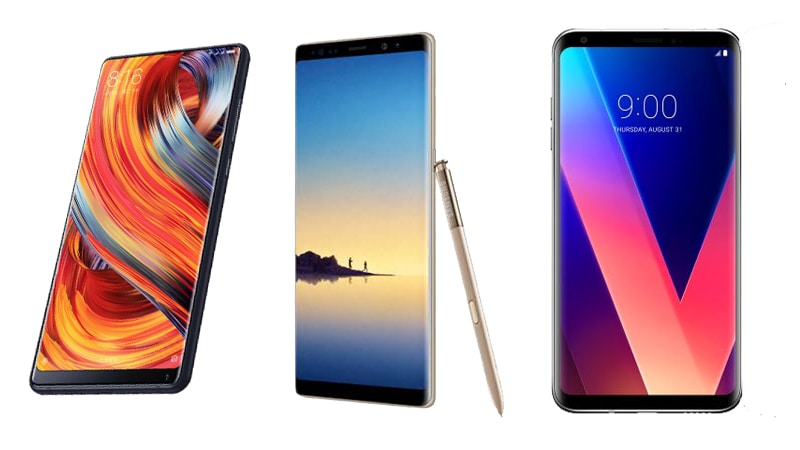 Xiaomi Mi MIX 2 is the latest smartphone in town touting a bezel-less display, joining the ranks of Samsung Galaxy Note 8 and LG V30. These three are the most prominent smartphones with bezel-less design launched in the last few weeks, and come with top-end features that give them the title of the flagship for their respective brands. If you are looking to purchase a smartphone that will make heads turn with its design but also does not compromise on the performance, the three models should suffice. To make your buying decision easier, we have compared the Xiaomi Mi MIX 2, Samsung Galaxy Note 8 and LG V30 price, specifications, and features below. Of course, iPhone X will be joining this selection pretty soon when it launches Tuesday, but until the official event is over and all the features out, we will not include it in our comparison.

Xiaomi Mi MIX 2, the latest entrant to the club of bezel-less smartphones, sports a 5.99-inch FHD (1080x2160-pixel) IPS display with aspect ratio of 18:9. Under the hood of the Android 7.1 Nougat phone is the 2.45GHz Snapdragon 835 processor with 6GB of RAM, and comes in three non-expandable storage options – 64GB, 128GB, and 256GB. The 12-megapixel rear camera Sony IMX386 sensor with 1.25-micron pixels, 5-element lens, and f/2.0 aperture, while the front camera has 5-megapixel sensor; both the cameras support facial recognition to unlock the handset. Connectivity features of Xiaomi Mi MIX 2 include 4G LTE, dual-band Wi-Fi, Bluetooth 5.0, USB Type-C, and its battery capacity is 3400mAh.

The standard Mi MIX 2 variant comes in Black colour option, and features a black lens coating on the front and rear camera, as well as 18K gold plated camera ring on the back. The body of the phone is made using 7-Series aluminium. There’s also a Special Edition Mi MIX 2 variant with 8GB RAM, 128GB storage, and Black and White colour options.

Samsung Galaxy Note 8, on the other hand, follows the bezel-less Infinity Display design language like its S-series siblings. In fact, it sports a 6.3-inch AMOLED screen with QHD+ resolution (1440x2960pixel), and support for S Pen stylus. Its on-screen ‘soft’ Home button integrates features 3D Touch-like functionality as well. The Galaxy Note 8 is also powered by Snapdragon 835 processor, though the India version will likely be powered by the Samsung Exynos octa-core chipset. It will be backed by 6GB of RAM and 64GB internal storage, with provision to expand the storage by up to 256GB via microSD card.

Samsung Galaxy Note 8 has a dust- and water-resistant body, and S Pen support

Coming to the Galaxy Note 8 camera, you get dual 12-megapixel rear cameras with OIS and f/1.7 wide-angle lens and f/2.4 telephoto lens with 2x optical zoom. In front is the 8-megapixel camera with f/1.7 aperture. Powering the smartphone is a 3300mAh battery with wireless charging support, and the connectivity features include Cat 16 LTE, USB Type-C, dual-band Wi-Fi, and NFC and MST for Samsung Pay. With IP68 certification, the Android 7.1.1 Nougat handset is water- and dust-resistant. With the S-Pen, users will be able to handwrite a message, add special effects and share it as an animated GIF via several popular messaging and social apps.

LG V30 comes with 6-inch QHD+ (1440x2880pixel) OLED FullVision display with DayDream VR support. There’s also an always-on display to replace the second screen seen on previous V-series phones, along with an optional semi-transparent Floating Bar. This handset too is powered by the Snapdragon 835 chipset, paired with 4GB RAM. The standard model comes with 64GB storage, while the V30+ model sports 128GB storage; both allow the user to expand storage by up to 2TB using microSD cards.

The LG V30 also features a dual rear camera setup with one 16-megapixel sensor coupled with f/1.6 aperture and 71-degree wide-angle lens, and one 13-megapixel sensor with a 120-degree wide-angle lens and an aperture of f/1.9. On the front, the phone sports a 5-megapixel wide-angle (90-degrees) camera with an aperture f/2.2. Battery capacity of the Android 7.1.1 Nougat-based LG V30 is 3300mAh, with Quick Charge 3.0. Connectivity options you can look forward to include 4G LTE, Wi-Fi, Bluetooth 5.0, NFC, and USB Type-C 2.0. Like the Galaxy Note 8, LG V30 has IP68 certification for water- and dust-resistance, and comes with military-grade MIL-STD 810G rating for durability. The company has used Bang & Olufsen audio for sound enhancements, and comes with B&O Play headphones with three digital filters to adjust output.

While Samsung Galaxy Note 8 will arrive in the country quite soon, there is no official word yet on the LG V30 and Xiaomi Mi MIX 2 India launches yet. However, you can get them picked them up when they become available globally, which isn’t too far either as the former will hit the market this month, and the latter will go on sale this Friday. Let us know in comments which model you will choose among the three in the comments section below.