Xiaomi Mi 10i vs OnePlus Nord

OnePlus Nord and Mi 10i are both 5G-enabled devices

The Mi 10i is Xiaomi's first smartphone to launch in 2021, and is aggressively priced at Rs. 20,999 for the base variant. Undercutting the OnePlus Nord has helped Xiaomi make an impact in the sub-Rs. 30,000 price segment. Both these smartphones offer impressive hardware on paper, so we can imagine that it isn't easy for you to pick one between the two. Naturally, the best thing to do would be to put them in a head-to-head comparison and let them fight it out. We compare the OnePlus Nord to the Xiaomi Mi 10i to see which is the right one for you.

Let's start with the Xiaomi Mi 10i. While it is a part of the flagship Mi 10 series, its design is different compared to its more expensive siblings. The Mi 10i sports a big 6.67-inch full-HD+ LCD display with a hole in the top-centre for the selfie camera. It has Corning Gorilla Glass at the front and back, as well as on the camera module, which should help it resist scratches to some extent. The Xiaomi Mi 10i (Review) is bulky and weighs 214.5g which you will feel after holding it for a while. This phone is also IP53 rated for dust and water resistance which isn't very common at this price point.

The OnePlus Nord (Review) on the other hand, is slimmer and slightly smaller with the display measuring 6.44 inches. It's smaller than the Mi 10i in terms of length as well as width. The sleeker OnePlus Nord tips the scales at 184g, making it more manageable than the Mi 10i. OnePlus offers dual selfie cameras positioned in the upper left corner of the screen. The OnePlus Nord also has Corning Gorilla Glass 5 at the front and the back which is reassuring.

Both smartphones have quad-camera setups at the back but the arrangement is a little different. The circular camera module on the Mi 10i protrudes quite a bit compared to the capsule-shaped one on the OnePlus Nord. When it comes to security on these devices, Xiaomi has gone with a side-mounted fingerprint scanner while the OnePlus Nord has an in-display scanner. I found the button placement to be better on the OnePlus Nord since the power and the volume buttons are within reach on either side. You also get an alert slider on the Nord, which sits right above the power button. On the Mi 10i, all the buttons are on the right. The power button is convenient, but the volume buttons are slightly out of reach. 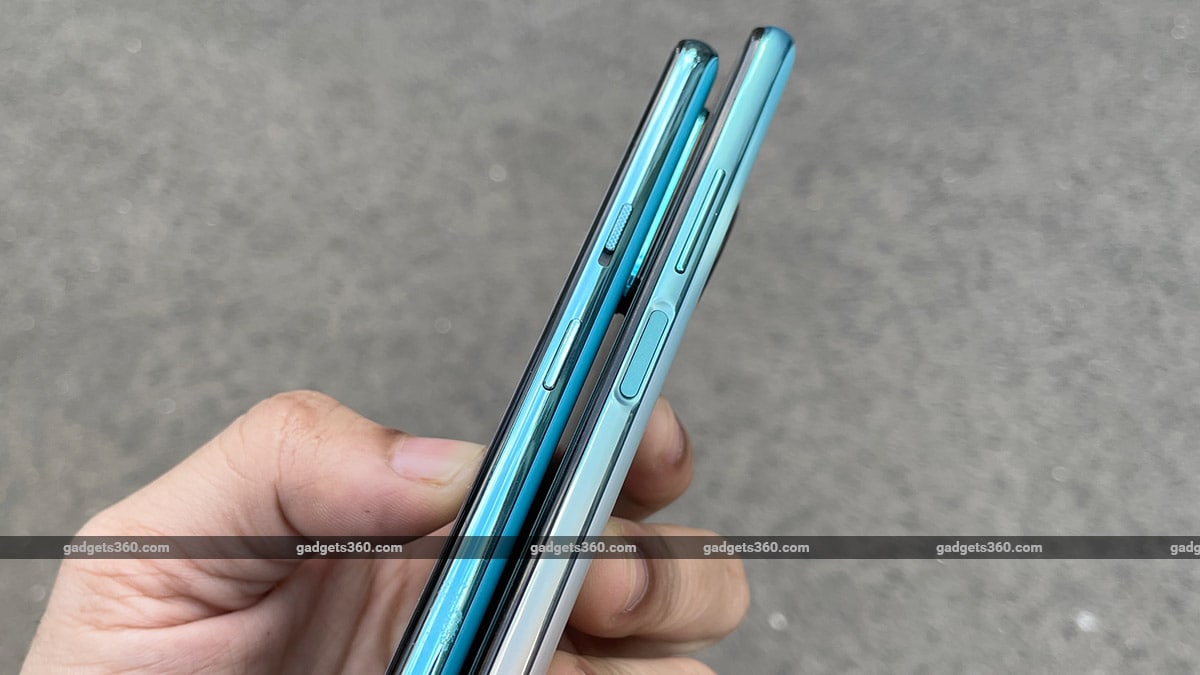 You'll find a USB Type-C port on each of these smartphones, but the Mi 10i also has a 3.5mm headphone jack and an IR emitter. If you would prefer to use your own wired headphones, only the Mi 10i will let you do that easily. You can buy the Mi 10i in three finishes: Atlantic Blue, Midnight Black, and Pacific Sunrise, while the OnePlus Nord is available in Blue Marble, Grey Onyx, and the new Grey Ash colour options.

OnePlus Nord vs Xiaomi Mi 10i specifications and software

The OnePlus Nord and the Xiaomi Mi 10i have a few key hardware differences. Just like other recent OnePlus models, the Nord has an AMOLED display with a fast 90Hz refresh rate. Xiaomi on the other hand has gone for an LCD panel but its refresh rate is higher at 120Hz. 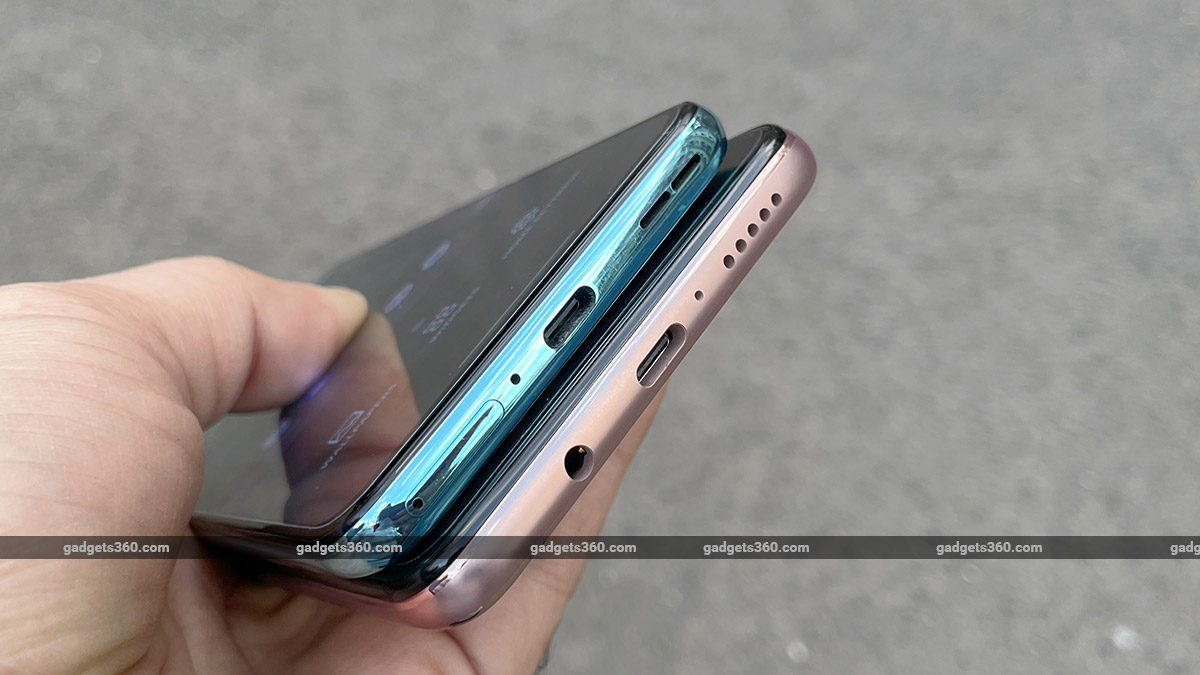 In terms of battery capacities, the Mi 10i packs in a bigger 4,820mAh battery while the physically smaller OnePlus Nord has a 4,115mAh battery. The OnePlus Nord comes with the company's own Warp Charge 30T charger in the box, while Xiaomi bundles a 33W fast charger.

Connectivity options on both smartphones include Bluetooth 5.1, Wi-Fi ac, and multiple satellite navigation systems including NavIC. The OnePlus Nord also has NFC, which the Mi 10i misses out on.

Both smartphones were running Android 10 with the December Android Security patch at the time of this comparison. Software is where the OnePlus gains a lot of points. Its interface is clean compared to MIUI on the Mi 10i, and you won't have any issues with ads. While both UIs are easy to use, Xiaomi's produced intrusive and spammy notifications. OnePlus promises two years of software updates and three years of security updates with the Nord. Xiaomi does not promise software updates and its track record isn't very promising either. The company is known to update MIUI while the underlying version of Android remains the same. If you like to stay up to date in terms of software, you'd be better off with the OnePlus Nord.

The OnePlus Nord and the Mi 10i both have powerful processors, and you won't have any issues with them when it comes to everyday use. The OnePlus Nord has an in-display fingerprint scanner while the Xiaomi Mi 10i has a side-mounted capacitive one, and I found both to be equally quick.

I found the display on the OnePlus Nord to be better, as the blacks really popped and contrast was better than on the Mi 10i. The OnePlus Nord's display also appeared warmer, which I prefer. You do have the option to tweak the display settings on both these smartphones so it shouldn't be a big issue. When set at 120Hz, motion on the Xiaomi Mi 10i appears smoother when comparing the two phones side by side.

Both smartphones have fairly loud speakers. The OnePlus Nord features UFS 2.1 storage while the Mi 10i has the newer UFS 2.2 standard, but this did not make a huge difference in our tests. 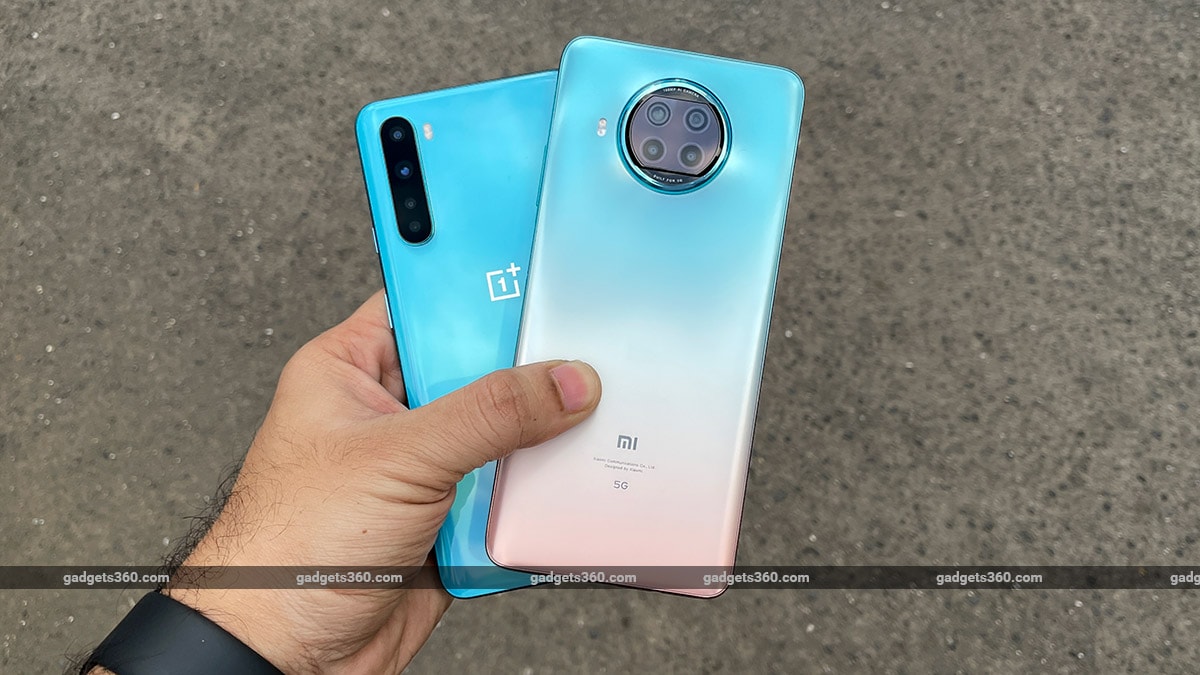 Both the OnePlus Nord and Mi 10i have quad-camera setups

You'll get decent battery life from both these phones and they should be able to go for over a day without any issues. The OnePlus Nord has a smaller battery, and lasted for around 14 hours, 30 minutes, in our HD video battery loop time, compared to 18 hours, 22 minutes for the Mi 10i. You get fast charging on both these smartphones, and both take about an hour to charge fully.

OnePlus Nord vs Mi 10i cameras

While the primary cameras are different, both smartphones shoot 12-megapixel photos by default as both phones use pixel binning. Xiaomi combines nine pixels into one while OnePlus combines data from four pixels.

Let's compare the primary cameras on these two smartphones first. In daylight, both phones are quick to detect the scene and meter light accordingly. Xiaomi tends to be aggressive with sharpening and the exposure wasn't always right. The OnePlus Nord on the other hand managed more natural-looking shots with the right exposure. 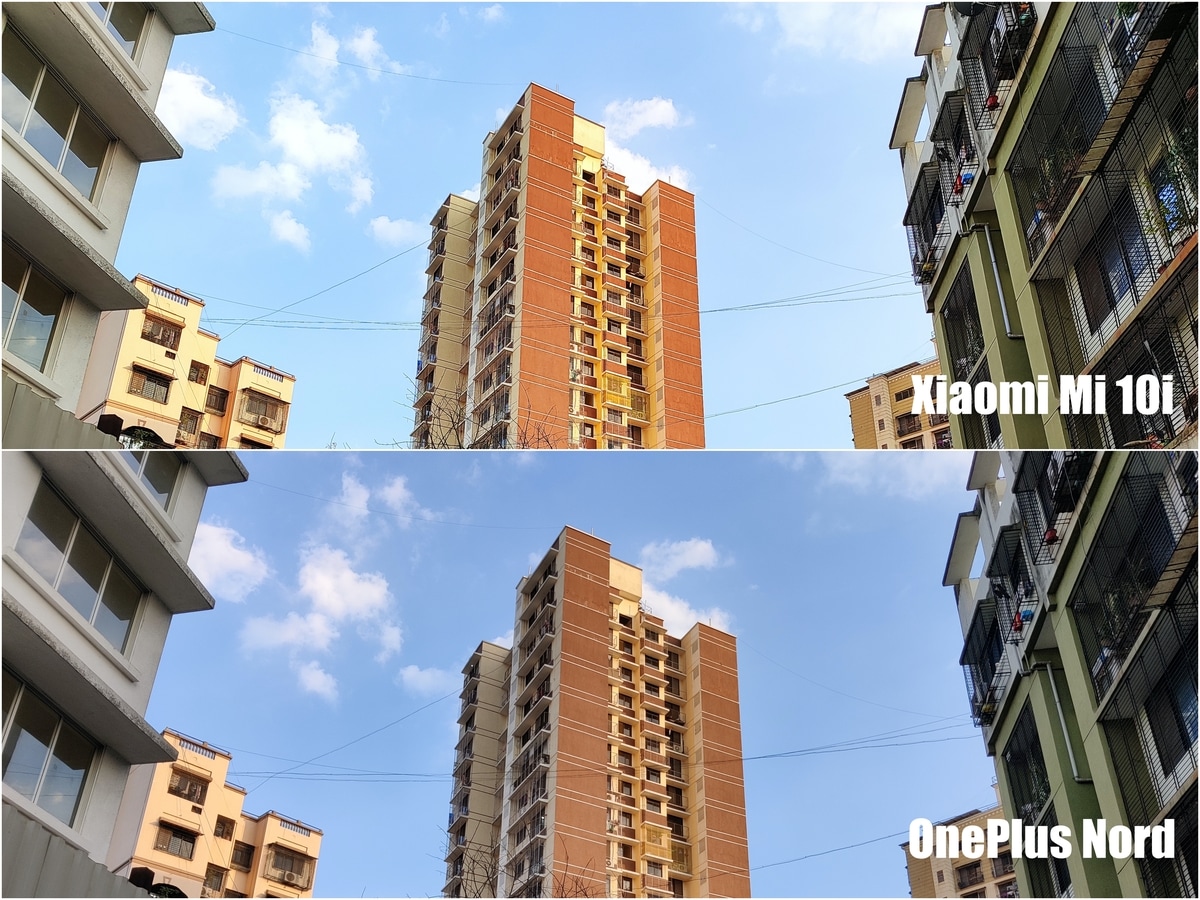 For wide-angle shots, I noticed barrel distortion at the edges of both phones' sample shots. You get a wider field of view on both, but it's the OnePlus Nord that offers slightly better dynamic range. Both phones' wide-angle cameras don't offer the same level of detail as their primary cameras, but the OnePlus Nord does edge slightly ahead of the Mi10i when it comes to details. 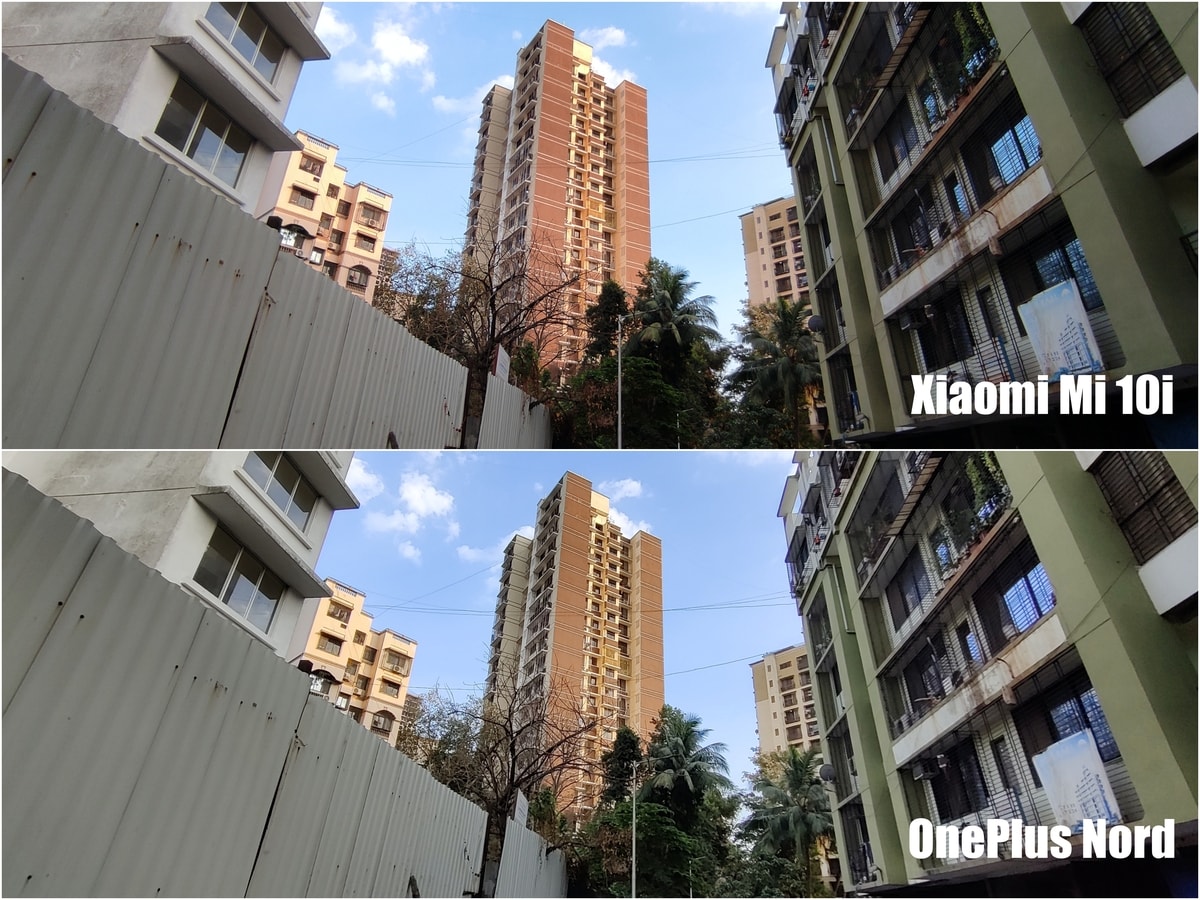 I was curious to see whether a 108-megapixel camera would give the Mi 10i an edge when it comes to full-resolution shots. The Mi 10i did manage to capture better details than the OnePlus Nord, and text at a distance was more legible.

The OnePlus Nord took the top spot for close-ups with sharper focus and better edge detection. The output from the Mi 10i looked dull in comparison. For macro shots, it is the Mi 10i that managed to capture more light and better details. When shooting portraits, I noticed that the OnePlus Nord does not detect objects very quickly, but does detect people and pets faster. It also does not let you set the level of blur before taking a shot. The Mi 10i on the other hand does let you do this, and can detect objects more quickly. Both phones managed good portraits. 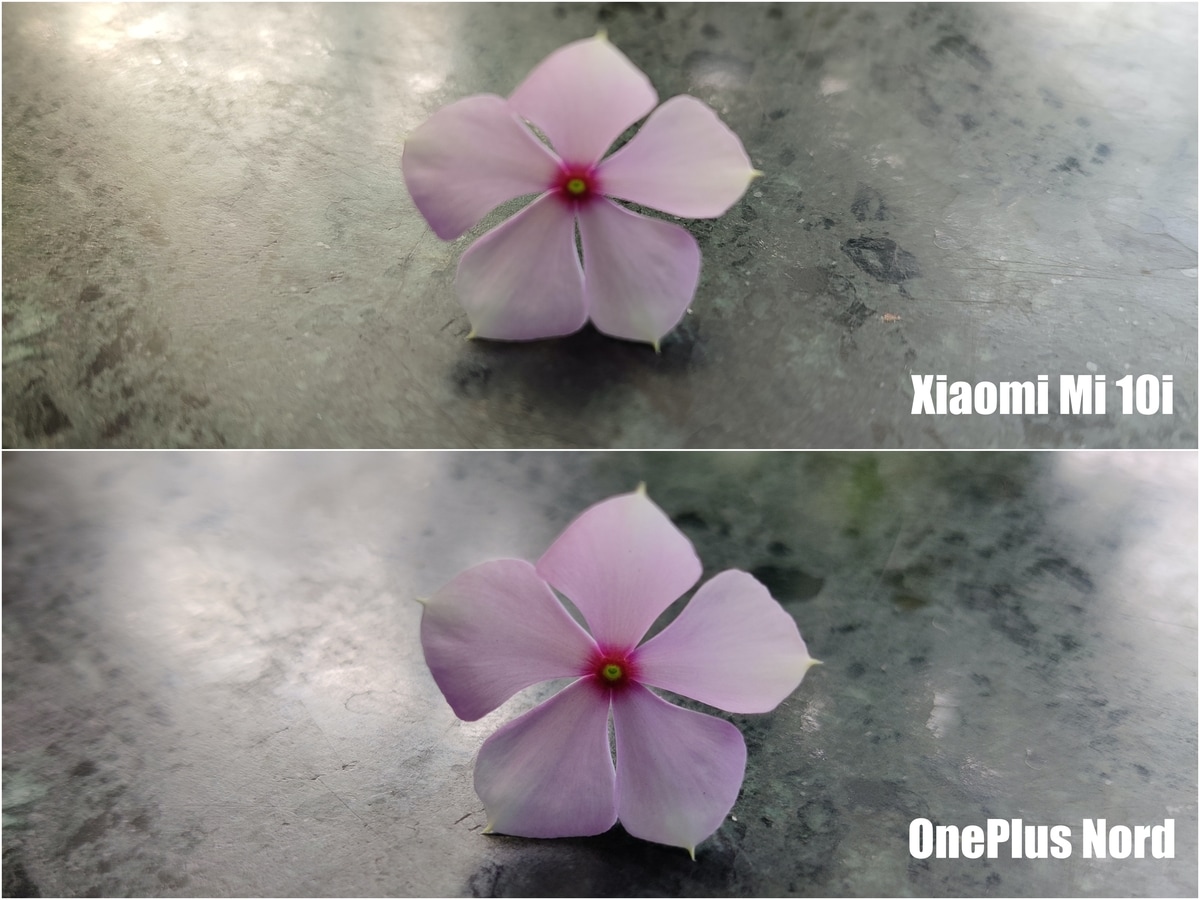 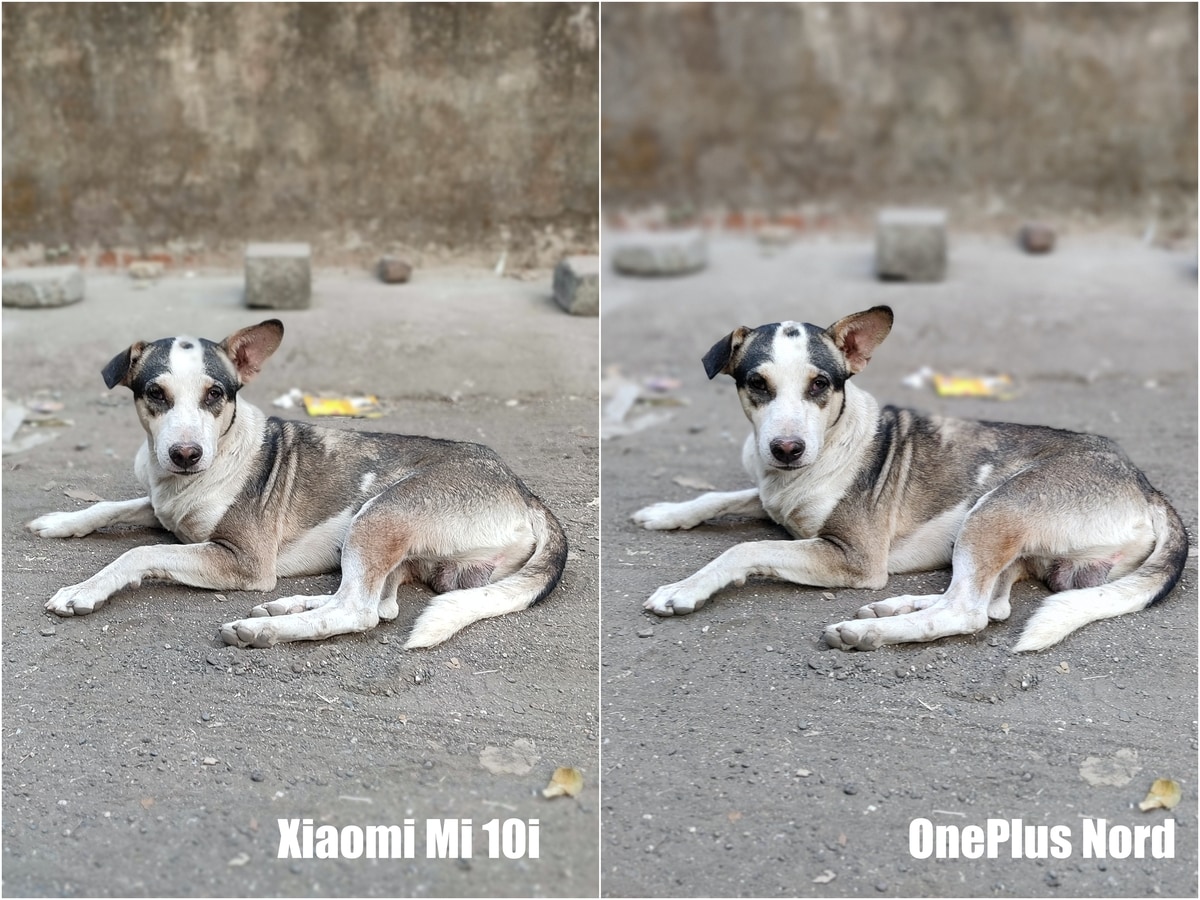 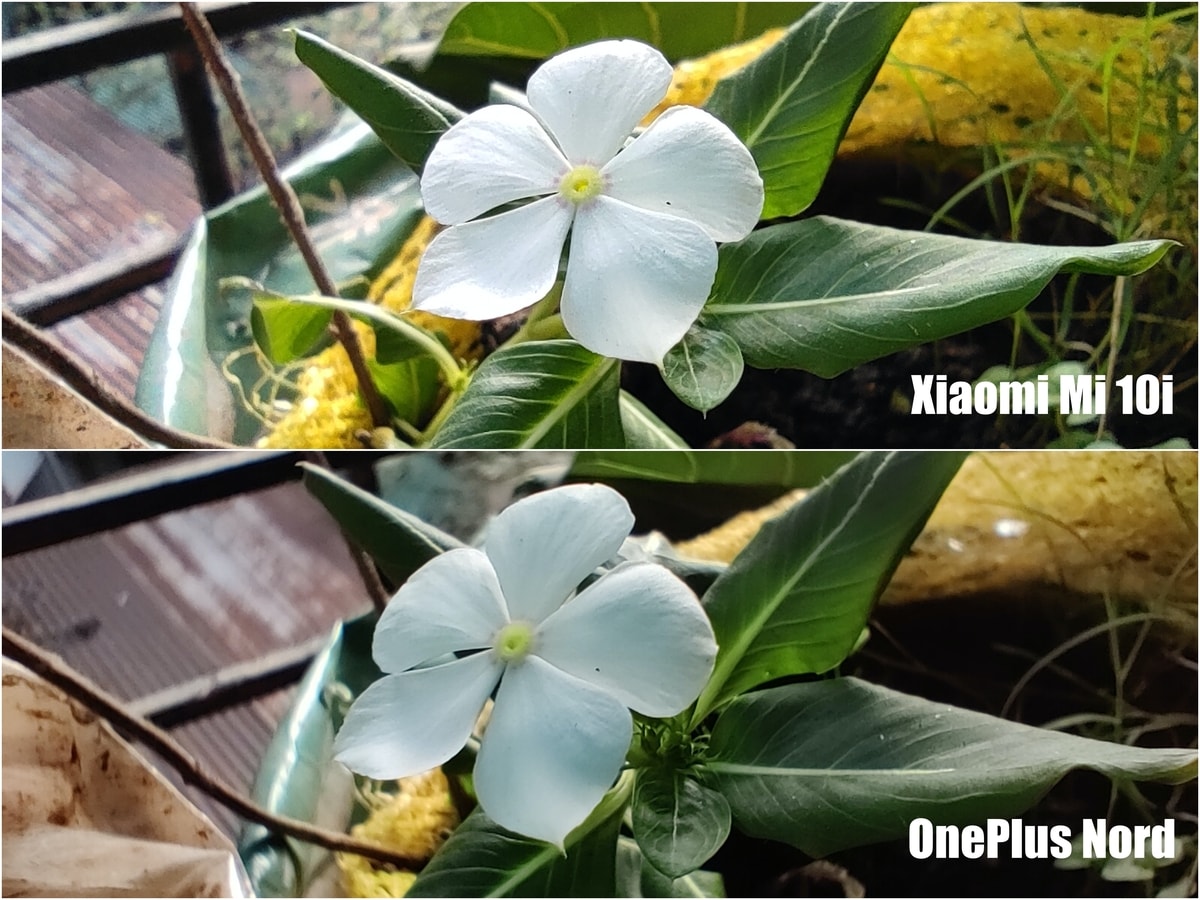 In low light, the AI implementations on both phones are still quick to detect scenes. The shot taken with the Mi 10i appears good as is, but the OnePlus Nord offers better details. With Night mode enabled, both phones take around 3-4 seconds to take a shot. These phones produced slightly different colour tones, and while the Mi 10i's results looked better at first, it was the OnePlus Nord that was more accurate and balanced. Xiaomi also tends to sharpen photos, which caused a loss in details. 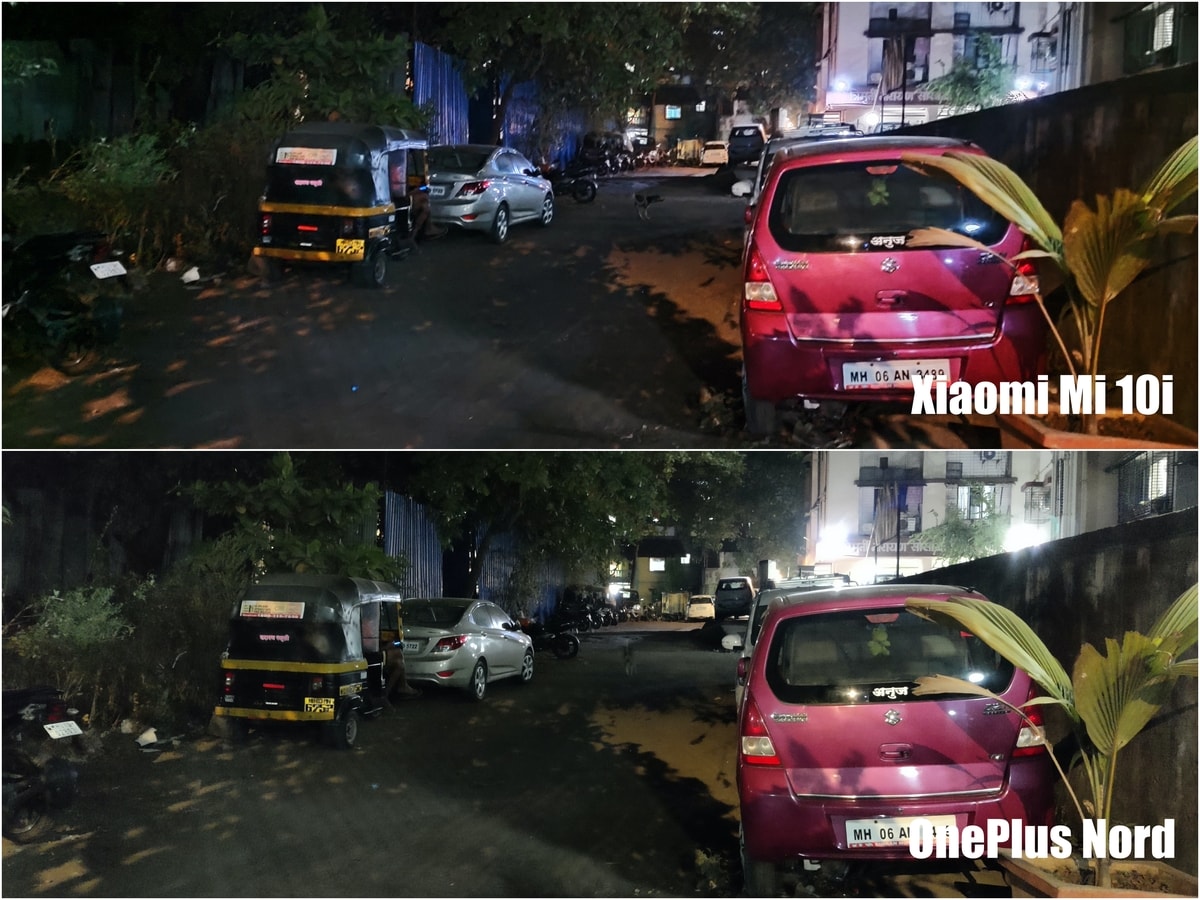 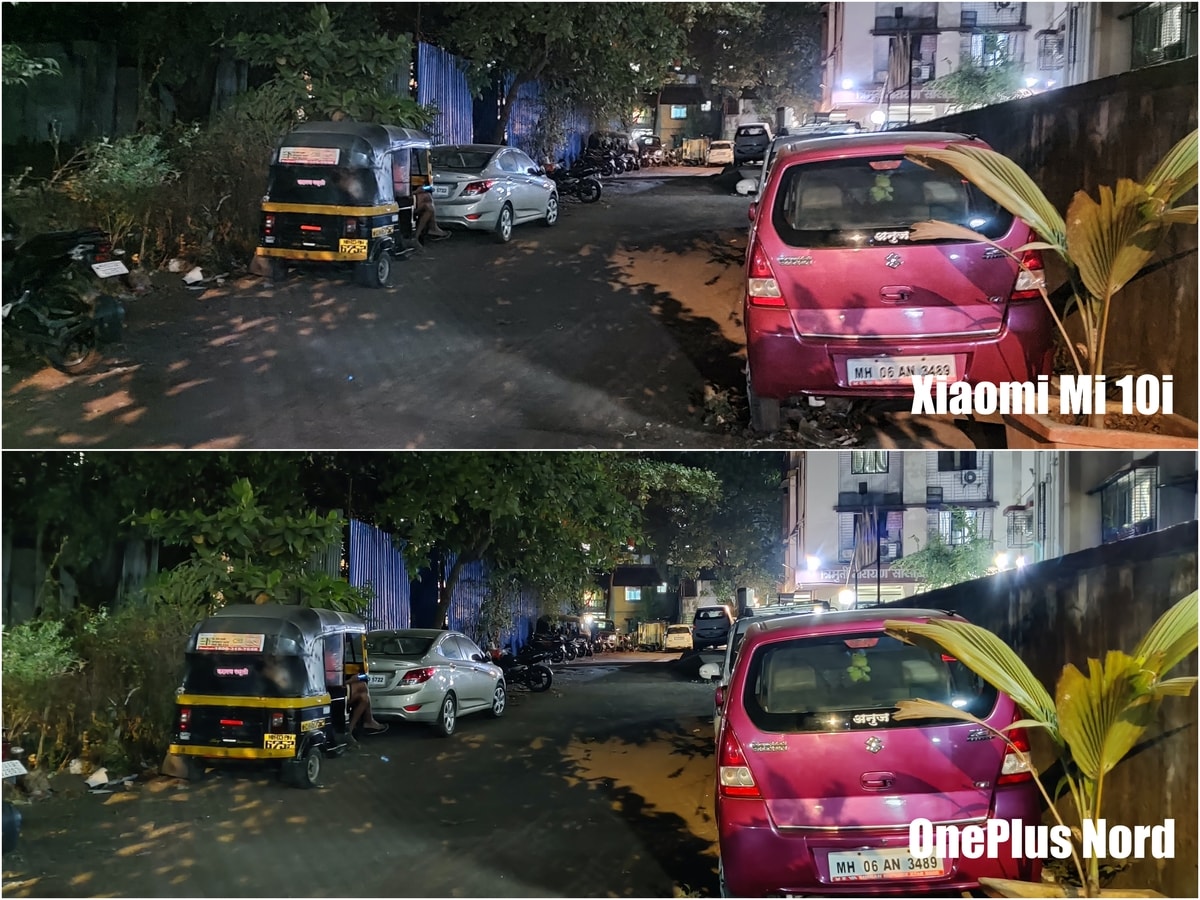 The OnePlus Nord has the edge with selfies thanks to a bigger sensor, and they came out brighter with better details. Both phones let you capture portrait selfies and managed good edge detection, and once again, the OnePlus Nord managed better, brighter images. Low-light selfies were better on the Mi 10i, since the frame was better exposed and had better details. 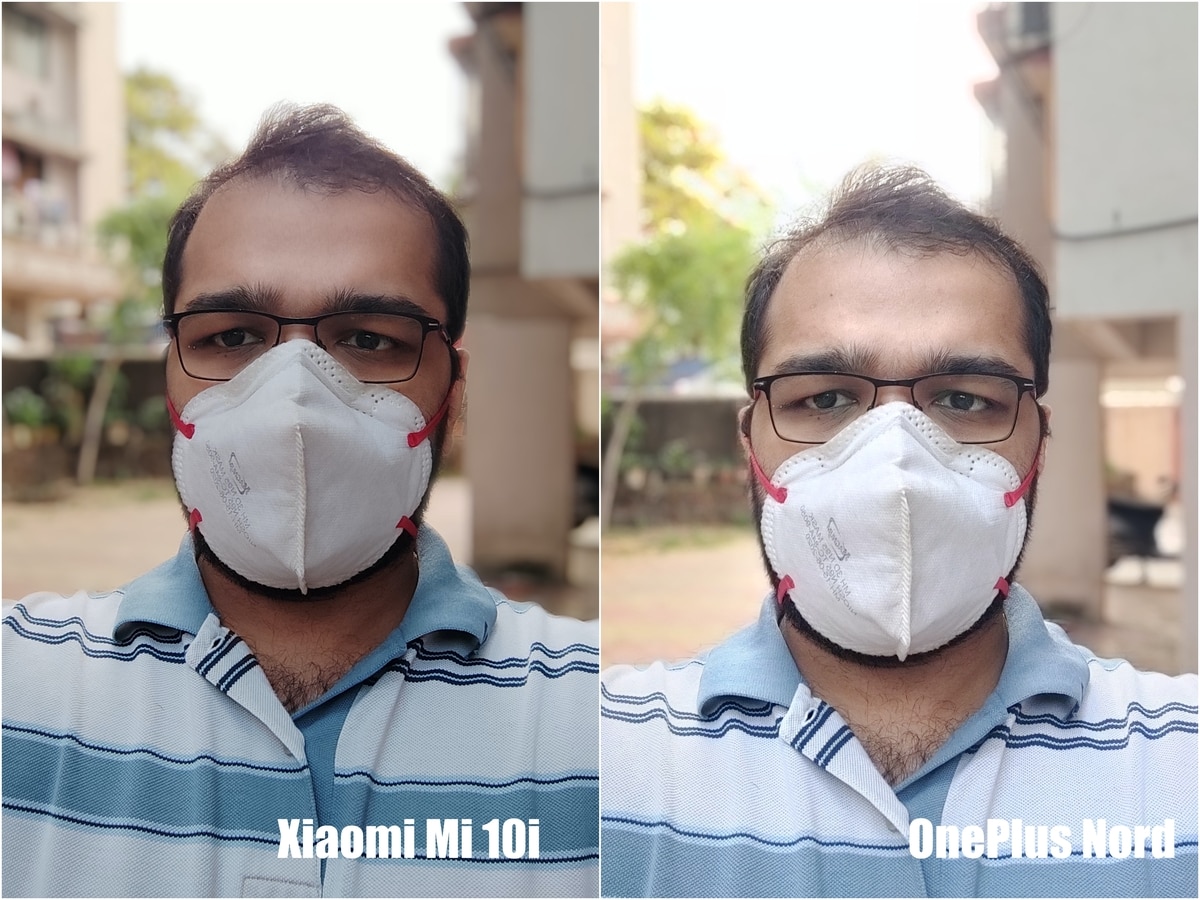 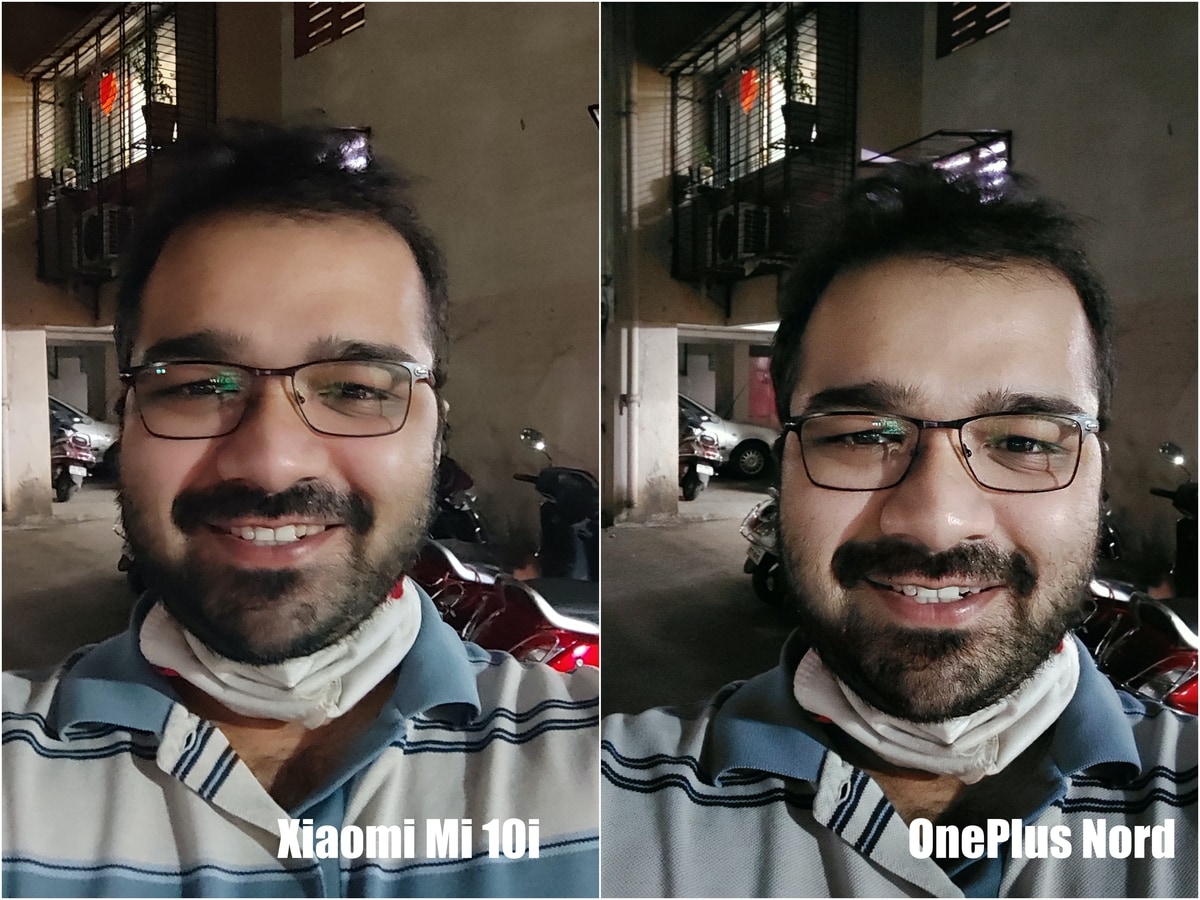 If you are looking for the best smartphone under Rs. 30,000, I'm sure these two options will pop up. They offer powerful performance and better value than some of the other smartphones in the market. Money no bar, if you had to pick one of the two, it should be the OnePlus Nord (Review). It offers better hardware and better cameras, and OnePlus has a better track record when it comes to software updates. The Xiaomi Mi 10i (Review) isn't way behind, but it's worth considering only if you have a very tight budget to stick to.

Further reading: Xiaomi Mi 10i, OnePlus Nord, Mi 10i vs Nord, OnePlus Nord performance, Mi 10i performance, OnePlus Nord vs Mi 10i Cameras
Aditya Shenoy Email Aditya
Aditya Shenoy reviews smartphones, wearables, headphones and speakers for Gadgets 360, out of Mumbai. Aditya is a reviewer for Gadgets 360 and has written extensively about smartphones, software updates, and upcoming devices. Aditya is available on Twitter at @adishenoy, and you can mail him at adityashenoy@ndtv.com, so please send in your leads and tips. More
Signal App Getting Features That Mimic WhatsApp Experience
5 Best BSNL Recharge Packs for Data